The US Department of Homeland Security is developing a 240MP 8fps 'super' camera. We spoke with them in depth and prepared the following report on key technical, operational and pricing details:

One of the main problems of tracking suspects with PTZs is that once operators “zoom in on a specific point of interest, they lose visual contact with the rest of the scene,” an issue the Department of Homeland Security Science and Technology Directorate (DHS S&T) finds problematic. Indeed, this is a core issue in choosing between PTZs and panoramic cameras. While the latter maintains 'visual contact', it is with incredibly low detail (see our panoramic test results).

With this in mind, and after talking to law enforcement, airport security directors and field agents, DHS S&T set out to develop a new camera system to provide a complete 360 degree view  with incredibly high detail. Named ISIS, (the Imaging System for Immersive Surveillance) the new system is comprised of (48) 5MP imagers and software that produce a single image of a complete scene. The system was developed at MIT Lincoln Laboratory under DHS S&T sponsorship.

For this note, we reviewed the patent for ISIS and spoke with Dr. John Fortune of of S&T’s Infrastructure and Geophysical Division [link no longer available].

DHS S&T has been working on the ISIS project for around five years. The idea for ISIS came from talks between DHS and local law enforcement, aviation security directors and DHS field agents. “The first question we asked is ‘What are you not seeing in a novel surveillance system?’ and one of the things that kept coming up was multi-camera coverage of a scene,” Fortune said. “We came up with a single system that would give you high-resolution detail everywhere in real time, but would also be stored in a data-friendly compressed format so that it could be archived and produced later for forensic searches.”

The images below show the first and second generation units:

Here is a view of the current generation mounted in the field (note: Mounting a 360 degree view camera on the corner of a building wastes ~90% of the FoV, an equivalent of 60MPs for this system). 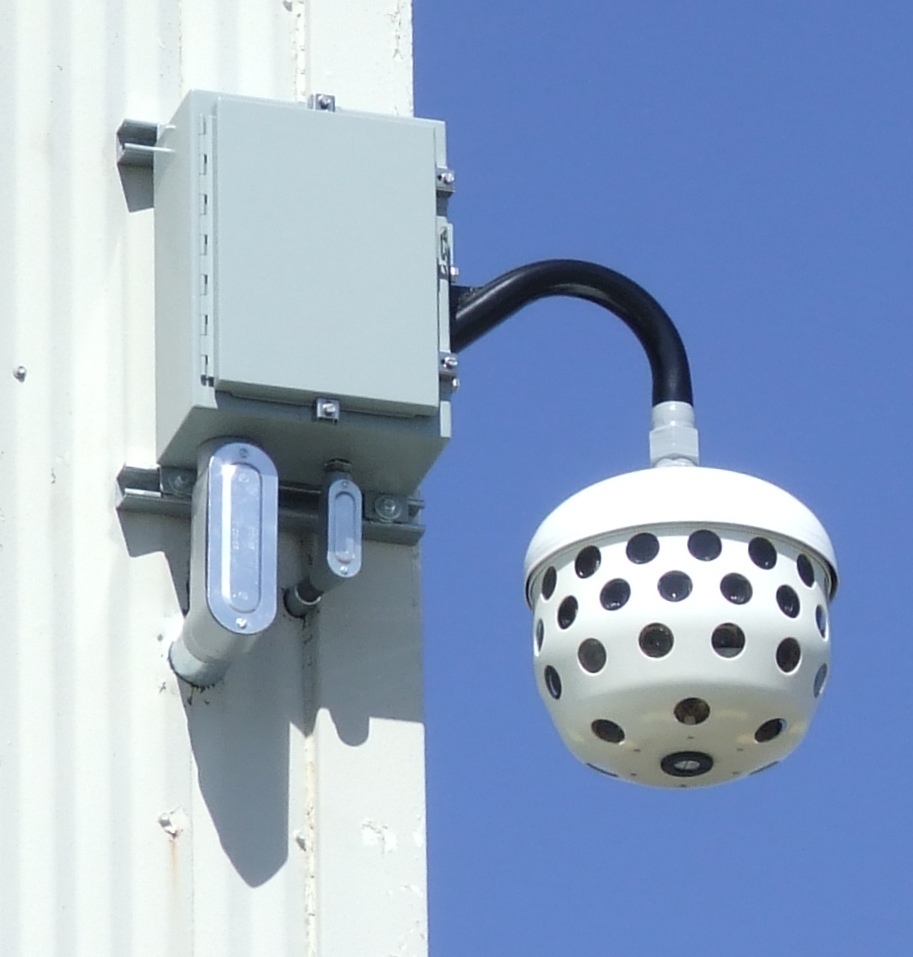 The first prototype was compromised of nine 11 MP outward facing cameras arranged in a rounded housing. Initially there were issues stitching the images together because of uneven overlap of the images. DHS says this problem was fixed in the first generation system which is currently part of a pilot project at Logan International Airport. The second generation system was tested outdoors on street scenes and is more of a cylinder shape. The third generation of ISIS will have upgraded sensors and software improvements based on the results of these pilots.

Fortune says ideal deployments for ISIS would be in large spaces with lots of activity, like airports, stadiums and even Times Square.  However, ISIS was not made to replace cameras, but to “supplement them in appropriate areas,” Fortune says.

Researchers we spoke to say ISIS can "provide centimeter class resolution (approximately 1.2 cm) everywhere within a radius of 100 meters from the sensor, for a total 240 million pixels at 8 frames per second." Additionally, they say ISIS can produce clear facial details of anyone within 100 meters. We are waiting to hear back on what level DHS uses as its threshold for facial identification.

ISIS is comprised of 48 lenses offset in rows at various focal lengths, according to DHS S&T. It uses a combination of shorter and longer focal length lenses to keep the resolution constant across the space the cameras are viewing: 25mm lenses, 9.6 mm lenses (scene coverage from 20 to 50 meters), and a wide angle downward -pointed 1.3 mm lens OR a 2.5 mm lens (scene coverage from 0-10 meters), according to patent information. This approach is somewhat similar to Dallmeier 's Panomera though ISIS is focusing on a wider FoV.

The screenshot below overviews the controls and display for the prototype camera: 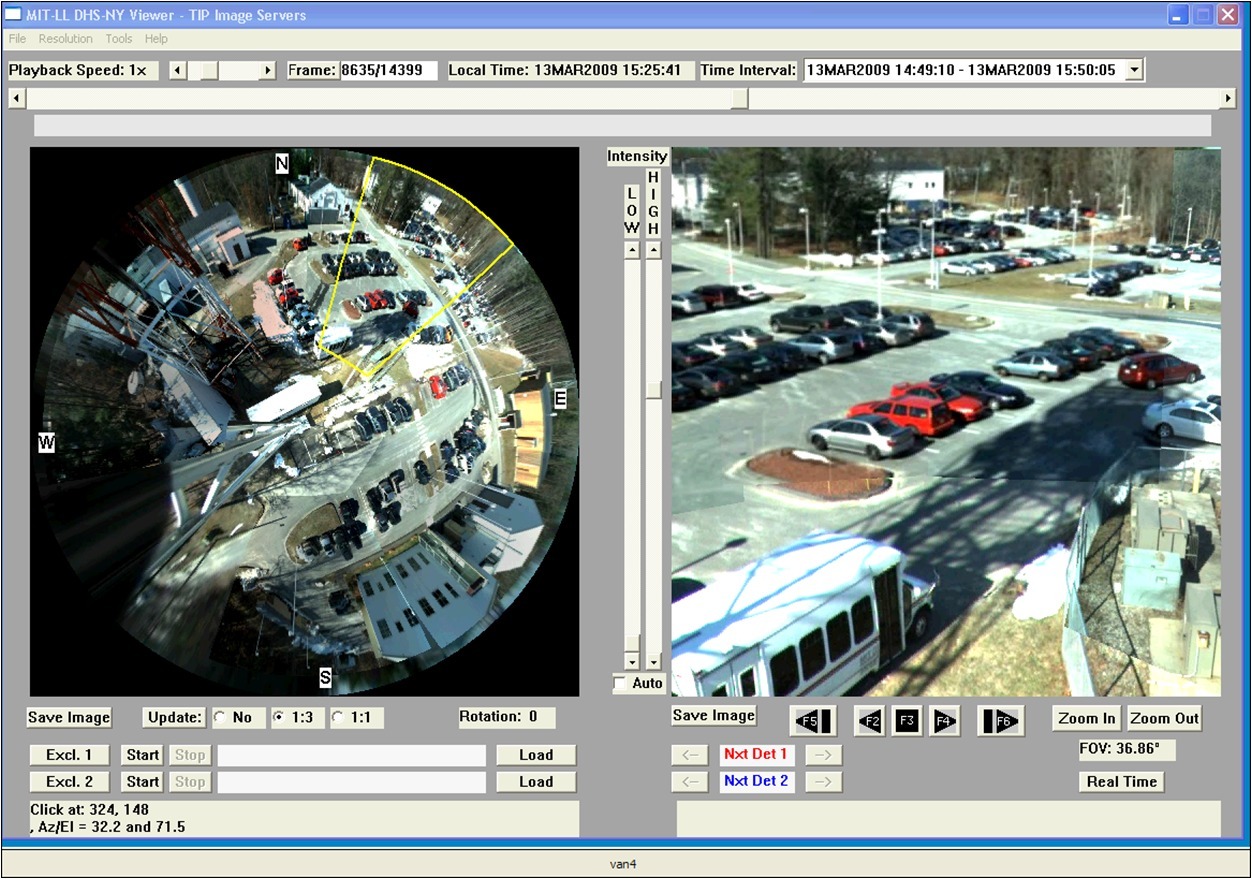 DHS does not recommend this for use in low light situations. We would expect, given the high pixel count (5MP), high F stop (2.0) and relatively small size of each imager, that its low light performance would be poor.

“The system has been primarily been a hardware development exercise and software has focused on supporting data processing and compression. We haven’t gotten really deep into what we can do in the video analytic space, but we do have some standard video analytic features like automated tracking, exclusions zones, and filtering out backgrounds,” Fortune said. DHS S&T is looking for a way to make its “track and follow” feature more effective in dense crowds and lines. For example, if someone is standing behind someone in a line for a period of time, that could throw the tracking off, Fortune said.

ISIS has not been integrated with any commercial systems (such as VMS or PSIM).

The housing for the prototype at Logan Airport was created using 3D printing, but is not weatherproof. ISIS was created as an indoor system, but end users have expressed interest in outdoor versions. For example, ISIS was tested outdoors by request of an undisclosed agency and in Boston in 2011. The second generation sensor successfully operated outdoors for several months, and future generation sensors will be weatherproof, says DHS.

ISIS is not commercially available today. Moreover, DHS is looking for a commercial entity to contract manufacturer the unit.

DHS S&T recently issued a request for information to the surveillance industry to get feedback on what it’s going to cost. “We have a cost in mind, but it’s going to be hard to predict the finalized cost,” Fortune said. “We’d like to be in the $50,000 to $150,000 range but that’s a big range ... It’s going to be something that is competitive with the more advanced systems out there right now that people are using to cover large areas.”

Says Fortune,"DHS S&T is developing the technology [for use in airports and critical infrastructure facilities] but the decision to purchase and install will be made by end users."

This is an ambitious project that, if delivered in the next few years, would likely far surpass anything commercially available for its combination of super high resolution and relatively fast frame rate. That noted, DHS is obviously still fairly far from releasing a generally available production unit. While this is definitely worth tracking, only time will tell if they can deliver on this.