The US Holocaust Museum has released a detailed report about how Uyghurs are at "serious risk of genocide" by the PRC government, citing IPVM's recent expert testimony on Uyghur face detection at the Uyghur Tribunal.

Such "highly invasive" techniques of "mass surveillance" are used to facilitate Uyghurs' "mass incarceration", one of the key factors putting Uyghurs at "serious risk of genocide", the report states. The PRC government has derided the "genocide" designation as "a joke" and "lie of the century".

The US Holocaust Memorial Museum in Washington DC is the world's preeminent Holocaust museum and also houses the Simon-Skjodt Center for the Prevention of Genocide, which aims to "do for the victims of genocide today what the world failed to do for the Jews of Europe in the 1930s and 1940s".

The Center routinely publishes reports on various at-risk minorities, e.g. Rohingyas in Burma (Myanmar), Yazidis in Iraq/Syria, etc. On Tuesday, it published "'To Make Us Slowly Disappear': The Chinese Government’s Assault on the Uyghurs":

In its section on "mass surveillance", the report cited IPVM's expert testimony at the Uyghur Tribunal in London on "the use of advanced analytic technologies by the Chinese government" including "Uyghur Face Detection" to determine if a person is Uyghur:

The entire 1-hour IPVM testimony and questioning by the Tribunal may be watched below:

The Uyghur Tribunal is itself investigating whether genocide is occurring and plans to announce a result on December 9.

The Holocaust Museum's report describes mass surveillance against Uyghurs as "a tool used by China to facilitate the targeting of Uyghurs for imprisonment", stating these measures go "far beyond any reasonable counterterror methods" targeting Uyghur civilians "as a whole":

The Museum cited this "mass incarceration" as one reason it is "gravely concerned" of a "serious risk of genocide" against Uyghurs, along with "repression and violence" on basis of "ethnicity and religion":

This is a change from 2020 when the Museum determined "crimes against humanity" but not genocide. The change was attributed to reports of the PRC going "beyond a policy of forced assimilation" by sparking "a sharp decrease in Uyghur birth rates" through forced sterilization and other measures, along with expanded surveillance and camps:

The measures against Uyghur reproduction in particular raise concerns of the PRC's intent to "biologically destroy the group, in whole or in substantial part", a key part of the legal definition of genocide under Article II of the 1948 UN Genocide Convention: 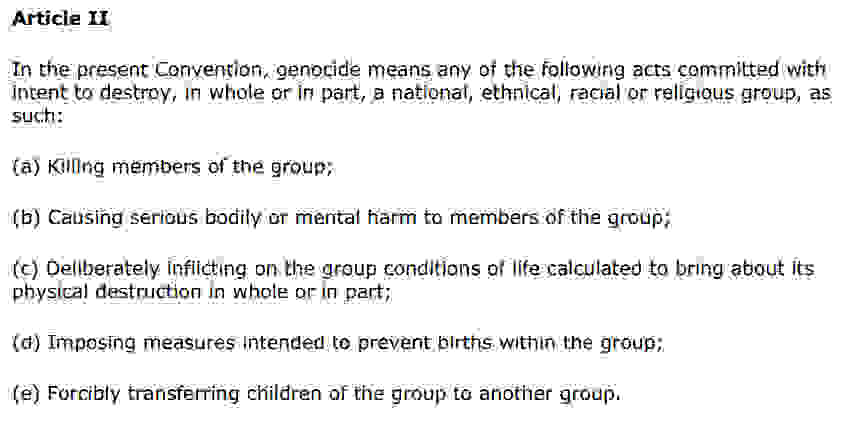 The report recommended "financial sanctions targeting commercial entities that are supporting China's repressive policies", noting some of these have already been taken by the US, but "they could be expanded". The report also suggested that "Like-minded states could establish a joint mechanism to coordinate a sanctions strategy".

Indeed, the current Entity List human rights sanctions "could be expanded" as they are limited to US exports and have even been sidestepped altogether by SenseTime.

PRC No Response Yet

The report called directly on the PRC government to "immediately halt the commission of mass atrocity crimes" and allow for a full, open investigation by journalists and human rights investigators. The PRC has yet to respond to the Museum's report; IPVM will update if it does.

The report's call for further and global sanctions on "commercial entities that are supporting China's repressive policies" increases the long-term risk of further actions against Hikvision, Dahua, and other PRC surveillance firms deeply involved in Xinjiang.

Additionally, by calling out Uyghur Face Detection/Uyghur Alarms and linking it to potential genocide, the report makes it clear that there is zero justification for this racist technology.

Although the Holocaust Museum did not explicitly declare that the PRC is currently committing genocide, this makes it clear that genocide accusations are not just 'geopolitical' but well-founded and deeply troubling.

This stands in stark contrast to PRC state media which has painted the genocide accusations as "fabricated" and part of Western "geopolitical agendas" while PRC Foreign Ministry spokesman Zhao Lijian has called it "a joke" and "lie of the century".

However, it is much easier to paint the US government (which declared genocide earlier this year) as inherently biased compared to the Holocaust Museum, the world's foremost authority on the most well-known genocide in history.

UK Labour MPs Call For Hikvision Procurement Ban, "Root This Out" on Oct 11, 2022
Two UK Labour Party politicians are calling for a national strategy to ban...
Uyghur Tribunal PRC Verdict: "Invasive Surveillance" Are "Crimes Against Humanity" on Dec 09, 2021
The Uyghur Tribunal has reached its verdict, determining that the PRC (China)...
Comments (10) : Subscribers only. Login. or Join.