Hikvision is the most valuable video surveillance company in the world, going public in 2010 at $6 Billion USD and now trading at over $7 Billion USD, far higher than Axis Communications. Even in total revenue, Hikvision tops Axis. However, Hikvision is greatly dependent on Chinese government projects. Plus, while their DVRs perform well, their IP cameras have not.

In Hikvision's newest generation of IP cameras, the company is claiming strong WDR and the world's lowest bandwidth consumption. In particular, they cite the DS-2CD864FWD-E [link no longer available], a 720p HD cameras as their top offering. As such, we wanted to see if Hikvision could come close to those claims or was simply marketing bluster.

In this test report, we share our findings of testing the Hikvision DS-2CD864FWD-E (called the '864' hereafter) against top performers from two of the world's most respected camera manufacturers - Axis and Sony - in particular the new Axis Q1604 and the Sony CH140 and Sony CH240.

We performed a series of simultaneous tests in 3 demanding scenes:

Inside, we dig into the details and provide answers on who performs the best in each condition.

For those looking for strong image quality at reduced prices, this Hikvision 864 camera is a viable alternative to top offerings from leading network camera providers like Axis, Sony and Panasonic. While the camera can benefit from some usability refinements and does not have the depth of features and support as Axis, the Hikvision camera's video quality and bandwidth consumption is quite close to the 'best' high end cameras out there. Minimally, this Hikvision camera is equal to, and superior in many ways to low-cost offerings from Taiwanese vendors like ACTi, Vivotek as well as the US's Arecont.

The video below overviews key settings and functionality as performed in the new and far improved Hikvision web user interface. We review WDR settings and low light options in particular:

Compare this to the clunky, challenging interface in Hikvision's previous generation network cameras.

The key element in Hikvision's WDR is setting the dynamic range level. Hikvision provides a slider between 1 and 100 with 1 being the least WDR and 100 being the most. As these comparison below show, while 100 delivers the strongest dynamic range enhancements, it moderately increase noise and can reduce low light performance.

The comparison below shows the 4 cameras in an indoor/outdoor scene. The Hikvision 864, at its default level 1 WDR does not perform well: 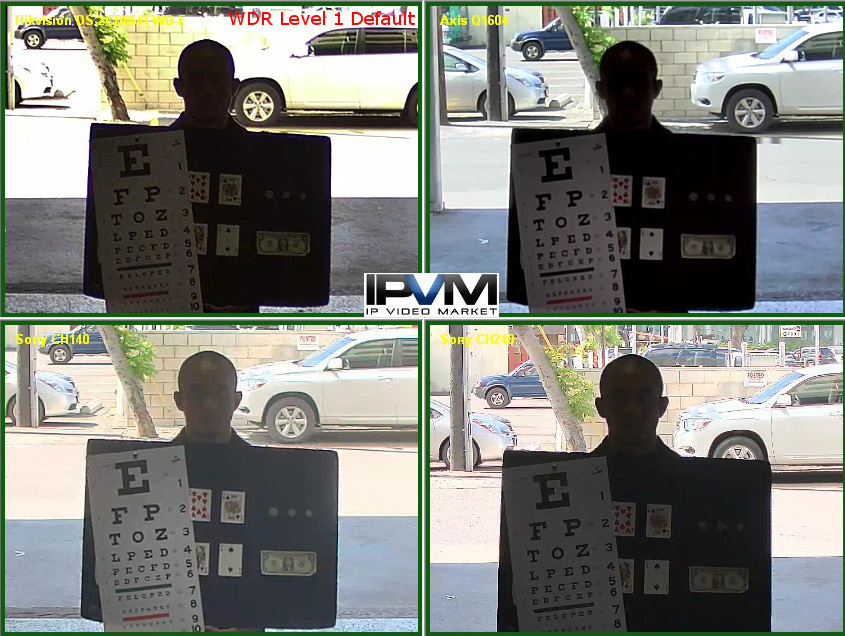 However, when the Hikvision's WDR level increases to 100, its performance increases significantly and is now equal or better than the Sony cameras: 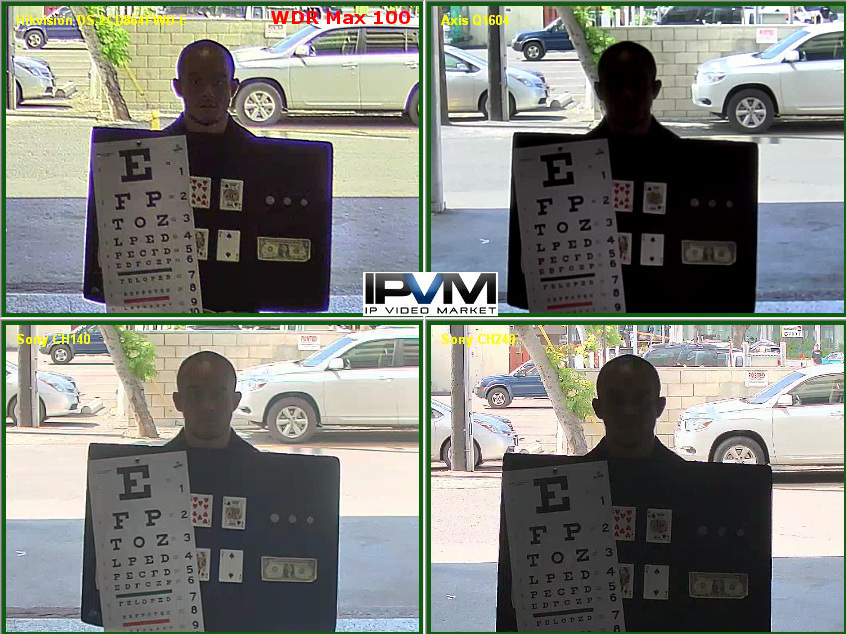 The image below shows Hikvision with the two WDR extremes side by side; On the left, WDR is at its default lowest level while on the right it is slide to its highest level:

However, as the comparison below shows, setting WDR at 100 increases noise modestly. The second row where we zoom into the chart shows this more clearly: 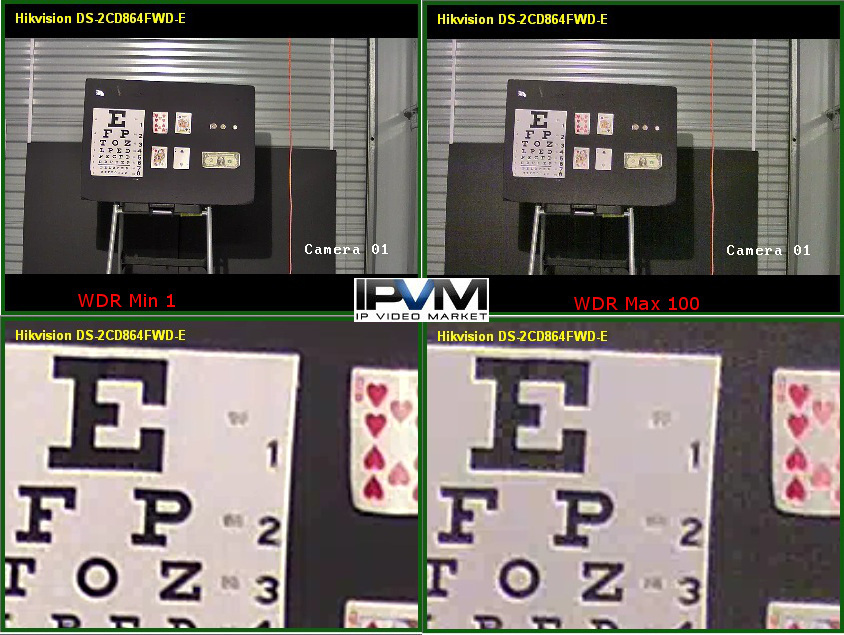 In practical terms, the amount of noise is not a huge difference but it might reduce captured details in objects at a very wide FoV.

However, in the scene above, Hikvision automatically turned off WDR at the 100 setting after about 5 seconds. As such, it should not be a significant practical concern. We believe Hikvision's approach of automatically turning off WDR is sensible and something that major manufacturers like Axis in their Q1604 lack.

In this series, we compare Hikvision's performance in progressively wide FoVs, starting with 20 feet. In the comparison below, Hikvision is equal to slightly better to Axis but worse than both Sony's: 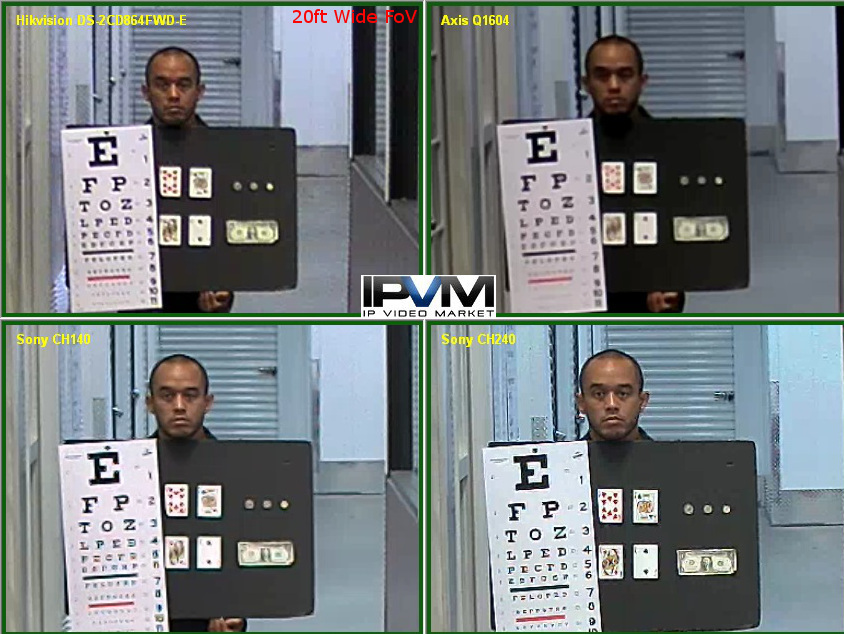 The pattern continues at 40 feet: 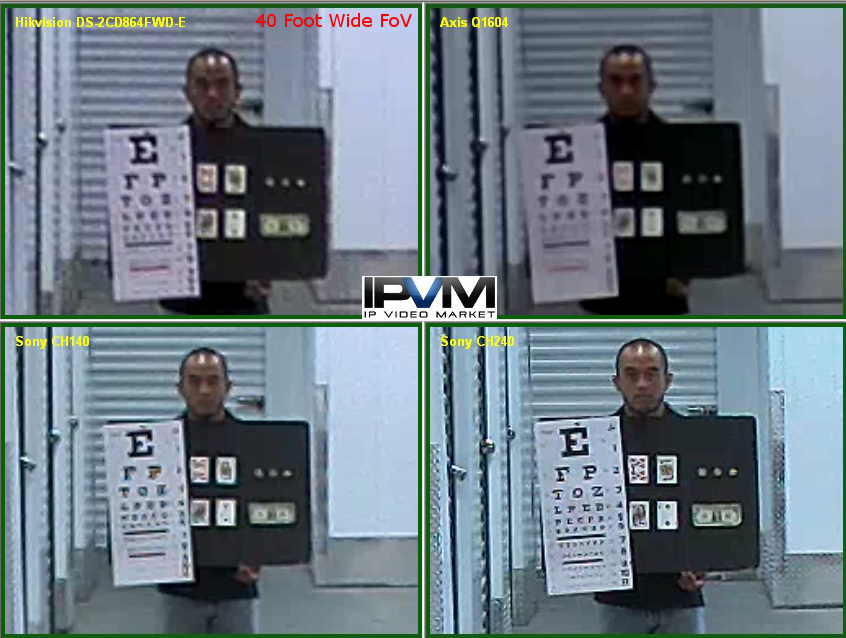 At 80 feet wide, the big factor that becomes visible is the increased noise captured. Note: this is at Hikvision WDR setting 1. At 100, this would be higher: 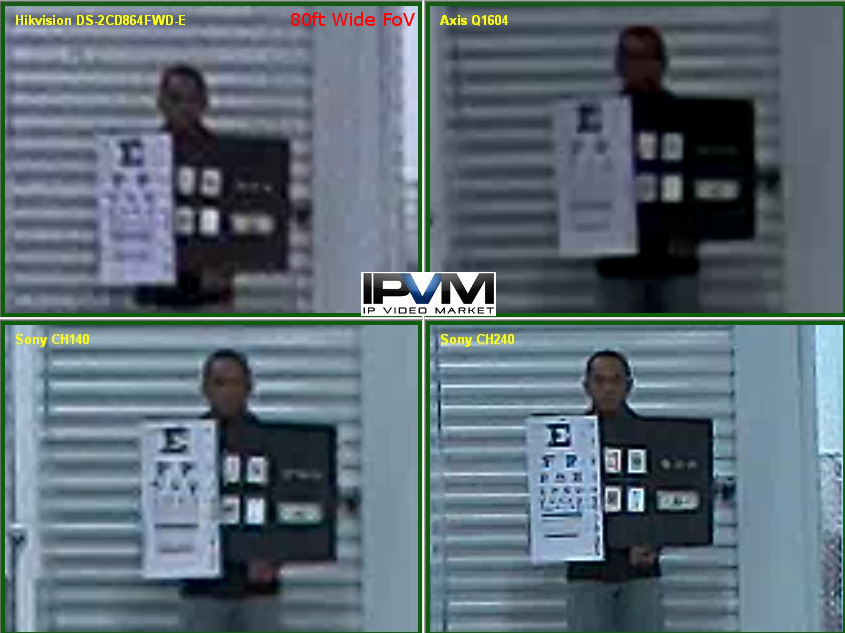 In low light, Hikvision was notably worse than the Axis Q1604 but better than both Sony's. Here is a comparison with the full FoV: 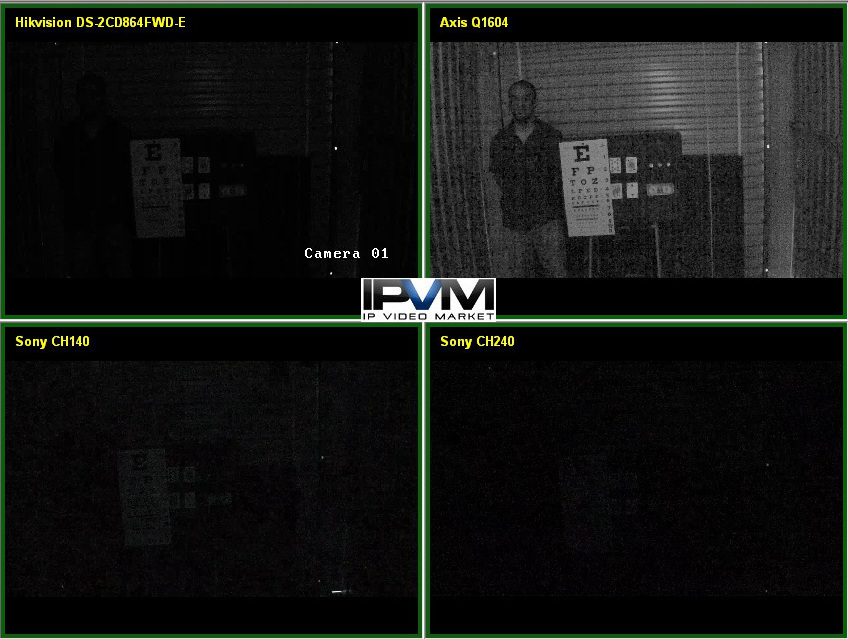 The comparison below zooms into the eye chart, showing the same relative performance differences: 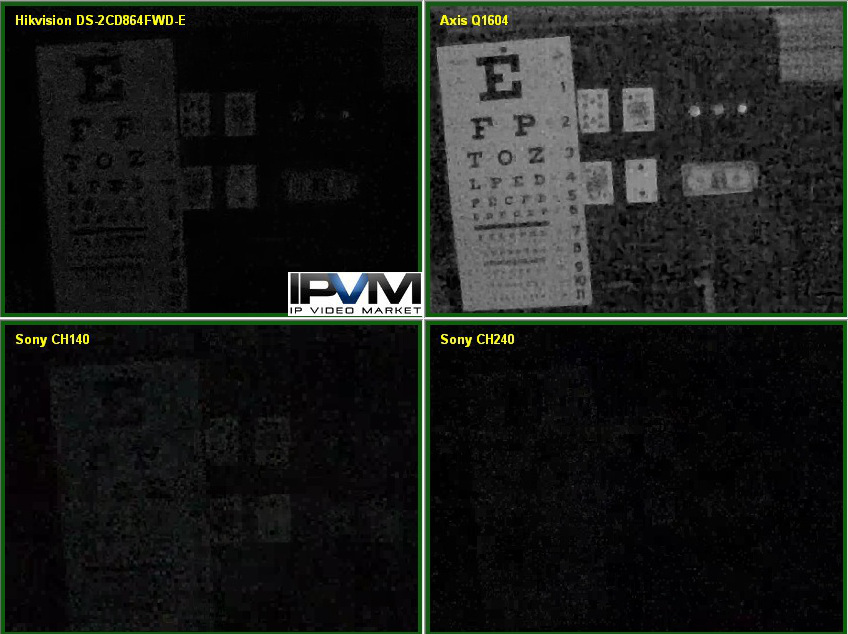 Note: the Axis Q1604's default shutter is shorter, at 1/44s, than all other cameras in the test. This is due to it being the max with WDR on and without complex configuration. Once, the Q1604 supports automatic simple shut off of WDR at night, its low light advantage will increase further.

The Hikvision 864's bandwidth consumption is solid but confusing:

While Hikivision supports baseline, main and high H.264 profiles, we only tested baseline. Exacq, the system tested with, only supports baseline for this camera. Using high profile, there is potential for modest bit rate reductions. Check if your VMS supports that profile.