In the past week, one of Asia's largest publications, the South China Morning Post (SCMP), posted an article about "Chinese [facial recognition] technology" (i.e. Hikvision) being used by the NY city police department.

The problem is - the story is false.

Nonetheless, the story has gained international attention, both as a sign of Chinese technological superiority and, less favorably for Hikvision, Chinese infiltration of the United State's 'biggest city'.

In this note, we examine the SCMP story, explaining:

SCMP has grossly misread a 5-year-old Hikvision case study, conflating a budget (non-AI / non-facial recognition) video surveillance system used by a low-income housing project that the NYPD was allowed to view with some form of advanced, cutting edge AI.

Thousands of Sky Net cameras, aided by artificial intelligence (AI) software, have monitored River Park since 2014, according to the Hikvision website.

Indeed, it would not make any sense since Hikvision was not even claiming to offer "AI software' in 2014. And to the contrary of 'Sky Net cameras', the Hikvision case study specifically lists the cameras used - "DS-2CD7133-E Mini Dome Camera and the DS-2CD2012 IR Mini Bullet Camera" which are budget cameras, even for 2014 standards.

Indeed, if this is what 'Sky Net' is or was using (even in 2014), it would be alarmingly and embarrassingly inferior to Western government standards.

In one instance, a young man wanted by the police entered the complex to see a friend. His photo was in the computer database and facial recognition software triggered an alert to officers. [emphasis added]

To the contrary, the 2014 Hikvision case study in Security Products that the SCMP references in their story explains:

Recently a young man who was wanted by the police came onto the River Park property but fled before the police could respond. His image was captured on camera and stored in the IP video surveillance system. One week later, the in-house security team saw him re-enter the property, called the police and used the cameras to track the suspect through the lobby, into the elevator and up to a unit on the fourteenth floor.

The police who were pursuing him didn’t see him exit, so they continued down the first stairwell. Technology upheld the mission as the security team watching in the control room was able to follow every move of the fleeing suspect. They alerted the police waiting on the ground level and the second man was taken into custody as soon as he burst out into the open. [emphasis added]

What Hikvision claims here is totally reasonable and normal use of actual surveillance technology.

Prior to publishing, IPVM sent detailed feedback to the SCMP on the falsehoods and exaggerations made in the SCMP article. SCMP responded:

The story is based on a Chinese document dated last month, not the old Security Today article. It mentioned NYPD twice as a 'major project' with 'large scale application' of Hikvision technology.

To the contrary, the SCMP story, as we noted above, clearly cites Hikvision's website and Security Today. Moreover, while there is most certainly some 'Chinese document dated last month', the accuracy of it, specifically to the core claim of AI and facial recognition, is highly questionable. SCMP did not disclose the document nor any corroborating sources. We requested a copy of the 'Chinese document' but SCMP did not respond. 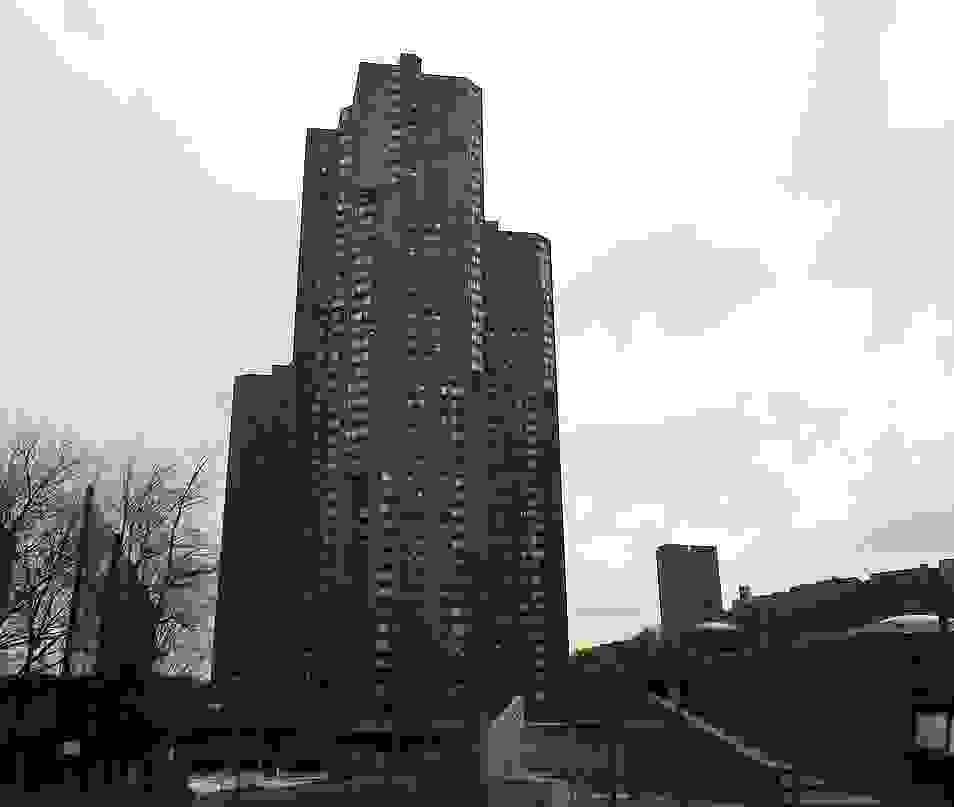 River Park Towers is a 40+-year-old Bronx housing project which, as Wikipedia describes:

Even recently, the quality of living is poor for its tenants, with elevator issues and unfair rents. Many of the inhabitants feel discomfort and their right to privacy violated as the police conduct searches without reason or without a warrant. Racism is high as the police frequently attack African-Americans

Unlike the NYPD's own cameras, NYC public housing tends to have limited funding and therefore prefer low-cost products. To that end, picking Hikvision is understandable. This is a multi-tentant residential application and Hikvision USA has offered low-cost with local sales, local support, and reasonable quality.

One dynamic that the SCMP missed is that Genetec's software is a core component of NYPD's video surveillance. This is especially notable and ironic since Genetec's 2016 expelling of Hikvision and declaring Hikvision to be a security risk has hurt Hikvision's reputation and commercial prospects in the US, especially in places like NYC where Genetec has a strong presence.

This story comes at an odd time for Hikvision since the company has acknowledged various challenges with their AI and facial recognition:

We doubt Hikvision benefits nor wanted this type of attention, even if the claims made by the SCMP had not been false. Over the past 6 months, Hikvision has kept a low public profile, preferring direct government lobbying over public displays. While large corporations regularly do pitch publications stories favorable to their interest, it would make little sense to pick a 5-year-old case study as the basis of a defense or promotion of Hikvision's USA operations.

However, to the extent this becomes an issue in the US, it could be negative for Hikvision, as Hikvision has been removed from numerous US locations, is subject to a US government ban that starts in 7 months, and risks sanctions for its profits from the Xinjiang concentration camps. One element that might mitigate fallout is that, while the SCMP is a well-read globally, it is not particularly well read inside of the US.

Whatever SCMP's intention of running this article, one theme from commenters on the article is that this shows how the US needs China and is being hypocritical to object to Chinese technology, with comments like:

The SCMP article has already fed into China nationalistic perceptions. Despite the story being false, the SCMP is so large that it will be widely believed in circles where the SCMP is well read.

What happens beyond that is unclear. For example, if the American ACLU picks this up, they might attack Hikvision for (in this case not actually) using facial recognition to persecute minorities in housing projects. Indeed, Hikvision covered up its own minority analytics software in China in 2018. Also, US mainstream publications could pick up on this and it could engender more negativity and pressure to remove Hikvision products from US installations.

However, in the greater scheme of things, this is a minor event, though underscoring issues in reporting and false, if not 'fake' news.

2019 Mid-Year Video Surveillance Guide on Jul 01, 2019
IPVM's new 400+ page Mid-Year Industry Guide brings all of these issues and...
NYPD Refutes False SCMP Hikvision Story on Jan 18, 2019
The NYPD has refuted the SCMP Hikvision story, the Voice of America has...
Comments (14) : Subscribers only. Login. or Join.