After 8 months of refusing to answer questions from a top UK official about its Xinjiang involvement, Hikvision now claims this would risk revealing "commercially sensitive information".

Hikvision did not provide any evidence about how this information is "commercially sensitive." In contrast, in the past Hikvision has openly published key details of its Xinjiang projects including price, camera counts, and more.

In this note, IPVM examines Hikvision's latest claim. Hikvision did not respond to IPVM's comment requests for this article.

Last week, Biometrics And Surveillance Camera Commissioner Fraser Sampson threatened to pull out of a national surveillance conference (where Hikvision is exhibiting) if Hikvision remains "unwilling to answer" his questions about Xinjiang.

In response, Hikvision claimed "we welcome" a conversation, but did not want to disclose "any commercially sensitive information" that would be covered by "anti-Hikvision and anti-China platforms":

This resulted in Sampson cancelling his conference appearance, calling for "honest and evidence-based debate". In October 2021, Hikvision said it would only meet in private on the issue, a condition Sampson rejected "as an independent officeholder advocating for transparency".

Sampson's questions (posed in letters from July and August 2021) ask basic questions about Hikvision's Xinjiang presence and its view of human rights abuses against Uyghurs.

For example, one of the questions is whether Hikvision accepts the "basic premise" that "crimes are being committed against the Uyghurs":

Another asks whether Hikvision has "knowledge of the use(s) of its surveillance camera systems in the internment facilities?"

And another asks whether Hikvision can "confirm the role and contribution" it plays in five Xinjiang police projects it is contracted to build and operate worth ~$300 million: 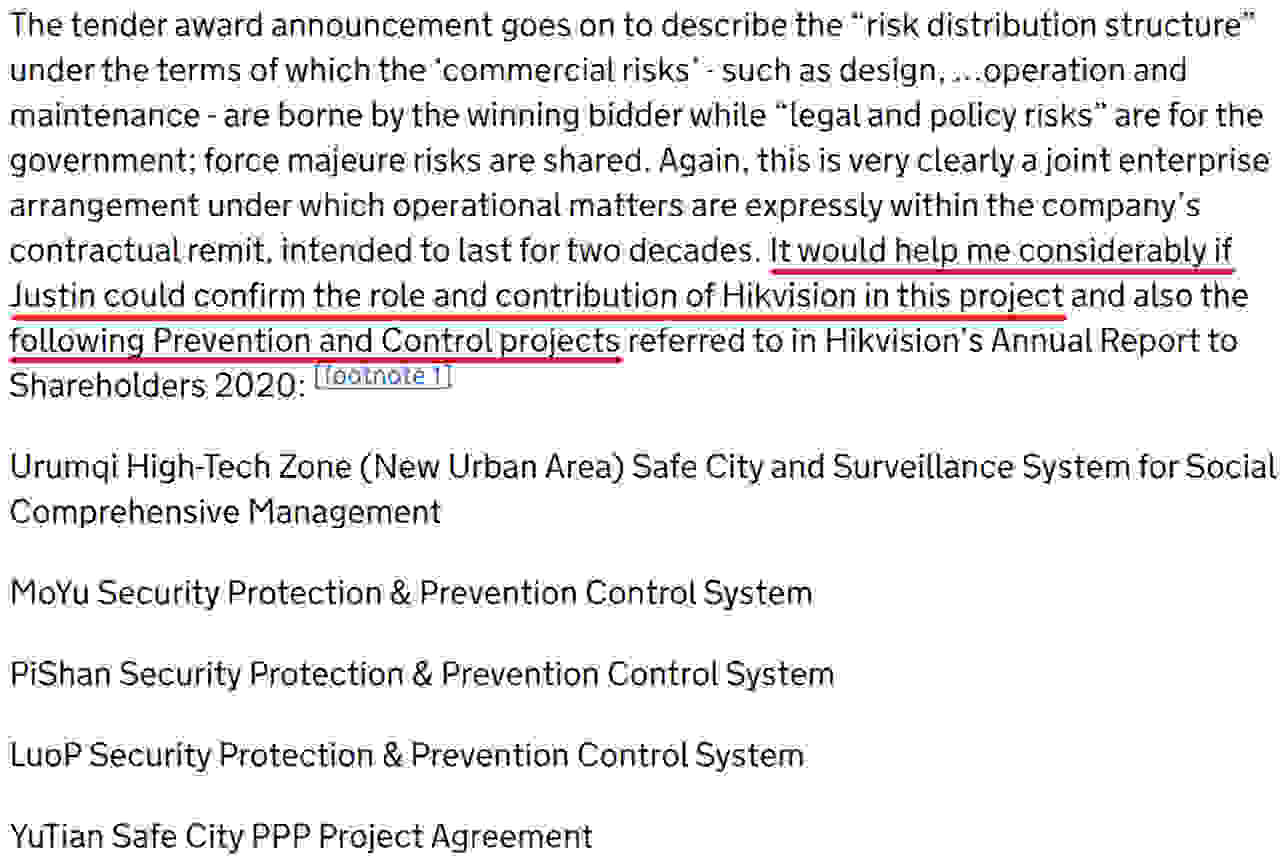 Hikvision did not respond to IPVM's request for comment about how these questions touch on "commercially sensitive" matters.

Sampson told IPVM that Hikvision is conflating commercial confidentiality - things like trade secrets which companies can legally protect from disclosure - and "sensitivity" which can apply to anything that attracts scrutiny. Sampson added that Hikvision's answers so far "say nothing but their response tells us everything": 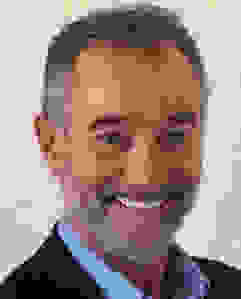 Transparency is an essential element of public accountability. As I’ve said many times, Hikvision’s answers to my questions say nothing but their response tells us everything. [emphasis added]

Sampson also noted that Hikvision "might not be free to answer" in his latest letter:

In the meantime, I have noted the content of your letter sent on the same day as you attended the IPSA event and am bound to say that I cannot see how the questions I have asked engage matters of commercial confidentiality; I do however understand that you might not be free to answer them [emphasis added]

For example, in 2017, Hikvision published a post on its website touting it had directly won a $78 million project with Urumqi police including 30,000 cameras, a "video analysis center", and other features: 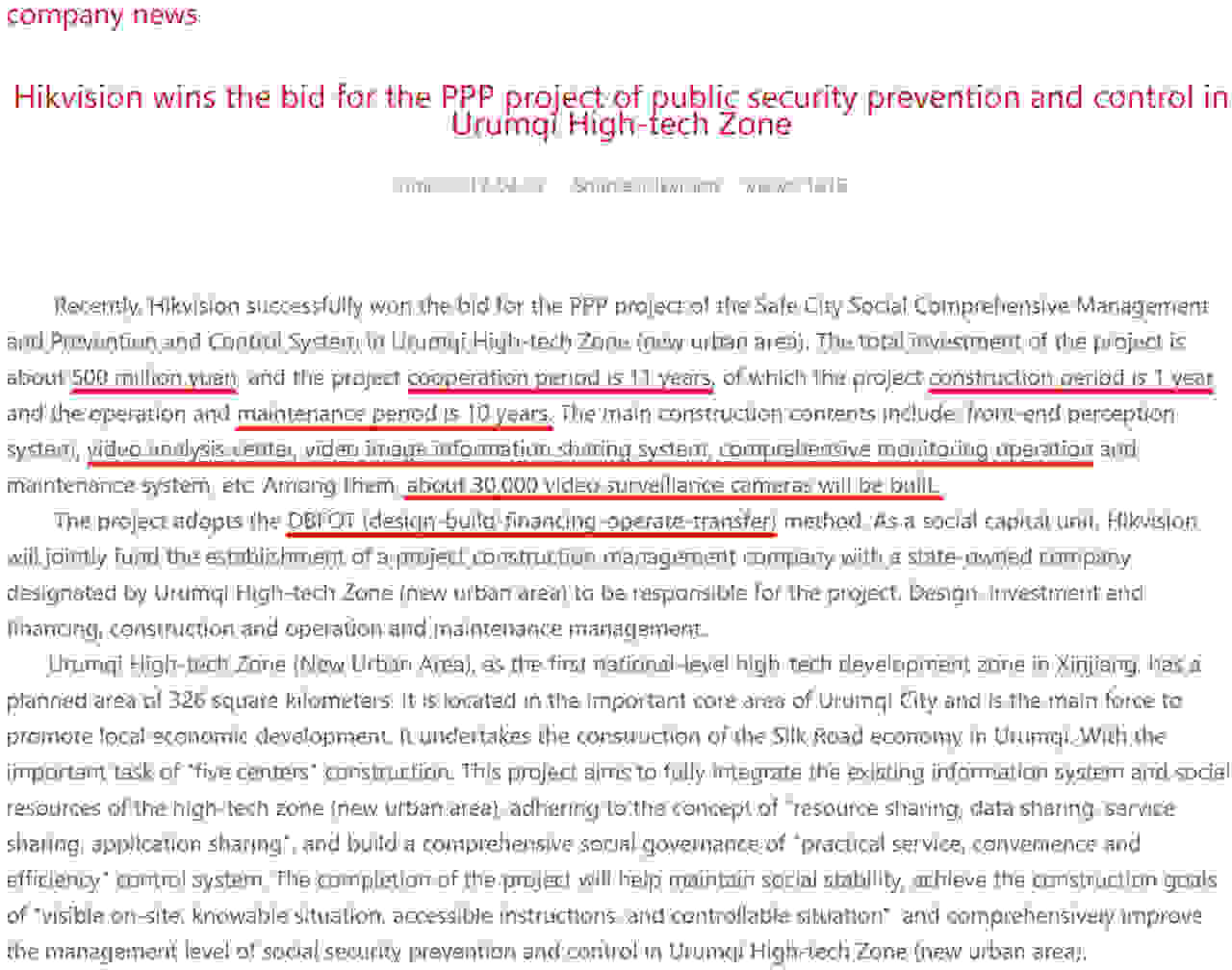 The link was up for several years but was deleted after 2019, when Hikvision got sanctioned by the US for human rights abuses in Xinjiang.

One of Sampson's questions includes whether Hikvision accepts the "basic premise" that "crimes are being committed against the Uyghurs".

Hikvision claims that such a question is "commercially sensitive", but in a company-produced video from January 2020, Hikvision made its view on Uyghur human rights abuses clear. The video showcases a Hikvision Xinjiang employee saying "the most memorable thing" was "when a customer told me: we support any business that is sanctioned by the US":

The video was deleted shortly after IPVM reported on it.

Hikvision has had over 8 months to answer Sampson's questions but keeps creating new justifications not to. In October, Hikvision told Sampson it could only discuss this topic off-the-record, and now it says these issues are "commercially sensitive".

The core problem remains the same: Hikvision's lack of any transparency on this subject. Hikvision could theoretically change this by openly answering Sampson's questions and further measures such as making public its own Xinjiang human rights investigation, which found it did not "knowingly" commit abuses.

However, such transparency would create new problems for Hikvision given how extensively involved it is in Xinjiang, meaning openness remains unlikely.

"Hikvision and Dahua Simply Cannot Be Trusted", Declares UK Camera Commissioner on Jun 16, 2022
This week, the UK's most prominent video surveillance official said Hikvision...
Hikvision UK HQ Protested By Free Tibet, Talks To Employees About "Abuse Torture Genocide" on Jun 13, 2022
Free Tibet activists informed Hikvision employees at their headquarters about...
Hikvision USA Exhibiting At GSX 2022, ASIS Silent on May 25, 2022
Although NDAA banned, sanctioned, and declared a national security threat,...
UK Camera Commissioner Calls For Ban on Government Hikvision Contracts on Apr 26, 2022
The UK's top video surveillance official is pushing for Hikvision to "not be...
"Not Welcome in the UK": Hikvision Protested At London Roadshow on Apr 13, 2022
A recent Hikvision UK event was met by activists waiving signs that read "No...

I have to ask the question, is the red guy in the picture holding up his hand to stay stop asking questions, or flipping off Sampson? I'm going with flipping off.