Hikvision's new employees recently completed a boot camp where they wore Chinese army uniforms and were trained by former army personnel, as shown in the images we obtained from the camp: 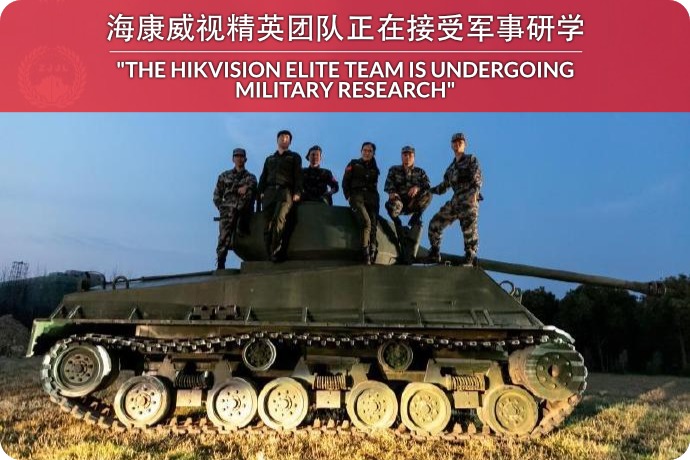 While IPVM was able to find this via the camp's social media page, Hikvision itself has not promoted the trainings, amidst concerns about Hikvision's Chinese government ownership and profits from human rights abuses.

Willy Lam, an adjunct history professor at the Chinese University of Hong Kong, told IPVM that such camps "are one of the largest growing industries in China" as the country undergoes a nationalistic/militaristic revival under president Xi Jinping.

The boot camp is called the Zhejiang Military Culture Park and was founded in April 2017, according to its website. It is registered as a private company and states that it "provides military-quality education, national defense education, and good [character] education to youthful citizens across the country." The camp is in Hikvision's home province and spans more than 1,700 acres, according to the camp.

Former Chinese army and police officials conduct the training which lasts up to a week, including the Chief Instructor and 'Ministers' listed in the image below from their own site: 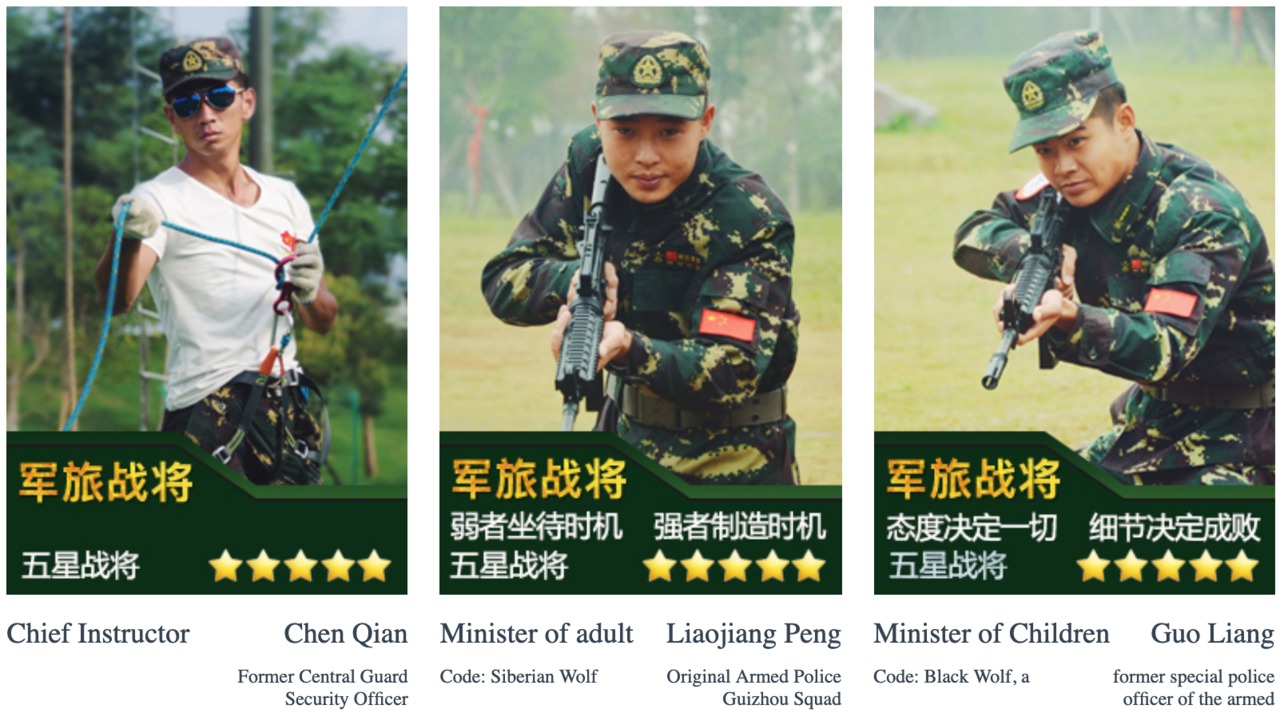 At the end of last month, the social media page for Zhejiang Military Culture Park published two posts about Hikvision employees taking part in the boot camps. The first, on March 23, included photos of youths in Chinese army uniforms and introduced them as fresh college graduates part of Hikvision's New Recruit Battalion: 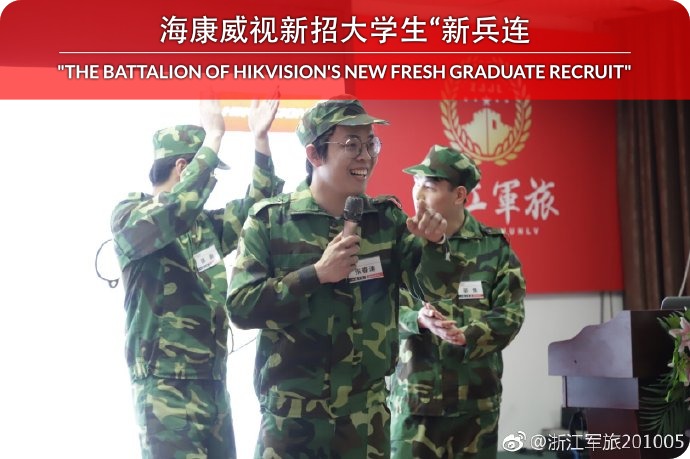 Another shows the hammer and sickle (the symbol of China's ruling Communist Party) and a banner that states "Train as if you are fighting, Fight as if you are training;": 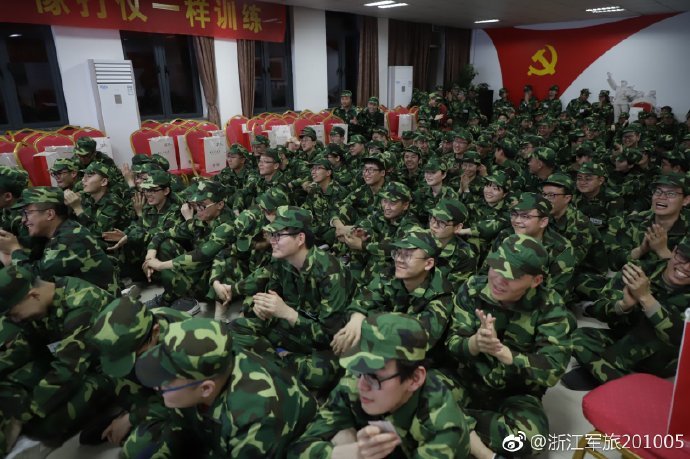 Then, on March 26, a new post was published stating that the "Hikvision team is currently undergoing military research and studies", as shown in the intro. [Update: This post has since been deleted but a screencap of the original can be viewed here.]

That post also included photos of the recruits such as: 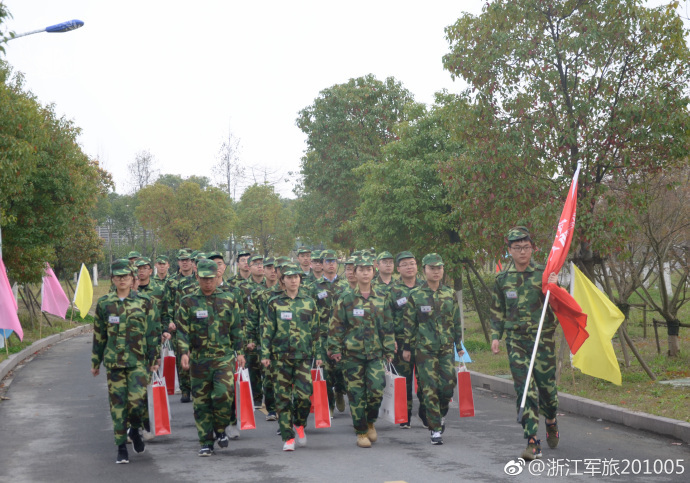 According to accounts posted on the camp's website for other companies, training typically involve activities like wall climbing, obstacle courses, and battle simulations, but also clearly ideological activities like pledging loyalty to the Communist Party. The ideological aspect is hinted at in the camp's March 23 social media post that featured Hikvision, which includes a photo attributing the camp's founding to China's top leader Xi Jinping: 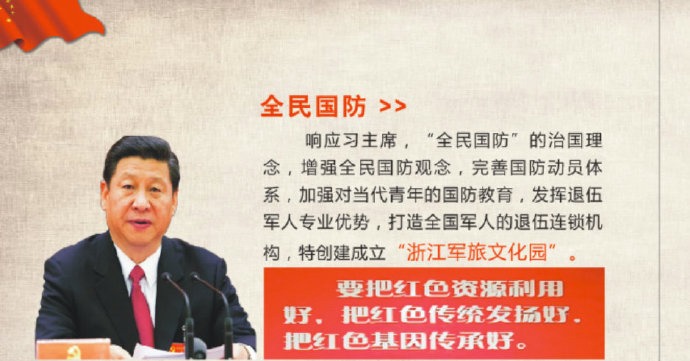 We establish Zhejiang Military Culture Park in response to President Xi's National Defense concept, to make full use of the veterans' unique advantages, and build a connected organization made up of veterans, in order to strengthen the citizens' defense concept nationwide and to strengthen national defense education among teenagers.

As one training noted, the main goal of the camp is to

enhance [employee] self-confidence, improve perseverance, enable them to surpass themselves, improve their ability to solve problems, and enhance their sense of participation and responsibility towards the collective.

In that sense, except for the overt military and political elements, it is similar to other corporate training programs.

Military training is obligatory in China for most students, typically lasting the first two weeks of the academic year in what is considered a 'rite of passage', so the military context is more familiar.

However, IPVM could find no instance of Hikvision's direct Chinese rivals such as Dahua, Uniview, Tiandy, or ZKTeco using such military camps for employee training.

The Zhejiang Military Culture Camp itself provides military-style training to a wide array of schools and private companies in China, everything from a local pharma firm to China's Herbalife branch to a primary school.

One company that has conducted military training is Huawei. This is considered part of Huawei's "Wolf Culture", which emphasizes extremely aggressive expansion tactics. The 2013 Chinese book "The Huawei Story" notes:

The military training is aiming at changing the spiritual outlook of new employees and shaping their bodies.

Huawei is well-known for having a founder, Ren Zhengfei, who is a former PLA engineer; Zhengfei often uses military analogies to motivate his employees, for example recently comparing Huawei's consumer electronics division to the Communist Party's wartime struggles in the 1930s. Huawei's deputy chairman Eric Xu outright stated in an internal memo:

Professor Willy Lam told IPVM via email that the practice of military-style bootcamps for companies is becoming more popular in China as a way to showcase loyalty to the state:

Big firms (even private ones – and both tech and non-tech firms) send recruits to boot camps probably to ensure their loyalty to a) their employers; b) the Party, which ultimately controls all big companies in China.

Wo-Lap added that military-style boot camps are part of an ideological revival in China:

All these tie in with Mao’s concept of “people warfare.” Ordinary citizens become soldiers in times of war. This used to be Cold War doctrine. But this has been revived by XJP [Xi Jinping] to beef up what already is the world’s most formidable police state apparatus.

How popular this military training is for Hikvision employees is unclear to us. We did search for Hikvision comments and found two users on Chinese internet forums sharing experiences.

One Hikvision employee stated in an online thread about why people left Hikvision that the boot camp was a bad experience, with whole teams punished for one person's mistake and an almost cult-like atmosphere:

Every day, I recited corporate values, shouted slogans, and people who didn't know [about it] thought it was a pyramid scheme.

In another forum post, a user called the military training "bullshit," "torture", and "brainwashing", noting:

What this company needs is an employee who is determined to execute orders without independent personality and autonomy.

IPVM initially did not receive a response to our request for comment about this training from Hikvision. Later, Hikvision officially declined to comment.

While companies like Huawei and Hikvision emphasize being private companies in their Western marketing, this training, with explicit military and Communist Party themes, runs counter to that. The concern among many in the West is the control and influence of the Chinese Communist Party, which this training further underscores.

Hikvision Global News Reports Directory on May 13, 2022
Hikvision has received the most global news reporting of any video...
2019 Mid-Year Video Surveillance Guide on Jul 01, 2019
IPVM's new 400+ page Mid-Year Industry Guide brings all of these issues and...
ISC West 2019 Report on Apr 12, 2019
The IPVM team has finished at the Sands looking at what companies are...

Clearly they are preparing for your visit to their ISC West booth next week. 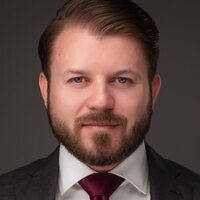 That's one way to do a team building workshop. Most companies I know just go to Top Golf🤣

Didn’t PelcoU have a similar program in the U.S.?

Hikvision defenders need to accept reality. An organization that conducts new hire orientation in PLA soldier uniforms while pledging loyalty to Xi Jinping is an organization that follows the rule of the authoritarian China Communist Party, including the risks it places for foreign countries, especially democracies.

None of this should be a surprise given Hikvision's Chairman is a Communist Party Secretary and member of the Chinese government but this training shows that this extends from the very top to the very newest, youngest recruit.

Professor Willy Lam Wo-Lap told IPVM via email that the practice of military-style bootcamps for companies is becoming more popular in China as a way to showcase loyalty to the state:

Big firms (even private ones – and both tech and non-tech firms) send recruits to boot camps probably to ensure their loyalty to a) their employers; b) the Party, which ultimately controls all big companies in China.

Emboldened, italicized and underlined what everyone should be aware of by now.  This quote was made not by an outsider or foreigner, but reportedly by:

Face it, there are NO "private" companies in China, they can all be controlled in a heartbeat to do what they're told, install whatever backdoor, collect whatever data they want, etc etc.  Luckily my tinfoil fedora protects me ;)

Come on. Please don't be so political and purposely mis-lead team building activity. They are wearing camouflage uniform rather than official PLA uniform.

I'm sure a spirited game of genocidal paint-ball provided hours of  entertainment!

Do this mental exercise. Imagine Google's new hire orientation has their staff dress in camouflage, stand on tanks, sit behind Republican signage and a dedication to Trump. Then imagine what outrage would follow.

But with Hikvision this is simply team building, correct?

If Hikvision wants to persuade people it is just a private, commercial business, then perhaps this is not the best training? Fair?

I guess one of the main objections is them pledging their loyalty?  My kids say the Pledge of Allegiance every morning in school, sure it is not to a person but it is a similar activity.  Do all kids at schools in the US mean what they say each morning?  Probably not.  Do all Hik employees mean what they said?  I doubt it.  I'm not saying I agree with them pledging their loyalty to Xi Jinping but there might be some cultural misunderstandings here.

As far as military style team building, I don't see any issue with it...it turns out BMW, Unilever, Microsoft, SAP, Honeywell, De Walt, Coca Cola, FedEx, BP, Kenworth, Deloitte, GlaxoSmithKline, E Trade, TYCO, and many others have done a similar team building exercise with this company based out of Australia, but also operating in other counties...including the USA.

They're not the only ones, this company in the UK does military style team building events and boasts Lego as one of their clients.  Can you imagine?  I wonder if they pledge their loyalty to a Teresa May Lego mini-figure.

A few responses do your points:

Here the Hik Army is drilling with Macy’s bags, part of their retail invasion training: 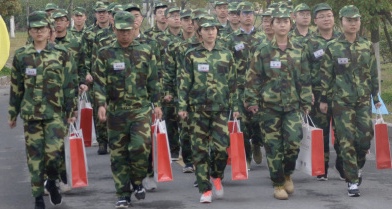 Hik will win the price war...

Update: two corrections - I initially described the army/police instructors as "retired", however we've changed it to "former" is this is a more accurate description. Also, the "this is wartime" quote was originally attributed to Huawei founder Ren Zhengfei, but was actually said by Huawei deputy chairman Eric Xu.

It will be part of their new camera kit :)

Looks like a militarized version of what US companies do when they require executives to read "The Art of War"?

Wow! This should make selling against Hikvision very easy. Does anyone know why they chose "The People's Republic of China" instead of the "Facist/Communist State of China" ? We all know that if we bend the spectrum into a circle that Fascism and Communism are 1 degree apart from each other. Ethnic cleansing of Muslim's doesn't help.

Honestly... why is Hikvision even allowed to operate in America anymore? We wouldn't let the KGB sell us spy cameras why are we letting them?

Update: The March 26th post, featuring Hikvision employees on a tank, is now returning a 404 / not found. Our screencap for posterity: 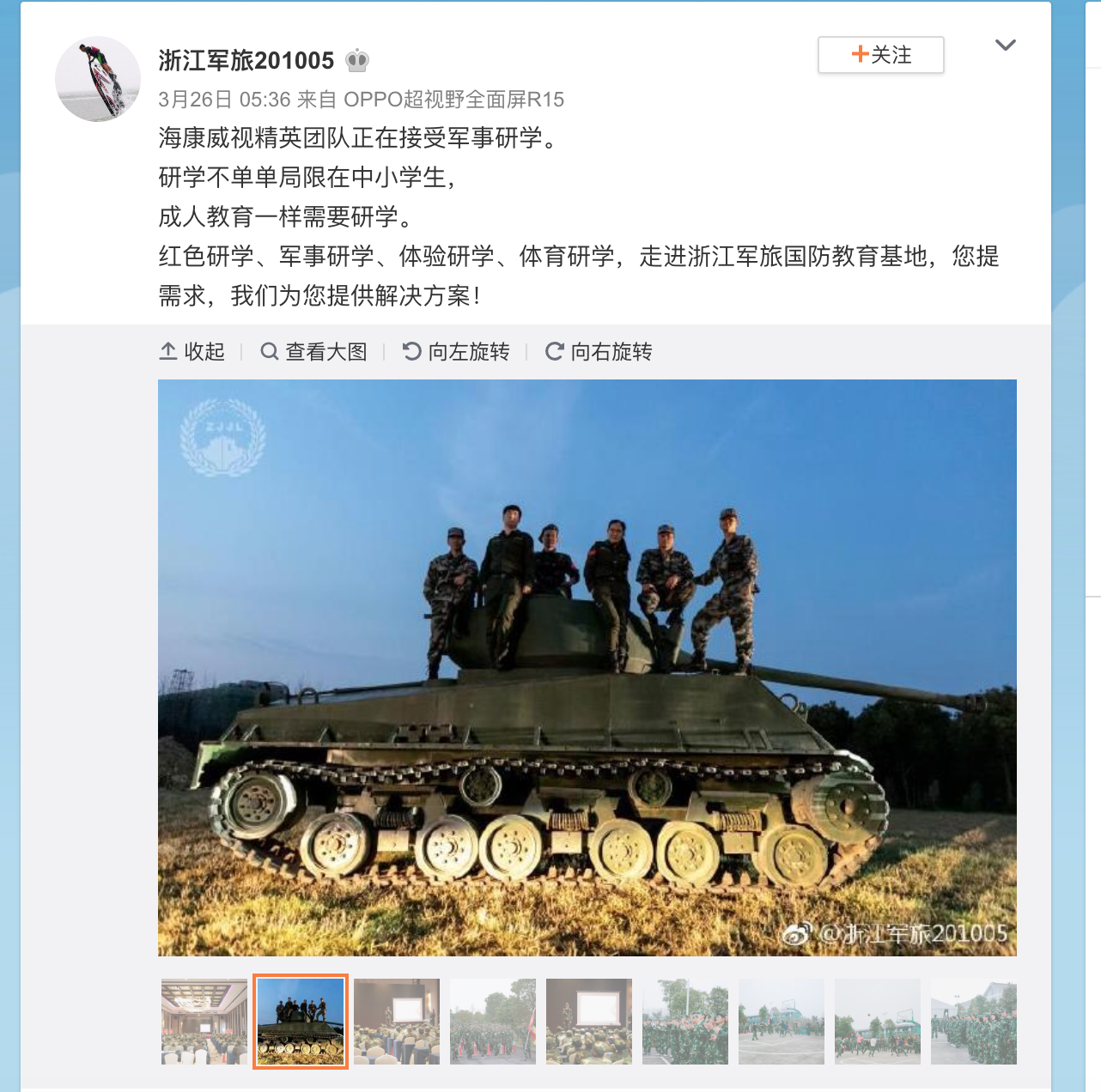 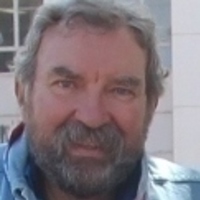