Hikvision will not stop until they dominate the entire market.

Turning on their manufacturer OEMs by OEMing to ADI and Tri-Ed earlier this year, Hikvision now turns on their integrator partners.

Inside this note, we examine their direct end user sales program, their new 'self-OEMing', how they are trying to hide it, and what it means to the industry.

Hikvision has launched a new company this July, named Ezviz, as shown by California state records: 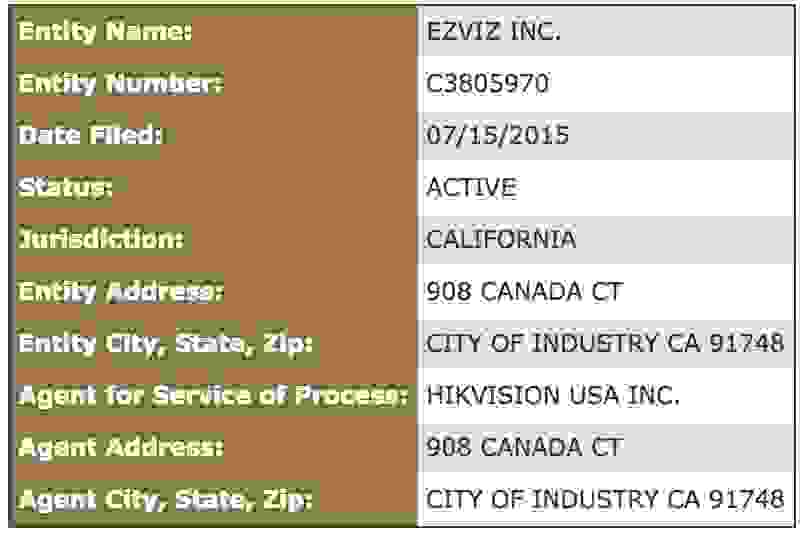 Ezviz is selling individual IP cameras as well as 4, 8, and 16 channel kits. They are already being sold at Sam's Club, Newegg and, as the image below shows, at Amazon:

Hikvision / Ezviz is targeting everything from consumers to 'enterprise security [link no longer available]' with the new offering, including, as they describe it, chain stores and factories:

The most attractive option immediately will be the Dropcam alternative, that is being sold on Amazon for $69.99 + one year of free 7 day storage (which is radically less than Dropcam and every other cloud cam offering).

What Ezviz Used to Be

If you follow Hikvision, you may recall Ezviz meaning something else previously. Indeed, up until the last few months, Ezviz was Hikision's brand / name for their own cloud access service, as this 2014 video clearly shows:

However, Hikvision has now shifted Ezviz to something different.

Generally, Hikvision is quick to tout their market position and successes, but with the new 'company' they have buried their name and association. Ezviz is portrayed as a completely separate, independent company. Earlier in 2015, the Ezviz website prominently displayed Hikvision's company info at the bottom of every page and on the terms of service. However, now, Hikvision has removed those references.

There is no Hikvision references or admission in Ezviz's company announcement, which proclaims:

Obviously, Ezviz manufactures nothing, outside of cover for Hikvision. They are, essentially, OEMing themselves.

However, Ezviz's managing director cited in the announcement is a Hikvision North American sales employee (Albert Lin [link no longer available]) who was transferred over.

And on the products themselves, Hikvision hides its ownership:

However, looking up the FCC ID on the Ezviz camera (2ADTD-CSC) shows that the product is registered to Hikvision, not Ezviz.

In China, No Hiding

By contrast, in China, Ezviz is clearly marketed as a Hikvision brand, not an independent company. There, they sell many different types of cameras and alarm systems as well [link no longer available].

There are 3 main benefits for Hikvision from hiding their involvement:

The direct sales end user market is already quite big and growing. For example, Swann, one of the specialists in this segment, does over $100 million annual revenue. Amazon certainly sells hundreds of millions of dollars of video surveillance systems. It would not surprise us if Amazon sells more video surveillance than ADI. And as Hikvision continues to drive down unit pricing, it becomes even more attractive for consumers and businesses to simply buy $69 cameras or ~$300 kits direct from Hikvision.

There has been short term elation that Hikvision has helped early adopter dealers make money over the past year or two, benefiting from much lower prices. However, this move shows that Hikvision is determined and organized to saturate the market and maximize their total unit sales as quickly as possible.

How Hikvision makes profits with their approach (e.g., now selling cloud IP cameras direct, with phone support and free one year storage for $69.99) is a mystery to us. But these moves, if continued, will hurt integrators and crush many of their manufacturer competitors as ubiquitous cheap video surveillance systems become the norm.