Low light has been one of panoramic cameras' biggest challenges, with most essentially useless in low light, becoming a key barrier for panoramic adoption.

For instance, here's one comparison from our original panoramic shootout:

As can be seen, performance ranged from really bad to terrible. 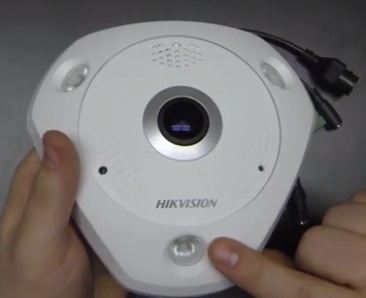 Hikvision claims to change this with two new panoramics that have built-in IR illuminators. We bought both the 3MP (DS-2CD6332FWD-I [link no longer available]) and 6MP DS-2CD6362F-I) versions, and tested them against leading panoramic cameras from Axis, Brickcom, Samsung, and Vivotek to see how they compared in low light, WDR and even light scenes.

No direct VMS integrations are complete though the cameras are new. Hikvision informs us Exacq, Milestone, Genetec, and others are in process but not yet fully supported.

In our tests, ONVIF integration worked properly in Video Insight, with both streaming and VMS controls supported. Streaming functioned in Milestone, though PTZ controls were not supported. In Exacq, only the warped overview stream could be displayed, but none of the secondary dewarped streams.

RTSP streaming for each individual stream worked properly in all VMSs which support it, though this removes PTZ controls, requiring PTZ views to be set via the web interface.

Estimated street pricing of these two cameras, based on dealer pricing plus markup, is as follows:

Pricing of both of these cameras is lower than average compared to most other panoramic cameras available, such as Axis, Vivotek, Brickcom, etc., which average $550-600, though higher than the Samsung SNF-7010V (~$360 online). Additionally, none of these other models include IR illuminators.

Both the DS-2CD6332FWD-I and DS-2D-6362F-I offer better low light performance than any other panoramic camera we have tested and are recommended if low light is a key concern.

The 6MP 6362 is especially recommended over the 3MP version, producing more details at longer ranges than other cameras, both of our subject and chart, making it a good choice even if low light is not a concern, priced at or below competitive models.

In this video we review the physical features of the Hikvision panoramic cameras, most notably the large IR LEDs on the face of the camera.

In this video we review configuration of these cameras. Note the following:

In our tests, we found dewarping on the DS-2CD6332FWD-I distorted compared to the 6MP 6362, with subjects stretched horizontally, appearing wide and squat. The image below compares the subject at the same range and zoom level in the 6332 vs. the 6362. In the 6362 there is little to no distortion, with the chart appearing square and our subject proper proportioned.

This video reviews IR range and performance in indoor and outdoor ceiling and wall mount configurations. Note the following:

We compared the 6332 and 6362 to leading panoramic models from our past tests in multiple scenes:

In full light, at close range (~6'), both Hikvision models provide clear images of our subject and test chart, as do other cameras tested. 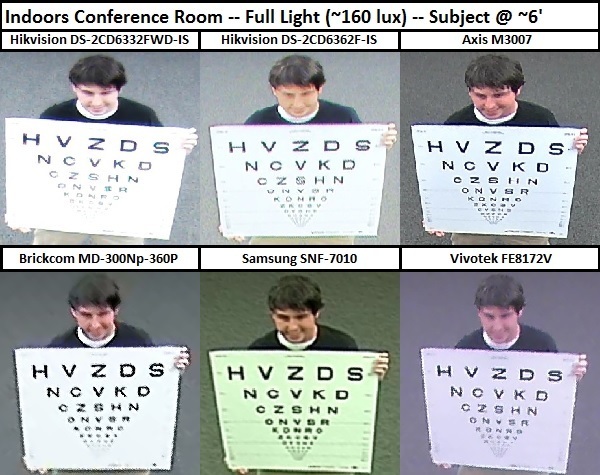 Moving to 12', the 6 megapixel 6362 provides more details than other cameras in the test, while the 6332 begins to drop off. Note the dewarping of the 6332 at this range stretches the subject horizontally, making him look squatter than in other cameras. 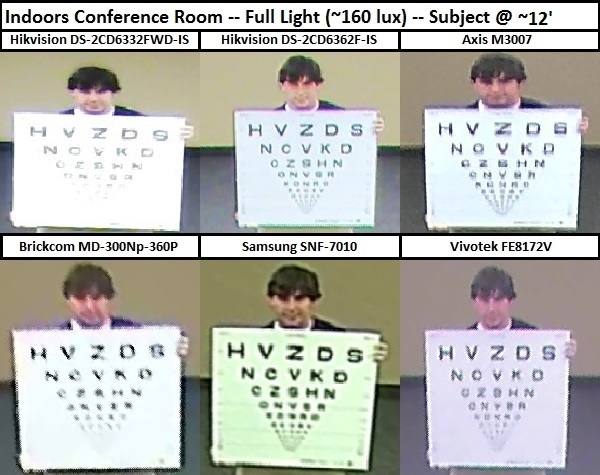 Finally, at 18', details remain strongest in the 6362, with more lines of teh chart legible than in other cameras. The distorted dewarping of the 6332 is most evident at this range, as well. 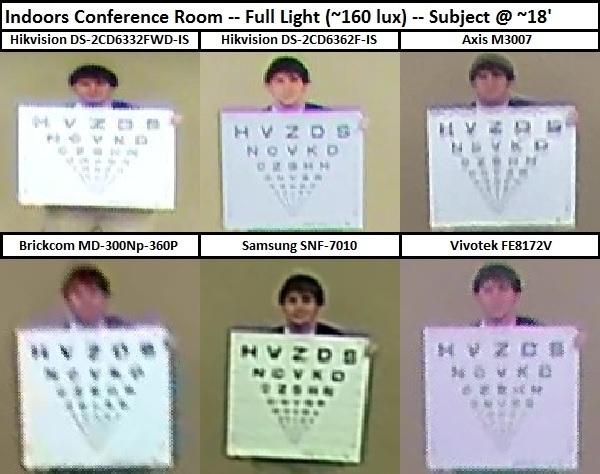 In low light, with all lights off, below 1 lux, both Hikvision cameras drastically outperform other cameras in the test, with the 6332 providing details of the subject and 2-3 legible lines of the test chart. The 6362 clearly shows the subject, but details are obscured by IR overexposure. 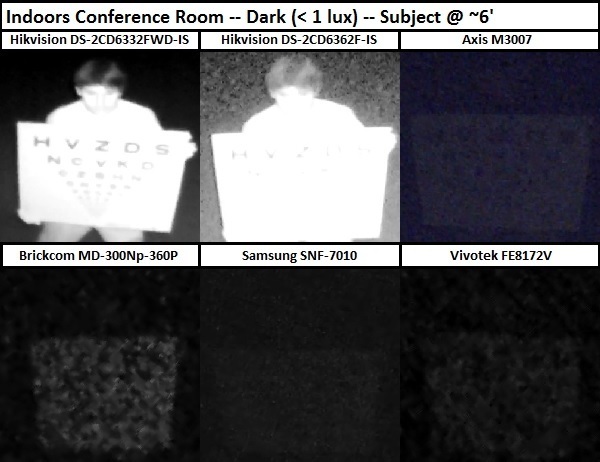 At 12', no recognizable details are shown in either Hikvision IR model, though the subject and chart are clearly visible, while other cameras provide no usable images. 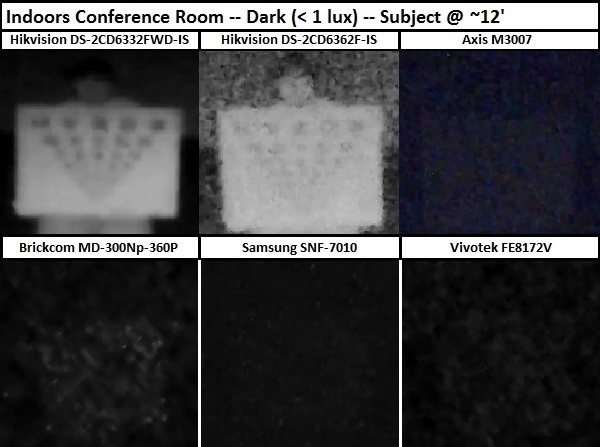 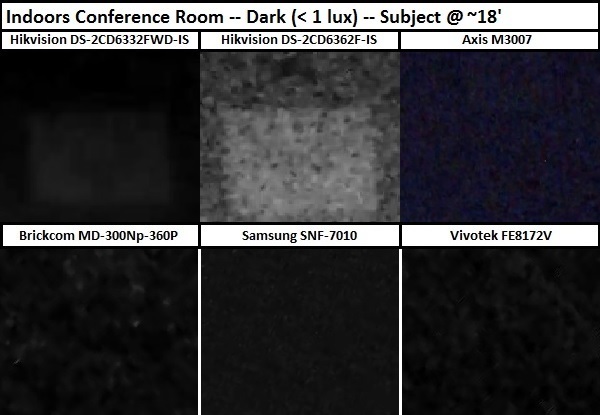 We tested WDR capabilities of the cameras in a warehouse overhead door scene, seen here: 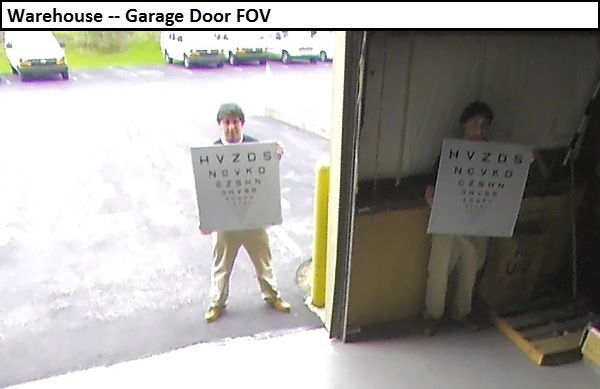 Both Hikvision models are among the best tested in this scene, with the 6362 providing more details due to its higher resolution, though moderate WDR capability. The 6332's WDR is strongest, though the decrease in resolution at range (~12' here) reduces legibility and subject details. 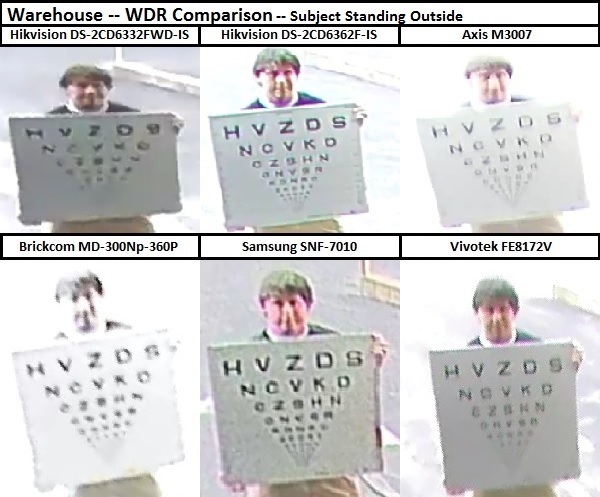 Both are again strong in the dark area next to the door. 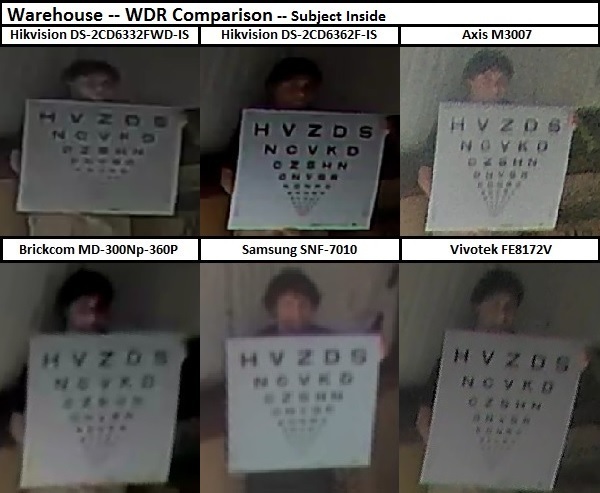 All cameras were tested using default settings aside from exposure, which was standardized at a maximum of 1/30s. The following firmware versions were used:

Hikvision 12MP IR 360 Camera Tested 2016 on Jul 28, 2016
Hikvision has released their latest IR panoramic camera, the DS-2CD63C2F-IV,...
Panoramic Cameras Wall vs Ceiling Mount on Jul 12, 2016
Panoramic cameras are almost always ceiling mounted, looking down for a...
New Cisco Video Surveillance - Still Going Nowhere on Jul 14, 2015
'Everyone' knew Cisco would dominate video surveillance back in 2008. They...
Warehouse Camera Selection Guide on May 20, 2015
Warehouses can contain many high-value items yet often do not have people...
4K Panoramic Panasonic Tested on Mar 25, 2015
Panasonic has released their first 4K cameras, and surprisingly, they are...
Testing Scallop Panoramic Cameras on Dec 19, 2014
For years, Arecont Vision's SurroundVideo line has been practically the only...
Smart IR Panoramic Camera Tested on Oct 10, 2014
Panoramic cameras are overwhelmingly quite bad in low light. Now,...
Panoramic Camera Usage Rising 2014 on Jun 17, 2014
Panoramic cameras have been around for more than a decade but only in the...
Hikvision 2013 IP Cameras Tested on Dec 02, 2013
Hikvision claims to be the #1 surveillance manufacturer in the world. That's,...
Comments (28) : Subscribers only. Login. or Join.