With super low cost and full HD video, Analog HD has the most potential to disrupt the surveillance market of any new technology in years.

With 1080p HD IR cameras, routinely being priced at ~$100, and with 16 channel recorders at ~$500, the cost is dramatically lower than even very low cost HD IP offerings.

The two biggest names behind Analog HD are Dahua and Hikvision, the mulit-billion Chinese manufacturers.

IPVM has prepared an in-depth comparison between the two offerings, based on our unique testing.

The six key elements we contrast:

Dahua has an advantage in product portfolio, pricing and cabling performance.

The two offerings were similiar or close in overall image quality and recorder capabilities.

Hikvision has a major advantage in sales and support in North America.

Both technologies have been shipping for a very short time, Dahua for ~1 year, Hikvision only for a few months. There will be absolutely be changes and possibly shifts in competitive positioning.

Beyond that, it is reasonable to expect more products to be released and likely more higher end ones, as both companies have started with entry level / basic featured products.

There are three basic options:

Given that it is early and that both have limited higher end feature sets, we recommend and expect many mid to high systems to simply ignore both options, especially for now.

However, for those looking for more basic systems or where low price is key, we think both are quite attractive.

The challenge is that while Dahua's technical performance is superior, Hikvision's sales and support (in North America) is superior. Buyers will have to determine which one is more important for their needs.

We strongly recommend professional applications integrating HDCVI or HDTVI with VMS software, turning analog HD into an extremely inexpensive camera / encoder kit while getting the benefits of a mature VMS. See our HD Analog DVRs With VMS Software Test report for more.

Both Dahua and Hikvision have released all the common form factors in their HDCVI and HDTVI lines (box, full size and compact bullets, full size and mini domes). Integrated IR is available in multiple ranges and both bullet and dome form factor.

Dahua also includes advanced features in more camera models than Hikvision. Though this is not to say higher end camera features such as true WDR and motorized zoom are common, as they are not, unlike IP cameras.

Dahua has a slight price advantage over Hikvision in both cameras and most DVRs.

This amounts to about a 25% pricing advantage for Dahua.

Again, a price advantage for Dahua. However, note that all of Hikvision's Turbo HD recorders support analog cameras on BNC inputs and 1-2 IP cameras each, while the HCVR5104C supports only HDCVI cameras.

However, Hikvision has an advantage in hybrid recorder pricing, as all of their Turbo HD DVRs also support analog and limited numbers of IP cameras. Users who wish to connect analog or IP cameras to an HDCVI system must use Dahua's more expensive Tribrid DVR models, a 2-3x increase in price.

Dahua's HDCVI performed better than HDTVI when using low quality, poorly terminated, or very long cables. In our tests, HDCVI had little to no image degradation when run over 1,000' spool of poorly terminated RG-59U (literally with connectors falling off). This is shown in the video below:

Hikvision HDTVI did not perform as well, exhibiting smearing and desaturation when tested on the same spool of cable, seen here:

At shorter distances, ~500' and below, both performed similarly to coax, with only slight issues (light desaturation and smearing). However, using long runs (500'+), HDCVI outperformed HDTVI.

Using a ~1,000' spool of Cat 5e with Muxlab 500022 baluns (a common model), the HDCVI camera exhibited moderate smearing, seen at the edges of the test chart here: 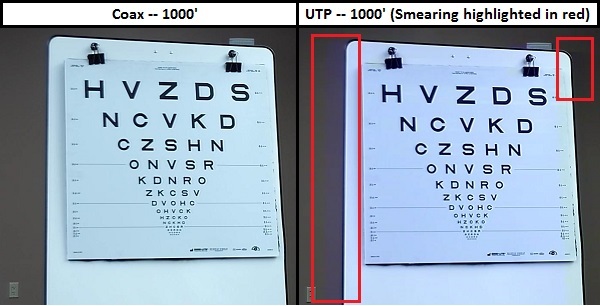 However, HDTVI became nearly completely desaturated at this length using the same cable and baluns.

Both HDTVI and HDCVI produced image quality similar to HD IP cameras, with neither truly standing out as superior to the other, and highly dependent on camera model. Readers should see our test of Hikvision's HDTVI cameras and Dahua HDCVI Gen II for full details.

The image comparisons shown here are for a rough overview only.

The image below shows Hikvision's HDTVI cameras compared to HD IP models of their own as well as competitors. HDTVI and HD IP delivered similar details in these comparisons.

Next this, comparison show's Dahua's Gen II HDCVI models versus first generation and HD IP. White balance was tinted bluish, but details were similar to other cameras. 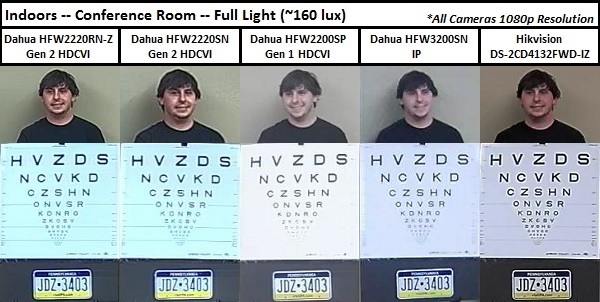 Low Light with IR On

Dahua's Gen 2 HDCVI cameras were both notably noisier than their Gen 1 and IP equivalents, but details delivered were similar. 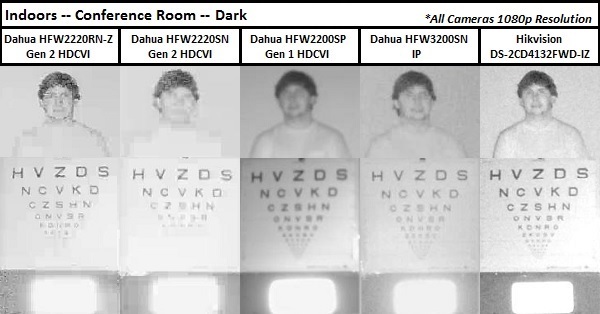 For the most part, usability of Hikvision HDTVI and Dahua HDCVI DVRs is similar, with both accessible via the local interface, web, or client software.

Dahua has two key advantages in the local interface, which is key as this is how many small system DVRs are used.

All Hikvision Turbo HD models support analog cameras on all inputs, as well as a limited number of IP channels (1 on 4-channel DVRs, 2 on 8/16 channel models). However, these models are limited to Hikvision IP cameras only, with no third party support.

Dahua users must select their more expensive tribrid models if analog camera support or IP channels are needed. However, unlike Hikvision, all tribrid DVR channels may be HDCVI, analog, or IP, instead of being restricted to 1-2 channels per recorder. Also unlike Hikvision, third party cameras are supported via ONVIF and direct drivers.

Sales and support will vary depending on the region one operates as both companies have differing go to market approaches throughout the world.

For North America, the approaches of Dahua and Hikvision are completely different.

Dahua has virtually no North American presence and does not officially sell or support Dahua products in North America. One can buy them on the Internet, from China, etc. but warranty, support, etc. are questionable.

Dahua typically depends on OEMs / partners, which it has numerous. The problem is that many hide their affiliation and most only sell a subset of Dahua's products. The biggest brand partner of Dahua in North America is FLIR who is actively acknowledigng HDCVI in their recent MPX release.

Footnote: What About AHD?

Though a third HD over coax option is available, AHD, it is much riskier than HDCVI and HDTVI, for 3 key reasons:

AHD's biggest advantage is that its pricing is even less than HDCVI and HDTVI. So if you really want to cust costs as much as possible, and are willing to take the risk, AHD is an option.

SD Analog is Finally Dead on Oct 19, 2015
Good news. For years, industry people have hoped for the demise of NTSC and...
Dahua Finally Has A US Distributor on Oct 08, 2015
Finally. Billion dollar Dahua is the 'smaller' of the two mega Chinese...
$100 True WDR Camera Tested (FLIR CVI) on Jul 31, 2015
True WDR has traditionally been quite expensive. And HD analog has so far...
Samsung Goes AHD, Sets Battle with Dahua and Hikvision on Jul 20, 2015
HD analog continues to grow. One of the biggest problems so far is the lack...
HD Analog Usage and Rejection Statistics 2015 on May 11, 2015
Non-IP HD cameras are one of the most notable new trends in video...
Testing Honeywell HQA HD-CVI on Apr 22, 2015
HD analog support continues to expand, with Honeywell now releasing its own...
Honeywell Launches HD-CVI on Apr 01, 2015
Honeywell becomes the biggest western surveillance manufacturer to release HD...
Testing Dahua Cameras 2013 on Jul 08, 2013
You may not know Dahua, but you should. They are the 'other' big Chinese...
Comments (1) : Subscribers only. Login. or Join.