HD Analog is the most interesting new trend in the industry now, claiming HD quality over legacy coax, with simpler configuration and lower prices than IP.

IPVM has tested two of the entrants already, Dahua HDCVI and Nextchip's AHD

Now, in this report, we test HDTVI. HDTVI is a technology from Techpoint but is most associated with mega manufacturer Hikvision.

We tested these cameras against similar form factor and resolution IP cameras to answer the following questions:

HDTVI cameras in this test are priced as follows:

Hikvision's TVI pricing is lower than these cameras' IP counterparts. For example, the 1080p TVI bullet tested here selles for about $100 less than its IP counterpart:

HDTVI's key benefits are the same as HDCVI: similar quality and simpler setup than IP camera systems at lower price points. For existing analog installations looking to upgrade from to HD video, both are attractive options.

However, due to HDTVI's greater sensitivity to cable quality and type, users with long cable runs of aging cables or UTP should test cameras in place to ensure image quality is acceptable.

Finally, Hikvision's backing of HDTVI provides certain advantages HDCVI does not have:

Hikvision's HDTVI cameras are very similar in construction to their IP models, with the main obvious difference being connector type. Housing, LED quantity and layout, and other factors are similar.

HDTVI performance was degraded when using low quality cable compared to the factory terminated RG59U used for most of our test. Video took noticeably longer to begin streaming. Once connected, images were moderately less saturated, with substantial smearing effects throughout the FOV.

The image below shows a direct comparison of these two cables. Notice the smearing, blur, and desaturation present in the low quality cable image.

Degradation using Cat5e was much worse, with the image completely desaturated and blurred when using a ~1,000' length with baluns.

We tested the TVI cameras against IP and analog models to compare image quality in our interior conference room test scene. 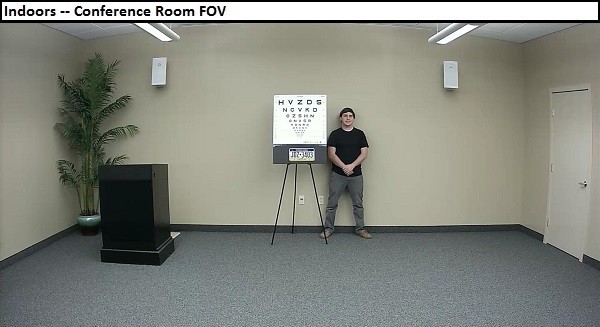 The TVI and IP cameras performed similarly in this ~160 lux scene, with both 1080p and 720p cameras providing usable details of our subject and multiple lines of the test chart. The Sunivision 720p TVI camera is notably duller looking than the other 720p cameras tested, with the subject's skin tone appearing more reddish, and the chart taking on a bluish tint. The 900TVL analog camera unsurprisingly performs worst, with only line one of the chart reliably legible, and subject details reduced.

In low light, details of TVI and IP cameras are again similar, and analog far worse. The Sunivision 720p TVI camera is again lower quality, in this case due to reduced IR illumination power, apparent in the image below.

Compared to similar IP cameras, the Hikvision TVI cameras' bitrates were about 40-50% lower in full light, and 60-75% lower at ~0.1lx with IR on. These measurements were taken at 10 FPS with quantization standardized to ~28.

The image below shows quantization of the DS-2CE16D5T-IT3 TVI bullet and DS-2CD2232-I5 IP bullet measured in AVInAptic. Note that both display the same resolution and quantization.

[NOTE: Though we tested this repeatedly and believe the tests were normalized, we do not have a theory of why bandwidth was so much lower and will continue to investigate this.]

This chart shows overall bandwidth measurements for all cameras. Note that the Sunivision AP-14SGH-TV was lowest overall, but also notably darker, with poor low light performance.

Up the Coax Camera Control

Up the coax camera control from remote configuration / optimization is possible with TVI but was available on just one of the three models tested - the Hikvision 1080p. As such, verify support on TVI cameras you consider.

Here is an overview of how up the coax control worked:

SD Analog is Finally Dead on Oct 19, 2015
Good news. For years, industry people have hoped for the demise of NTSC and...
$100 True WDR Camera Tested (FLIR CVI) on Jul 31, 2015
True WDR has traditionally been quite expensive. And HD analog has so far...
Ranking The Lowest Cost Outdoor Cameras 2015 on May 14, 2015
Outdoor cameras can be expensive. In our last study of this segment, the...
HD Analog Usage and Rejection Statistics 2015 on May 11, 2015
Non-IP HD cameras are one of the most notable new trends in video...
Axis vs Hikvision vs Sony Encoder Test on Mar 18, 2015
In this report, we share test findings of three popular four port analog SD...
Hikvision HDTVI Long Distance Problem Tested on Feb 05, 2015
Hikvision's HDTVI cameras performed poorly over low quality or long coax and...
Hikvision HDTVI VS Dahua HDCVI on Dec 10, 2014
With super low cost and full HD video, Analog HD has the most potential to...
Major Moves - Security Manufacturers 2014 / 2015 on Dec 08, 2014
This guide summarizes the biggest moves of security manufacturers in 2014 and...
Top Manufacturers Gaining and Losing Ground 2014 on Oct 27, 2014
IPVM survey results of 100 integrators show what manufacturers are gaining...
Why Consumer Surveillance Will Flip to IP on Nov 19, 2012
The last still strongly analog segment is the consumer market. Cost is king...
Comments (26) : Subscribers only. Login. or Join.