Hikvision's HDTVI cameras performed poorly over low quality or long coax and UTP cables in our original tests. This was a major issue as a key selling point of analog HD technologies is reuse of existing cables.

Now, a few months later, they have released updated chipsets and camera firmware claiming to better support these cables. We tested cameras including these additions head to head with previous models to see if performance has improved.

Using high quality cables, 25' with factory terminated connectors, the difference between new and old generations is slight. The new generation camera and DVR shows slightly better saturation and contrast, but overall are not drastically different. 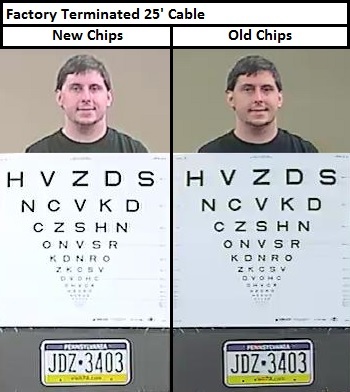 In this second test, we used a 1,000' spool of RG59U with field terminated BNC connectors. The difference between old and new chips/firmware in this case is striking, with the performance of the new models over this long cable very similar to what was seen using the 25' RG59U. The camera using the original firmware, however, shows substantial smearing, especially noticeable in the test chart, as well as moderate desaturation. 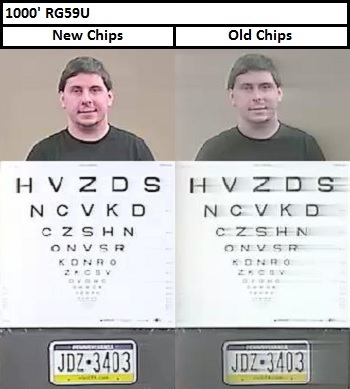 Finally, we tested over 1,000' spool of Cat5e using Hikvision's DS-1H18 passive baluns (~$13 USD online). The difference is again significant, with the old generation camera almost totally desaturated and smearing of the image (seen around letters of the chart). The new models show slight desaturation, but very little smearing. 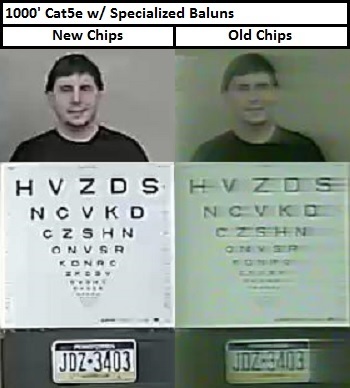 How Do I Know Which Versions I Have?

Both older and newer versions are compatible but connecting the older versions will deliver degraded quality compared to the newer one, as shown in the test images above.

Hikvision has not changed the part number of cameras and DVRs using new firmware and chips. Because of this, there is no clearly legible indication of which version a user is receiving. Instead, users with concerns may check their manufacturing code, listed on its box, with Hikvision support to find out which version they are using.

Hikvision also has no plans to pull existing stock with old chips and firmware from distribuation, instead planning to handle any issues as they arise on a case-by-case basis. Users with performance issues should contact support.