The interactive map below shows a sample of hacked and vulnerable Hikvision IP cameras across the USA and Europe. Hover over a marker to see an image from that camera:

[Note: this report and map was originally published on Dec 18th for the USA only. We have now updated it to include / display European cameras.]

This map helps visually demonstrate how wide the practical impact and risk of easy to exploit vulnerabilities. The devices mapped above all suffer from the Hikvision IP Camera backdoor, demonstrated in the video below:

Hikvision cameras vulnerable to the backdoor exploit are accessible across the US. Many of these cameras have already been exploited, altered to show "HACKED" in place of the camera name as one example: 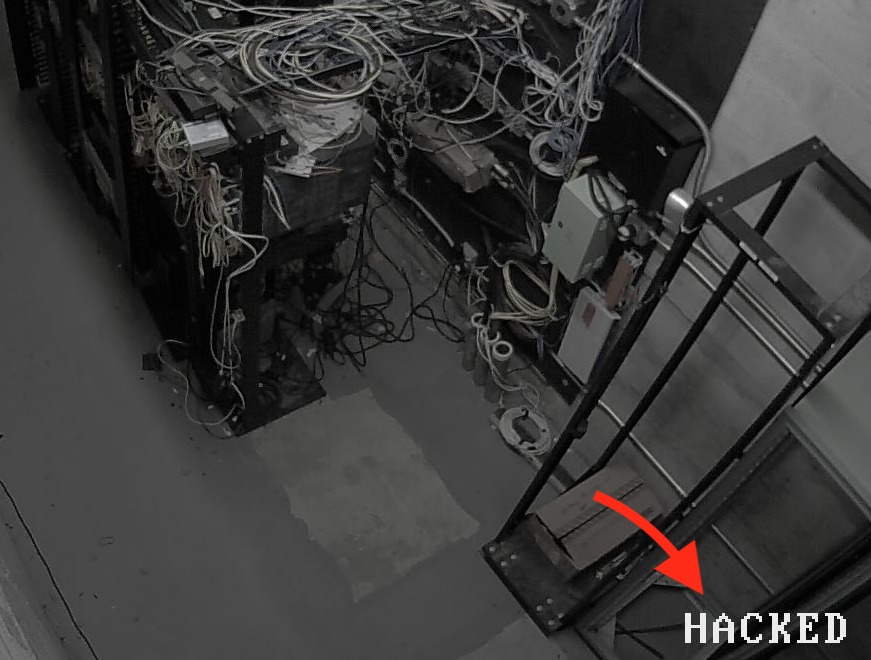 There are ~3,400 yellow markers for vulnerable cameras, and ~700 red markers for "HACKED" cameras (note in some cases, the OSD text is disabled, so while the camera name has been altered, it may not be shown in the image).

The average firmware found on the vulnerable cameras had a build date over 2 years old, showing that many users do not update firmware once a device is setup.

This is how IPVM built the interactive map. Device IPs were exported from Shodan, the result of a search for Hikvision cameras globally. Each device was evaluated against 3 key criteria:

If the above criteria were met, a snapshot image using a public URL (/onvif-http/snapshot?auth=YWRtaW46MTEK) was taken and logged, along with latitude/longitude coordinates provided by the IP geo lookup. These scans were done throughout December 2017, though some devices had inaccurate time stamps that may indicate other dates.

IP address geolocation services typically do not provide precise locations, so camera locations shown will be accurate to a general area but not the exact location.

The geolocation data was used to plot points, using Google Maps, with the snapshots associated with each camera/location to be displayed when hovering over the point.

The EU General Data Protection Regulation (GDPR) [link no longer available], set to go in effect May 25, 2018, specifies potential fines for companies that expose data that can directly or indirectly identify a citizen of the EU without their consent. By shipping cameras with a hard-coded backdoor, Hikvision exposes EU citizens to such data disclosures without consent. Though Hikvision argues they patched the backdoor once they were made aware of it, they still shipped millions of cameras with this vulnerability, of which numerous are installed across Europe. Many owners of these cameras are unaware of this backdoor which exposes their cameras.

This map shows only Hikvision-branded cameras, if OEMs are included (see 80+ Hikvision OEM Directory), the map would have 5,000+ points in the US alone, and many more in Europe.

Only Data From Shodan

Many Hikvision IP cameras have been reported as being brought offline, either to update firmware and resolve the vulnerability or to remove remote connectivity to them when users realize the risks of placing vulnerable cameras on the internet.

These cameras, by definition, are excluded, since they can no longer be reached.

Only Shows People Who Have Not Fixed

The number of Hikvision cameras that have been hacked in some way are certainly far greater, since this map only shows IP cameras that have not been fixed by December 2017. The reports of hacking peaked in October and November (following the September disclosure here), giving users a month, or more, to notice and resolve these issues.

Reports of Hikvision cameras having 'HACKED' text, or exhibiting other symptoms of hacking have been circulating for the past few months, e.g.: 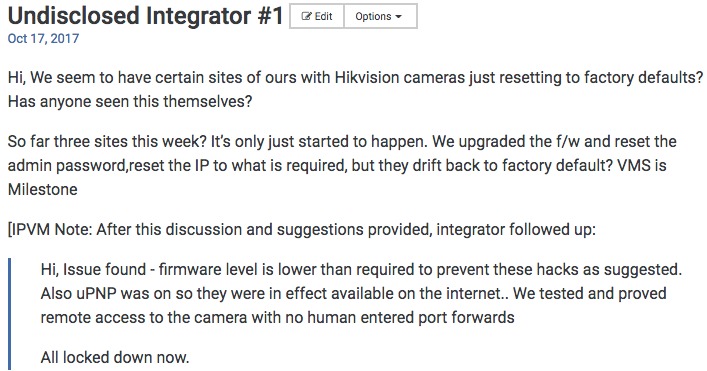 An ipcamtalk thread from a user experiencing their Hikvision camera being hacked: 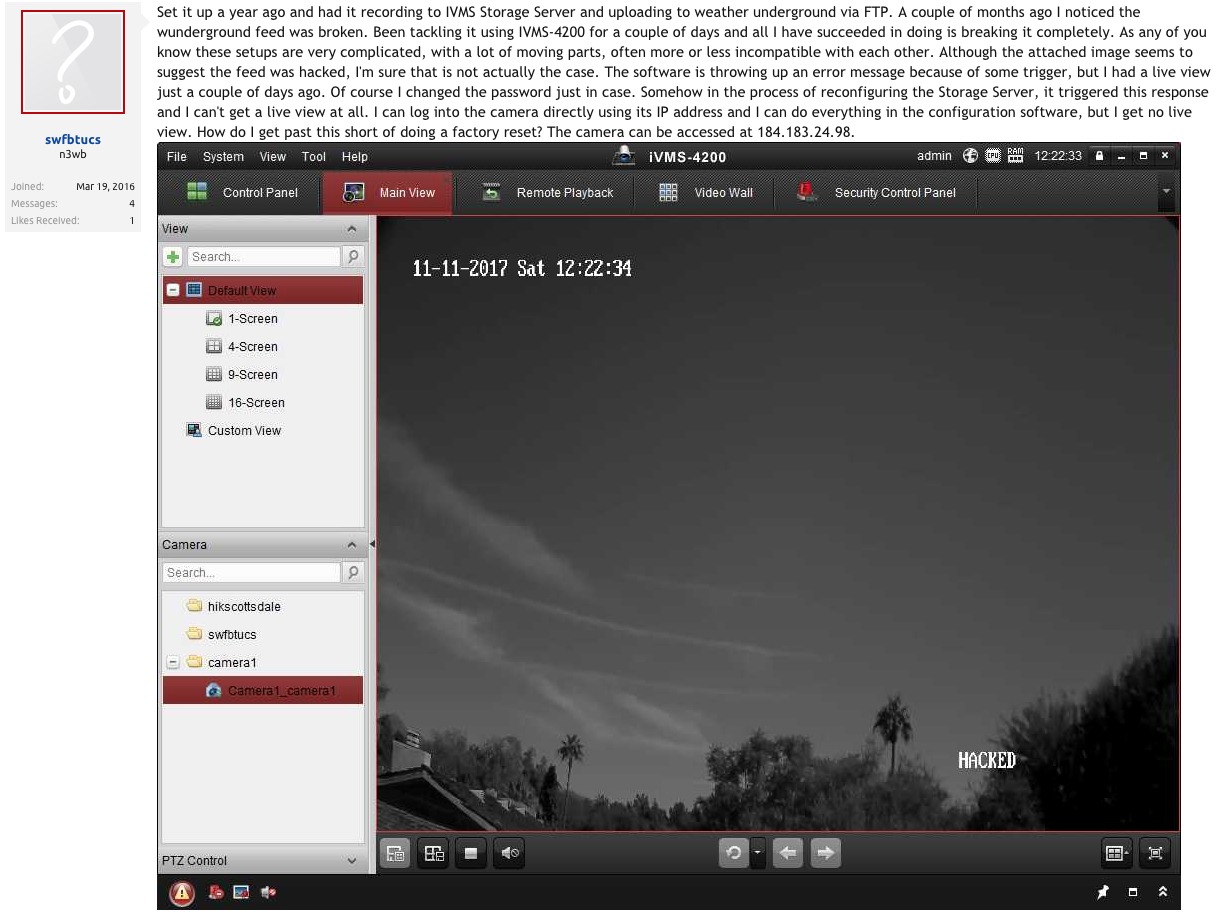 Other ipcamtalk threads from users experiencing cameras being factory reset via the backdoor exploit: 1, 2, 3.

Users should consider the following lessons:

Hikvision Global News Reports Directory on May 13, 2022
Hikvision has received the most global news reporting of any video...
Remote Network Access for Video Surveillance Guide on Jul 27, 2020
Remotely accessing surveillance systems is key in 2022, with more and more...
Hikvision Scrutinized In The Netherlands on Aug 15, 2019
Hikvision is facing unprecedented scrutiny in the Netherlands, at the same...
PRC China Government Blocks IPVM on Oct 22, 2018
IPVM has been blocked by the PRC China government without any notice or...
"New Zealand Govt Uses Chinese Cameras Banned In US", Considers Security Audit on Oct 12, 2018
Newsroom NZ has issued a report: "NZ Govt uses Chinese cameras banned in...
Hikvision HQ Contradicts Cybersecurity Director on Mar 07, 2018
Hikvision HQ has contradicted Hikvision USA's Director of Cybersecurity,...
Comments (73) : Subscribers only. Login. or Join.