Hikvision devices with default passwords and remote network access enabled (via DDNS, public IPs, etc.) have experienced wide spread hacking over the past month locking out users, IPVM has confirmed.

This is new, and from what has been reported by those affected, appears to be different than Mirai. During the Mirai botnet attacks in 2016, there were no reports of Hikvision devices being hacked.

[UPDATE: 4 hours after IPVM's report was released, Hikvision sent an email to its dealers admitting this.]

US, UK and New Zealand integrators have all reported cases of Hikvision recorders being attacked, at least hundreds of devices in the past month from just these reports:

Today lots of Hikvision customers dvr/nvrs, used till now with default password (12345), seem to have changed password by themselves.

I just experienced my first one this week. Symptom was DVR not accessible via browser or app, password didn't work. I had to go on site and run the password reset. Was an older firmware and it let me. When I got back in I found this: I never created a "system" account.

I have had a couple Interlogix cameras (same thing as Hikvision renamed) do the same thing and we had to go out and physically factory default the camera. The weird think about it is that they are attached to an Avigilon VMS and not open to the Internet. Something very odd going on here and I can't figure it out.

We've had four customers in the last couple of weeks locked out of their Hikvision recorders by what looks like bot. All clients were on old firmware with default admin password of 12345 and default ports -I know, I know, they were all installs from years ago who we hadn't visited since. In all cases the admin password has changed and a new SYSTEM user has been added. Our Hikvision distributor has been inundated with pw reset code requests.

In every case reported so far, the recorders were using the default admin password "12345", and had remote access to the web interface on port 8000. Firmware versions affected are unknown, but are likely older versions before Hikvision forced users to set their own admin password.

The attack changes the default admin password, and adds a new account, "system" to the device. So far there is no evidence the recorders have been used in any kind of botnet attack.

Botnets move fast across the Internet - iterating over the finite number of public IP addresses is straightforward, and tools like Shodan plus Hikvision's Online still unfixed enumeration vulnerability make it easy to find devices that may be susceptible to a known exploit. Chances are, if your Hikvision recorder has an admin password of "12345", or an easily guessed password, and is accessible via the public Internet, it has already been hacked.

If your recorder has a "system" account in the user list that was not added on purpose, it has been affected:

If you have been hacked, you will need to restore the admin password to gain access to the device. One integrator reported success using Hikvision's password reset function, others have done a physical restore/reset on the device.

If you have not been hacked, ensure the admin password is set to something uncommon and not easily guessed. Additionally, ensure firmware is kept up to date, check Hikvision's firmware directory [link no longer available] for latest versions.

Because affected devices have not had ports like telnet or SSH open, or were running firmware builds known to have these services disabled, the most likely scenario is that the attack utilizes the web UI to create the new account and alter the admin password.

The attack can most likely try passwords other than "12345", similar to how Mirai has a list of common username/password combinations it tries on each device it attacks.

This attack also has the potential to infect many more devices than Mirai did, as it only requires remote access to the standard user interface, and does not require telnet or SSH access. Where Mirai relied on devices with no firewall, or poorly configured firewalls, this attack can target devices that are behind a firewall, as long as they have basic remote access enabled.

What the attack does that may not be visible, such as upload scripts or files intended to be called later, after enough devices are infected to create a strong botnet army, is not yet known. Because of this, the best course of action would be to completely reset the device, upgrade to latest firmware, and set a strong admin password before putting it back online.

While Hikvision is responsible for making such equipment, the integrators and users involved are responsible, both for not having upgraded their equipment in 2 years or more since these risks were made clear by Hikvision, and by incidents like the Mirai botnet that relied on poorly secured devices.

While Hikvision can rightfully point to its efforts to improve in the past 2 years, they will still suffer from the various integrators and end users who are impacted by this botnet hacking, and having to spend time resetting or restoring affected units.

Hikvision has obviously known about this for weeks. If IPVM is getting a half dozen reports, that means Hikvision must have gotten 500 or 5,000 reports. However, instead of doing the right thing and letting people know immediately about this, they choose to hide it until IPVM's report forced them to acknowledge it. By delaying, they have put more users at risk.

4 hours after IPVM's report was released, Hikvision (USA) sent an email to its dealers admitting this: 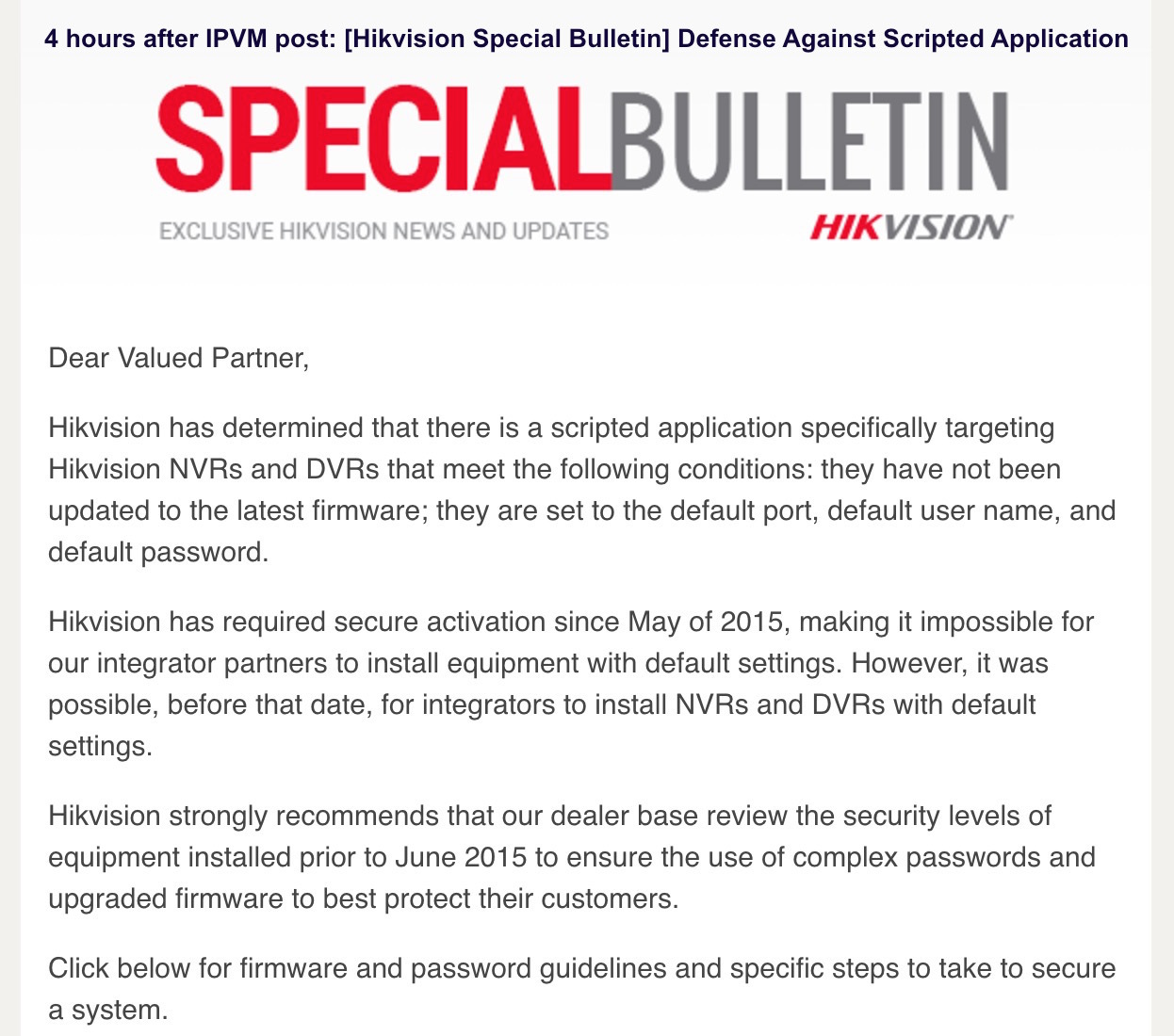 Here is Hikvision's full "Defense' statement about the attacks.

Canon Responds To IP Camera Hacks on May 30, 2018
Canon cameras made international news earlier this month, with reports of...
Hikvision Happy With Bad Security Unless Hit With Bad Press on Aug 28, 2017
Hikvision is happy to have bad cyber security unless they are hit with bad...
Hikvision Responds To Cracked Security Codes on Aug 15, 2017
Hikvision has responded to IPVM's report on Hikvision's security code being...
Morten Tor Nielsen Defends Hikvision on Jun 12, 2017
Morten Tor Nielsen, veteran software developer for Prescienta working for...
Hikvision Backdoor Confirmed on May 08, 2017
The US Department of Homeland Security's Industrial Control Systems Cyber...
Manufacturers Cheer ISC West 2017 Performance on Apr 11, 2017
ISC West 2017 showed strong satisfaction results from manufacturers, similar...
Q1 2017 Video Surveillance Market Review on Mar 30, 2017
These are the most notable moves and events for January - March 2017 in the...
Uniview Weak Local / Strong Remote Password Policy Tested on Mar 14, 2017
With the continuing onslaught of cyber-security breaches (see Dahua backdoor...
Who Is Hacking Hikvision Devices? on Mar 06, 2017
Someone or organization is mass hacking Hikvision devices, actively and...
Dahua Backdoor Uncovered on Mar 06, 2017
A major cyber security vulnerability across many Dahua products has been...
Comments (82) : Subscribers only. Login. or Join.