4MP models hit with a splash last year, offering increased resolution and true WDR at past 1080p prices. However, these models have been limited to the low end, with fixed lenses and limited options.

We bought and tested these new models from Dahua and Hikvision (Dahua IPC-HDBW5421E-Z and Hikvision DS-2CD2742FWD-ISZ) to see how they stack up against low cost 4MP bullets as well as high performing 1080p cameras.

See our full results inside.

The Dahua and Hikvision models tested here are solid value options for those looking for >1080p performance but requiring remote focus and zoom lacking in lower cost models. While they come at a ~$150 premium over fixed lens IR models, they are significantly less expensive than many/most domes with similar featuresets (IP66, true WDR, IR, motorized zoom), ~$300 online vs. an average of nearly ~$700.

The Dahua HDBW5421 outperformed the Hikvision 2742 in our tests, with more even IR coverage resulting in better low light performance, slightly better WDR imaging, and easier focus due to on board buttons/remote autofocus (both features the Hikvision model lacks).

However, the Hikvision 2742's bandwidth consumption was a fraction of the Dahua 4MP model in our tests due to its inclusion of their H.264+ smart CODEC. Storage costs may be significantly lower because of this when using the Hikvision camera.

However, this price is ~60% lower than the average price of outdoor zoom models, ~$750.

Both cameras are about average sized for outdoor domes, with the Hikvision 2742 moderately smaller than the Dahua 5421. Features of both are similar with two key points:

We take a look at these and other issues in this video:

While both 4MP models tested include zoom lenses, there are some key differences between the two:

Focus on the Hikvision 2742 is manual only via the web interface. The "Auxiliary Focus" button found in the live view does not trigger autofocus as it does in other models.

As mentioned above, the Dahua 5421 includes physical zoom controls on the camera itself, and tracked focus as the camera was zoomed in/out. This simplified aiming and focusing compared to Hikvision, as everything could be performed at the camera, instead of requiring the web interface to set zoom/focus. 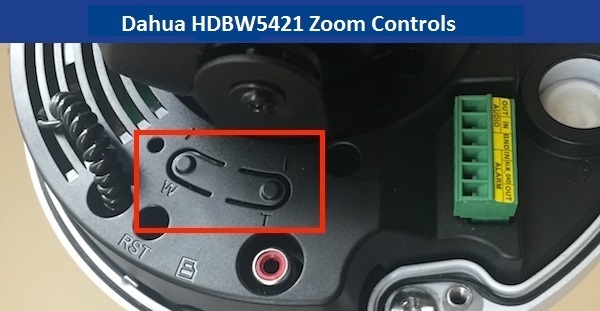 We started testing in a wide open office field of view, ~58'. 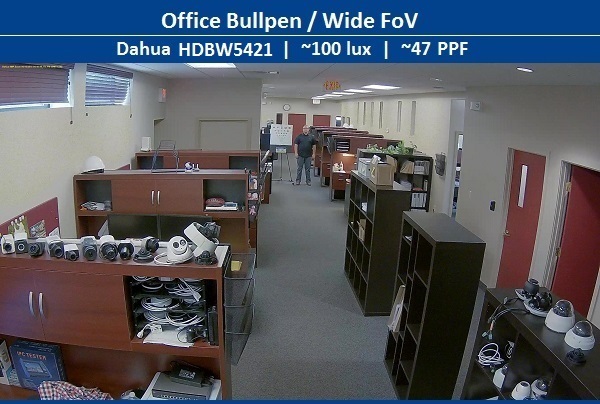 Details delivered by the cameras at this PPF level are similar, with slight advantage to Dahua due to overexposure in both Hikvision models. The high end 1080p model is shown here for reference / comparison purposes against typical lower resolution models. 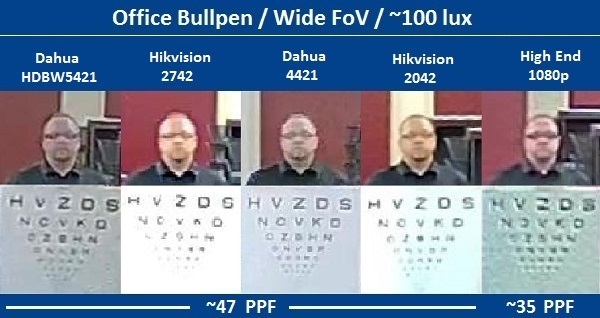 We also tested in a narrower field of view, ~34' wide: 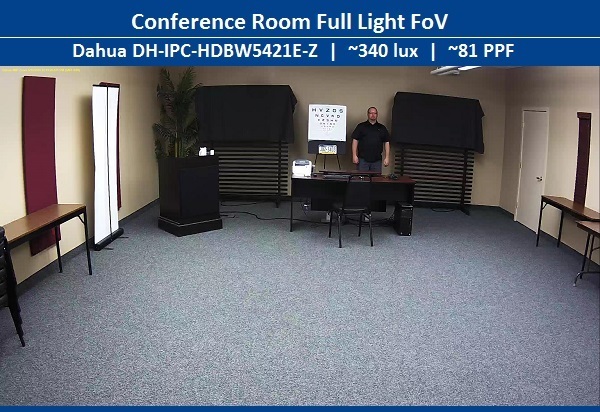 At this PPF level, details in all 4MP cameras are strong and similar. 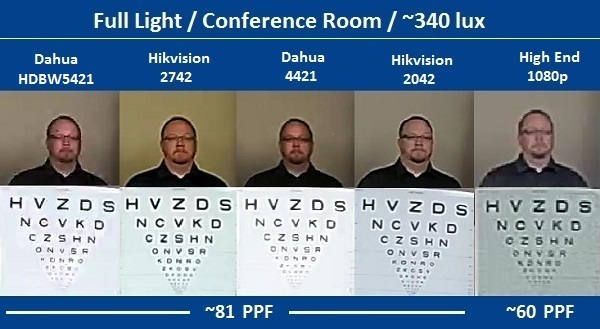 The IR pattern of the Dahua 5421 was even across the full field of view in our tests. However, the Hikvision 2742 had a strong center hot spot, moderately overexposing subjects, but was very dark toward the edges of the FOV. The difference between the two is seen in the animation below:

At this light level, with IR on, both zoom models produce weaker details than their low cost bullet equivalents due to slight blurrer. Note that both cameras were remotely focused before and after switching to night mode. 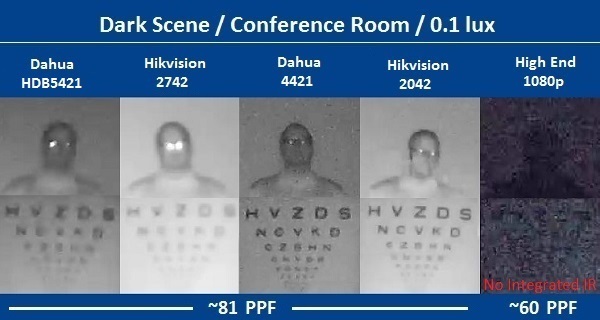 We tested WDR in a warehouse scene, against strong backlight as well as darker areas: 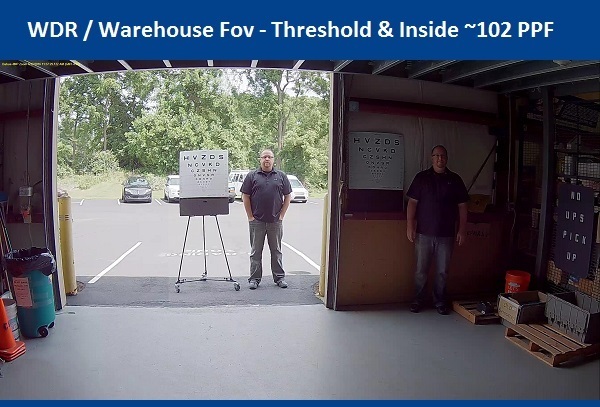 The Dahua HDBW5421 zoom model produced the strongest details in this scene, in both the bright and dark areas of the scene, with a slight edge over the Hikvision 2742. Both zoom models' WDR performance was similar to or slightly better than their low cost bullet counterparts. 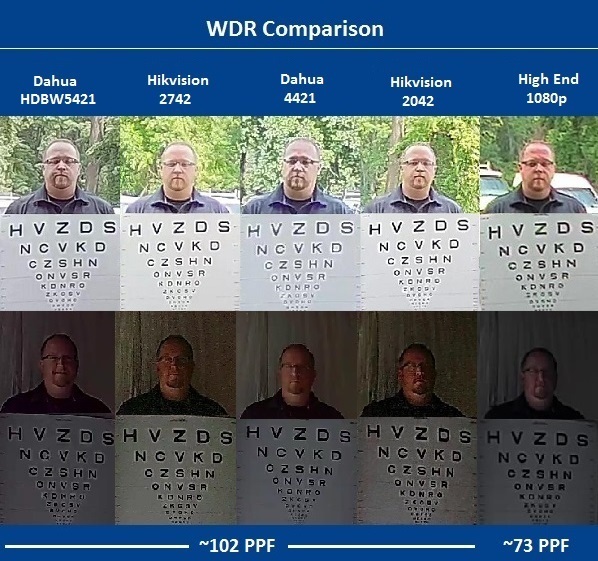 Both Hikvision models in this test include their H.264+ smart CODEC, resulting in much lower average bitrates than competitive Dahua models. The Hikvision 4MP bullet had the lowest overall bitrates of cameras in this test, though the 2742 zoom dome was still much lower than the Dahua 5421. 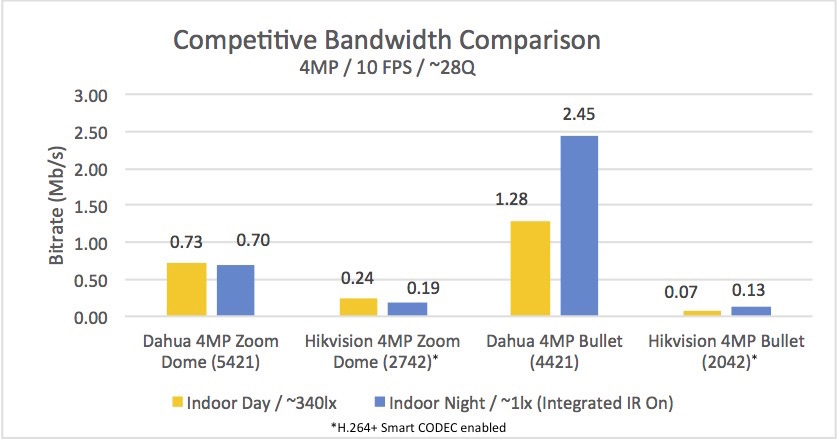