This year's ISC West witnessed a dramatic increase in tweeting about the show, though overwhelmingly from manufacturers and PR people. To track tweets, one can search Twitter for tweets with the hashtag for the show (#ISCW13). Unfortunately, one crappy 'manufacturer' ran a contest that hijacked this hashtag so when you search for tweets you have to wade through dozens of garbage promotional ones.

Here's 'tobeapea' who bills himself as a 'A dad wo loves to enter contests [sic]':

I agree that the 'RT to win' campaign is highly annoying when using the events official hashtag...... and XTSCORP must have learned it from Stanley Security, since they did the same thing last year (and this year too).

Beyond the annoyance factor for those that actually want to use the hashtag for live information updates, it is completely pointless for the company running them.

Take a look at the follower trend for @XTSCORP over the last 3 months below: 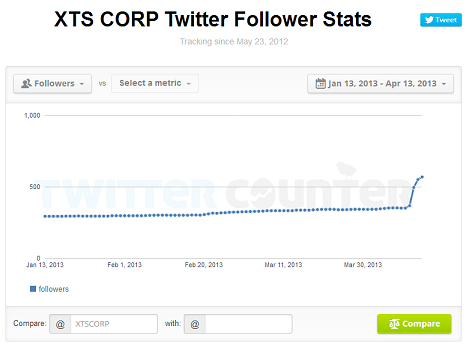 They gained over 220 new followers over 3 days (a 62% increase).... all of whom were not at the show and wouldn't know a thermal camera from a toaster. And it follows that they will never buy anything from XTSCORP, so what is the purpose?

At least they didn't use fake twitter followers like Mitt Romney did..... but it's a close 2nd place for the most pointless marketing move ever.

Appears as if Chinese manfucturer Etrovision is their primary supplier....

Funny... Etrovision was also at ISCW in the booth right next to BRS Labs at the entrance to AsiaTown.