Proximity style credentials carry a huge risk: they can be passively read by thieves, who take the stolen information and gain unlawful entry into access controlled buildings. HID Global, a major credential provider, has filed patents that keeps prox credentials locked tight until moving it in a specific way. Could this new authentication inject a dose of high security into a vulnerable EAC mainstay? We look at HID's "Gesture" patents in this note.

HID filed two different patents that address the same 'gesture protected credential' concept. The patents detail "an RFID device that restricts data transmissions until it has been moved in a particular way by the holder". Essentially, this is an access control credential that must be physically moved in a specific pattern in order to release it's information to a reader. 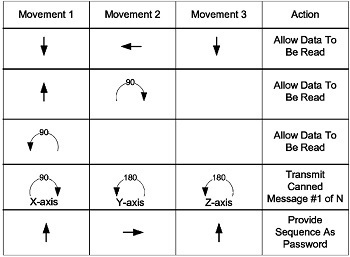 For example, a single gesture mimicking the turn of a door key could potentially 'turn on' a proximity credential so it can be read, up to a three-factor combination requiring movement in different dimensions. One aspect that is clear from the list is that only specific gestures are supported, and are not 'user definable'. However, it is also clear the user will have some discretion on how many gestures are required to make a credential work.

The biggest advantage "gesturing" provides is that proximity credentials cannot be passively read in a cloning attack. For a demonstration on the snooping vulnerability, see the video below:

The patent description details a proximity-style credential design with several new elements. The key addition is the MEMS, or the "MicroElectro-Mechanical System" component that is a small, solid state accelerometer. It is this mechanism that senses the orientation of the card, and prevents the coil from sending credential information until a specific pattern is followed.

The image below shows the "gesture concept" design next to an existing Multiclass credential. The similarities between the designs are obvious, with the additional MEMS component fitting into available space in standard ISO/IEC card sizes:

The patent abstract describes the relative cost of adding MEMS to be low and mass producible:

Because MEMS devices are manufactured using batch fabrication techniques similar to those used for integrated circuits, unprecedented levels of functionality, reliability, and sophistication can be placed on a small silicon chip at a relatively low cost.

While the exact prices of "Gesture Credentials" have not been established, the technology does not appear to add significant cost to credential BOMs.

While HID has yet to formally announce "gesture products", the technology depends only on credentials to work, meaning there is no apparent requirement to replace readers. After the credential is 'unlocked' by gesturing, it interfaces with readers in the same way and in the same formats as existing Prox, iClass, and MiFARE/DESfire credentials.

This potential could enhance security of existing systems, and greatly mitigate the risk of lost, stolen, or snooped credentials. "Gesturing" adds a "Something You Know" authentication layer to classic single-factor credentials, and unless an unauthorised user has privileged information on how to 'unlock' the credential, it will likely be useless.

The patent scope does not only address 'credential cards', but describes the applications in a variety of forms:

"As can be appreciated, an RFID device can be implemented as a part of an ID/access card, smart card, RF tag, cellular phone, Personal Digital Assistant (PDA), key fob, and the like."

HID has patented gesturing in all common RFID device forms.  While notional designs for phones or fobs were not given, we anticipate examples of "gesture credentials" in forms that currently support proximity-style tokens.

HID 'Twist and Go' Access Control on Sep 30, 2014
Credential giant HID Global is making it easier to use cell phones as...
Comments (8) : Members only. Login. or Join.