HID is the biggest name in IP door controllers, especially for single or dual door controllers, with their Edge line. Now, as surveillance companies, like Axis and Milestone, target the access control market, competition may heat up. 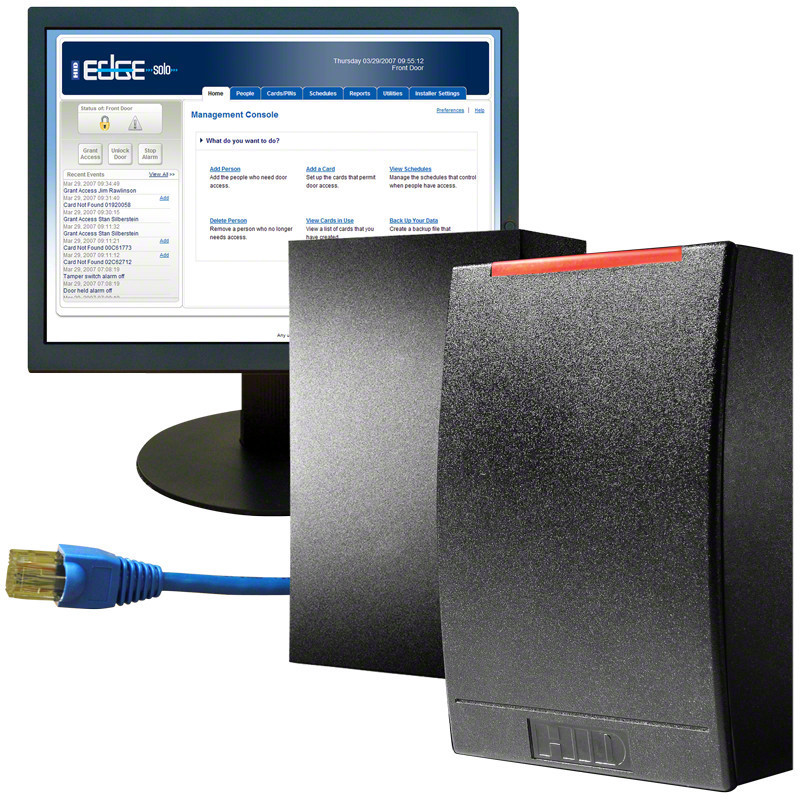 HID offers a very interesting turnkey solution, "Solo", for single doors. While nearly identical in appearance and construction to HID Edge controllers, "Solo" is limited to managing a single door. It comes loaded with firmware that enables basic access control functions such as managing door locks and readers, as well as storing cardholder information, credential details, and access schedules onboard the controller.

Key deficiencies or weaknesses include:

While two versions of HID Edge "Solo" have been announced (an EVO and older 'non EVO' version) and combo units including a contactless reader or those without. Our test below reviews the non EVO, non reader/ integrated variant available in distribution and online for ~$275.

HID Edge Solo is a browser based access system. Once given a static IP address, the device is accessible from any browser connected to the same LAN. We tested functionality with IE10, Chrome, and Safari and were able to see the interface on all three browsers. However, IE was the most reliable application, as the Solo interface often hung during loading with the other browsers and often took several reloads to bring up. Remote accessibility outside the LAN is possible via VPN or external router configuration, but Solo offers no preconfigured or automated method for outside access.

The 'live status view' is a pane on the displaying recent activity and with manual override controls that remains visible regardless of which other tabs or functions are used in the interface. Aside from displaying recent card reads and door events, options to manually lock/unlock the door and clear alarms are given three prominent buttons. The video below gives a good overview of this screen:

The process of either adding a card or a user is possible from several screens. The Solo stores a maximum of 1000 users or cards. For example, if a single user has four assigned cards, then four of the one thousand records are used. However, considering that only one door falls in the scope of the controller, this is not likely a significant limitation. The easier method of enrolling a new person and associating a credential card to them is shown in the overview video below:

A central aspect of any controller is tweaking default settings to match the specific opening it controls. The Solo interface offers a surprising number of adjustable individual settings; everything from Door Unlock Times, to REX hardware configuration, and which reader types are used. While limited on choices (only non-iClass HID card formats and keypad readers are supported), the controller should be able to control most swinging doors without issue. However, more complicated opening involving multiple doors (ie: mantraps) or gates may experience logical timing or credential limitation issues. The video below expands on these details:

Edge Solo offers rudimentary reporting features that requires additional applications to make much use of. The data stored on the controller is grouped into coarse categories (ie: Card Holders, Door Events, Door Schedules) that are downloaded to a workstation into a .csv formatted file. From there, advanced queries (ie: "When did Card Holder 3 scan into the door last week?") must be filtered or sorted in another offline program. Our clip below demonstrates Solo's "Report" feature:

In addition, Solo supports a basic number of 'alerts' that are configurable to execute a number of actions ranging from 'local door alarm' - making the reader beep and flash - to sending alarm notification to a URL or email address. While the range of alerts is fixed and cannot be expanded, and the alerting options are basic, most single door access applications will be sufficiently covered by the types available. The video below describes this in detail:

Finally, in terms of installability, Solo can be inexpensively mounted on standard 4"x4" electrical boxes or tucked away in small metal enclosures. The controller itself has the option for PoE power, and only cabling leading to door components and to the network is needed for operation. The controller's size and standard mounting configuration is show in the video below:

The biggest limitation of Solo is that it only controls one door. By default, this limits use of the platform to very small applications that control individual areas like storage areas or exercise rooms, individual offices, or single-lane vehicle gates.