Are Mobile Credentials ready for primetime?  ASSA ABLOY [link no longer available] / HID, who have invested heavily in the technology, posted a webcast of their joint 'Access Control Goes Mobile' event at ISC West. Using mobile devices to host access credentials is a growing trend, with recent development centering around the inclusion of NFC technology into credential readers, door hardware, and smartphone devices. In this note, we examine the key takeaways from that presentation.

We have embedded the entire webcast here for reference. (note: the player omits timestamps so its hard to track by time):

In the webcast, HID / ASSA makes a number of important points: 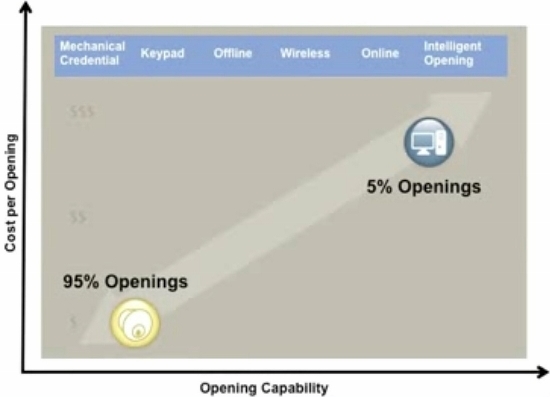 2. BYOD, or 'Bring Your Own Device', is a growing trend and security concern for corporate IT/security departments. According to the presentation, 37% of all tablets sold are used in corporate environments, but owned by employees. As we noted in our NFC examination, successfully managing and administrating devices not owned by companies is an awkward situation. While a variety of policy and authentication programs are being developed, no 'clear answer' exists in the market. HID demonstrated a 'soft token' system in an early attempt to bridge this gap.

3. Not supporting Picture IDs significantly limits the value of NFC. For high security areas (where image verifications are used for dual authentication) NFC still requires carrying a badge photo which undermines the main claimed benefit of NFC. Since NFC technology is designed as a low bandwidth, low energy transmission medium, the time required to transmit high resolutions picture files is excessive and would be prone to transmission error.

4. Despite being positioned as a game changer, we disagree that NFC will bring access control to new doors. Bringing access controls to the untapped "95%" of doors has not occured even though several cheap alternatives to hard wired access controlled door exist. If the major incentive to move to NFC is additional security, consider that multiple low-cost proximity card leversets have attempted to gain the same market. If NFC's convenience is the push, then consider that keypad operated locks (requiring no external credential at all) have been in the market for many years.

The concerns we raised in our initial NFC analysis still stand, and it is clear that 'mobile credential' technology is still being developed and working through growing pains. However, these vendors make it clear that NFC technology will continue to recieve development attention for the near future.