Axis: Good or Bad For Partners?

Is Axis good or bad for its partners? While no company has done more than Axis to champion and grow the IP video surveillance market, many partners - both integrators and manufacturers - express fear and frustration about the aggressive Swedish juggernaut. In this note, we examine Axis's product development and channel tactics, looking at how they hurt traditional security partnerships.

Axis's partner toast at the ISC West 2012 show highlights this issue. Watch the short video below:

Undoubtedly, this is a classy and savvy move. At a show centered on integrators and manufacturers, celebrating one's partners makes perfect sense. And yet, what they featured at the show undercuts such celebration.

Many Axis employees wore a button that said, "Ask me how I fit a DVR in my Pocket!" as shown below: 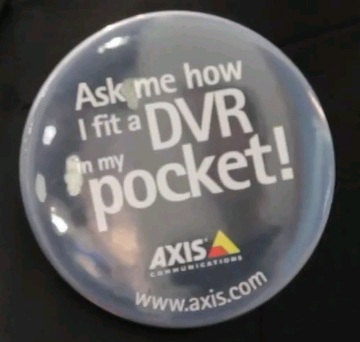 This button promotes their new release of Axis Camera Companion (ACC), an offering that allows a tiny SD card that fits in a pocket to be put inside an Axis camera and replace a DVR.

Pitting ACC against DVRs is a clever way for Axis to promote its new product while supporting its partners. 'DVRs' and the people who sell them are typically more 'enemies' than partners to Axis. A DVR replacement is unlikely to offend as many as VMS elimination.

Our imagery in our original ACC report was nearly the opposite. As the pitcture below shows, we see the bigger threat to Axis partners like Milestone: 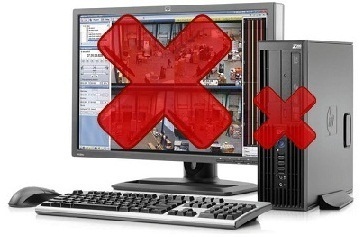 The value proposition of ACC is much more threatening to VMS suppliers than DVR ones. The main reason people buy DVRs in the sub 16 camera market is because it is so cheap. Axis's offering does not threaten low end DVRs but it does higher end small camera systems that traditionally use Milestone Essential or other low cost VMS software. [We detail this analysis in our ACC report.]

A mixture of fear and relief characterize many of Axis VMS partners that we discussed this. Fear because they clearly see Axis make major inroads into their core market. Relief that the first version of ACC is not sophisticated enough to target bigger, more demanding customers. And yet they realize that Axis will certainly continue to improve ACC as it expands its offerings.

Worse, it must suck to be an AVHS / Axis VSaaS partner right now. Over the past year, a flood of new partnerships were announced (we referred to them as 'desperate moves' at that time). Now, it looks even more grim. Field reports indicate weak adoption of AVHS (again, not surprising given the weak ROI). Add ACC and Axis is giving away serverless recording, a core feature to the AVHS offering. This makes selling AVHS even tougher.

Undoubtedly, integrators have great respect and appreciation for Axis products yet often do not see them as a great 'partner'. On the positive side, Axis is clearly integrator's favorite camera manufacturer, praised for a broad range of high quality products with strong support. On the negative side, integrators routinely complain about ubiqutious Axis product availability and low margins. While Axis does have sales and support programs, Axis channel tactics are frequently debated [link no longer available].

The number one integrator complaint about Axis is that their cameras can be bought everywhere. This makes it extremely simple for end users to price check online and much more difficult to obtain higher margins. The combination of Axis's huge size, well known brand and broad availability makes them the poster child for declining margins.

The traditionally preferred integrator partner chooses just a few integrators in each region and actively helps them close deals. For many integrators, this is the 'dream' scenario where the integrator gets some level of exclusivity, or at least limited competition, that helps them increase margins and have an offering their competitors do not. Axis is clearly not that. Indeed, Axis's success has likely done more than anyone else to undercut this traditional approach.

The best and worst thing Axis has done for its partners is execute at an amazingly high level. It is clearly good for their partners that Axis offers such a broad array of innovative, quality products. On the other hand, their product strengths make them much less dependent on partners to pitch or promote their offerings. This has allowed Axis to cut out the fat of traditional partner arrangements and scale to an unprecedented level. We see no signs of this trend slowing down. The future of surveillance technology, with smarter cameras, cloud based access and Internet outreach will enable Axis to deliver even more value with less help from partners. How this plays out with Axis's integrator and manufacturer partners will be interesting indeed.