People have been waiting for H.265 for nearly 2 years now.

In this note, we answer: who showed it, what they showed, what they are using, what VMSes are supporting it, and when will this impact the market.

Overwhelmingly, the manufacturers showing H.265 were from Asia (this excludes Aventura, the American company with a proprietary H.265 offering since 2013).

By contrast, not big name Western or Japanese manufacturer was showing or even hinting at H.265. The typical response from them is that H.265 is not ready.

Hikvision displayed their new 1080p H.265 model next to an existing H.264 camera, showing a nearly 50% reduction in bitrate: 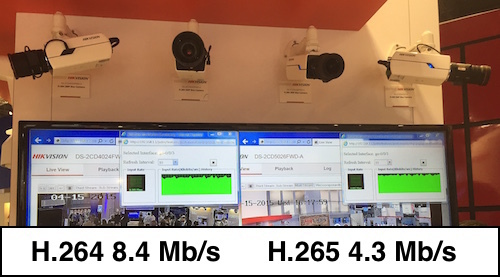 It is far too early to determine how much bandwidth savings will exist. For example, Hikvision's 4.3Mb/s for 1080p H.265 is not low, though so much depends on the scene, compression settings used, etc.

What Are They Using? Hisilcon

Many (or most) of these cameras are using H.265 chips from Hisilicon, the earliest SoC manufacturer to adopt the CODEC. Ambarella informs us that their S3 H.265 platform will not be in full production until Q3 this year.

Ambarella is the far more popular / common choice for Western manufacturers and is considered to be higher end, higher performance.

There is an active debate about how much bandwidth savings the Hilsilicon chips will deliver and how strong their H.265 implementation is.

What VMSes are Supporting this?

Almost all the Asian manufacturers pointed at their own upcoming NVRs as essentially an an 'end to end H.265 solution'. Even that is unclear. For example, Hikvision says that existing NVRs will not work with their upcoming H.265 cameras, requiring new 'H.265 NVRs' that will be released later this year.

No major VMS showed or claimed H.265 support. Though Vivotek had some strange H.265 Genetec press release, though Genetec clarified to us, "Genetec is not announcing H.265 support, we are announcing that we will work closely with Vivotek to add H.265 support in Security Center in concert with their own development."

When Will H.265 Impact the Market?

On the upside, there will certainly be multiple H.265 offerings hitting the market by the middle of 2015.

The downsides though are numerous:

This is shaping up to be an interesting battle between the 'Smart H.264' camp lead by Axis Zipstream and the H.265 camp lead by the Asian manufacturers. Given the proven bandwidth savings of H.265, one thing we hear from multiple manufacturers, is that they believe they can deliver similar savings by enabling dynamic GoP in their cameras. Let's say how that plays out and if they can deliver.

Overall, bandwidth savings are clearly moving up as a competitive differentiator, H.265 still has challenges but who wins is still unclear.