Genetec: We Do NOT Support Avigilon

Two of the most significant surveillance manufacturers in the world, countrymen even.

A member asked about a problem integrating Avigilon cameras with Genetec's VMS. Inside this note, we examine Genetec's response and debate who is right or wrong.

When asked about this question, Genetec responded:

"Not all ONVIF cameras are created equal – some are much more expensive to support and integrate than others, and in this case the cost of opportunity is not worth it to Genetec.  As such, Avigilon cameras are not on our supported devices list.  We’re happy to work with your undisclosed integrator to find a suitable solution that fits their client’s need."

We interpret this as the Québécois way of saying "Screw off Avigilon".

Genetec supports many manufacturers and Avigilon is clearly a larger one.

In practice, and as validated from IPVM testing, Avigilon cameras supporting ONVIF routinely can be integrated into Genetec. However, camera side motion does not work (though Genetec supports server side VMD so that could be used).

Nonetheless, given Genetec's position that Avigilon is officially not supported, there will be no technical support for Avigilon cameras, leaving users at their own risk for limited functionality and no motivation for Genetec to solve any problems with Avigilon cameras.

Genetec is not alone here.

Avigilon's adversarial approach has lead to this:

(1) Avigilon has aggressively gone after its partners / competitors, often misrepresenting functionality and policies (e.g., Avigilon Attack Artist), as well as routinely trying to flip deals specified for Exacq or Genetec to Avigilon's own VMS.

(2) Avigilon has purposefully blocked its own 'Pro' series cameras from working with other VMSes.

(3) Avigilon is now launching a patent licensing campaign going after its partners / competitors.

But What About 'Open'?

On the other hand, both Genetec and Exacq are supposed to be 'open' / 'open architecture' VMSes, and not supporting Avigilon, who is a prominent camera manufacturer, is not 'open'.

And this hurts end users who might want to use Avigilon cameras with Genetec or Exacq.

The fact that two of the most popular VMSes in the world refuse to support Avigilon cameras is a problem for Avigilon. Avigilon wants to expand more into the high end of the market where VMS choice is more central and those two are strong. Equally importantly, with more open 4K / 12MP coming out, Avigilon's edge with super high resolution is deteriorating.

Avigilon's best hope is to swing as many Exacq and Genetec systems away, using this as a lever.

Avigilon H3 series should work via ONVIF in 5.2. IPVM has never had issues, and we connected three Avigilon cameras to Genetec after this subject came up, and they connected and streamed fine.

So we recommend to start, a couple of things:

1. Make sure firmware is current.

2. Select Profile S as the product type when adding to Genetec.

2. Double check username and password. If you're using admin/admin (the default), make sure you select "specific" under the authentication options in Genetec. admin/admin should be the default for ONVIF in Genetec, but it never seems to work if I leave "Default logon" selected. 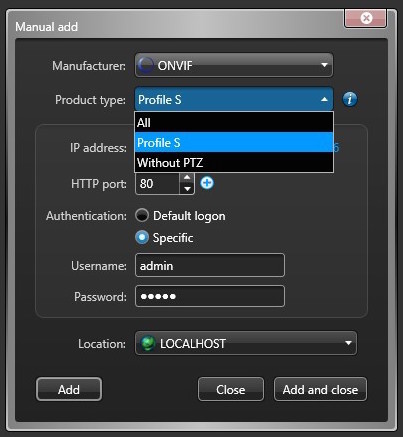 3. Make sure the camera is using Port 80 as the HTTP port. It's in the network tab of the menu of the Avigilon camera. Alternatively, if it is not using Port 80, you could change the above HTTP port selection to whatever the camera uses, if non-standard ports are desired for some reason.

Following those steps, we have always been successful adding Avigilon ONVIF cameras to Genetec.