180 and 360 degree cameras continue to increase in popularity, with a number of manufacturers releasing new product in the past year. Sentry360, best known for their 360º line, has now announced two models of 180º cameras to compliment them. In this note, we overview these cameras, Sentry360's novel approach to 180º imaging, and compare to options such as Arecont's SurroundVision, low-cost panoramics, and wide angle lenses. 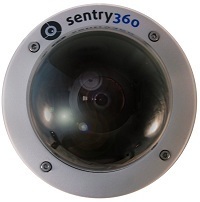 Aside from this custom dewarping, FullSight 180 models share most features with the FullSight 360 series. Users may see our overview of the Sentry360 line for more information.

We see three main competitive options for the FullSight 180 series:

Ultimately, the FullSight 180 series takes some steps to simplify integration of wide angle cameras to VMSs. However, they come at a price premium above other options. Whether they are best suited for a user's site or not depends on the field of view required, VMS being used, and operator preferences, as discussed above, factors which should be carefully considered.