Many IPVM end user members have reached out to us asking about a company offering wireless surveillance that sounds almost too good to be true. While most systems cost $10,000+ per camera, this company is offering it for more than 80% less, plus free infrastructure if the city can get a few businesses to buy cameras. How is this company doing that? Is it too good to be true? In this note, we examine the offerings of WildFire Connections.

In a video on their website, Wildfire claims that with their "WPI Plan", in conjunction with private sector funding, a wireless video surveillance system can be provided at "virtually no cost to the city or county government".  The only commitment is that five WildFire wireless cameras are purchased at a cost of $1,695-1,995 each. WildFire's video states that if the private sector purchases all of the cameras, there is no cost to the city or county. WildFire provides the wireless infrastructure, central NVR and central relay point of the network. For a small city or a county agency with no budget, this is an exciting prospect.

From speaking with Wildfire, the major issue we see is that the above camera prices do not include installation. They confirmed that a typical 5-camera base system for a small town generally costs between $17,000 and $18,000 fully installed. If the private sector purchased the cameras, that would still leave about $8,000 to $10,000 of installation costs unfunded, which is not exactly "virtually no cost". The city or county would have to absorb this cost or seek additional funding. Other items not included as part of the plan include poles, electric, conditioned space for NVR, internet access with a static IP address, and a suitable access point location such as a tall building or water tower for a the wireless network's main relay point.

Under this plan, WildFire owns and maintains the network relay, VMS and NVR and only WildFire's equipment can be added to the network. Additionally, WildFire usually requires that the local police or sheriff's department has remote access to the system in order to qualify for this plan, but that requirement can be waived. 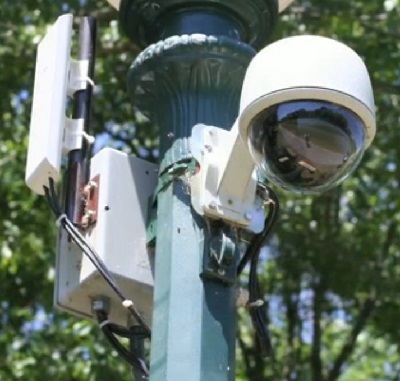 The Wildfire system uses ExacqVision as their VMS platform, coupled with a 4TB PC-based server (included with the base plan) targeted to record 5 cameras for 20 days. They build their own cameras in-house: a 2MP exterior fixed camera for $1,695 and a D1 exterior PTZ for $1,995.

The base system wireless network for small towns consists of a central relay aggregation point on a tall building or a water tower and Ubiquiti Nanostation nodes at the camera locations, each with a direct line of sight back to the central relay. For installations that have line of sight or distance issues that require repeaters or other equipment, WildFire will create a tailored network solution using other brands of wireless equipment as Ubiquiti is not well-suited for these applications and additional costs are involved.

When the network needs to be expanded, Wildfire will reconfigure the network and add equipment as needed as part of the expansion project costs, as the customer does not maintain the network. A "Police HotSpot" for patrol cars to view video is usually included with the base plan. WildFire monitors the health of the NVR and network and makes all system configuration changes at their network operations center. They offer maintenance plans, but are not required to be purchased. WildFire includes a one year warranty on all equipment. 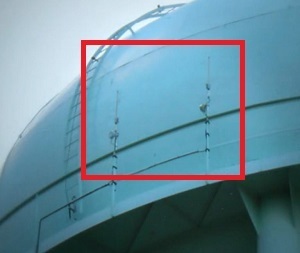 Outside of North Carolina, WildFire subcontracts their system installations to local security companies and sends a technician on-site for system commissioning. WildFire only includes a 90-day warranty on installation labor. Subcontracted installations always run the risk of low quality work, especially with the complexity of wireless surveillance. A city or county purchasing a WildFire system would be wise to carefully inspect the installation and make sure that any deficiencies are corrected quickly before the brief labor warranty expires.

Often, municipal end users are looking for a city wide surveillance system, covering many square miles. This 'kit' is not a solution for that. For such scale, much more expensive mesh wireless or fiber based systems would be required.

The overall cost of the system isn't "free" when installation and line of site network issues are factored in, but it still may be economical. However, it is as basic as a 5-camera wireless system can be with a backbone of Exacq, Ubiquiti, and proprietary cameras of unknown quality. For an agency with a limited budget, this may be a viable option and could at least spare itself the painful RFP process, but it comes with a cost of being tied to a proprietary system. For WildFire, it's an opportunity to get their foot in the door with a city or county and be well-positioned for future additions and upgrades.