Now, we have thermals cameras under $500, coming from the biggest name in the thermal business - FLIR.

The 'catch' is that the new ~$500 thermal cameras use an 80 x 60 sensor, which is 0.0005MP. Though the price is amazing, the resolution is incredibly low, raising the question what value does this have?

Here is a quick preview of a subject walking through a field captured by the new FLIR TCX Mini Bullet:

We tested the FLIR TCX Mini Bullet against an Avigilon Analytic camera, focusing on video analytic performance including:

For the ~$500 FLIR TCX Mini Bullet, we tested it with its own VMD and with an Avigilon Rialto unit, matched up against Avigilon analytics and Avigilon VMD.

Any camera, like this FLIR, with 480 total pixels is not going to deliver a great picture but can it compete with high-end cameras on video analytics?

This chart summarizes detection and false alarm performance of the FLIR T4325BN vs. Avigilon analytics and VMD, discussed in more detail below:

The T4325BN was able to detect objects crossing the field of view reliably at up to 185' distance/90' HFOV, about 50' greater than FLIR's claimed 40m/130' range. Objects approaching were detected at ~150' distance/75' HFOV, reduced compared to those crossing, but still above spec.

Compared to Avigilon's H3A 3MP analytic camera, daytime range was shorter. The Avigilon was able to reliably detect objects at over 220' and beyond. However, the H3A camera was only able to detect subjects at ~85' range/42' HFOV in low light (~3 lux) with IR on, compared to 140' in the FLIR TCX.

When connected to an Avigilon Rialto, the TCX was only able to detect objects at about ~100' from the camera (~50' HFOV), about 30% less than the T4325BN's on board VMD. Like Avigilon's H3 analytics, it was not prone to false alarms, with no activations overnight.

All of the tested VMSes (Avigilon, Exacq, Genetec, Milestone) connected to and received VMD events from the T4325BN without issue. However, in both Exacq and Genetec, the Dahua driver must be used, as VMD events are not received using the ONVIF integration.

The FLIR T4325BN sells for about $450 online. This pricing is drastically lower than past low-cost thermal camera models, which sold for ~$2000, and typical thermal models, which sell for $4000+. However, note that these models are 320x240 and up, 16x the resolution of the TCX.

This pricing is much higher than typical low cost outdoor IR cameras, however, which sell for as low as $100-150 for 720p or even 1080p models, and which provide identifying details the TCX does not (though with higher risk of false and missed VMD activations).

For detecting of objects (human, vehicle, animal), the TCX may outperform even high-end analytic cameras at night, when conditions for visible camera analytics are difficult due to low light and increased noise. However, daytime/full light performance is reduced compared to advanced analytic cameras, with shorter detection ranges.

If any identifying information is required, the TCX should be used in combination with a visible camera. Even at close range, few, if any, recognizable details are produced, making it unsuitable in these applications.

However, given its low price (relative to other thermal models), installing the TCX alongside a color megapixel camera is a possibility, providing more reliable detection using the TCX, along with higher resolution overview and detail images with the HD camera.

The TCX is similar in size and shape to compact integrated IR bullets. It is notably smaller than other thermal cameras, even those considered "compact", such as the DRS WatchMaster.

Note also that the camera includes "tribrid" output: IP as well as SD and HD analog. Users insert a terminator plug into the Ethernet jack to switch the camera from IP/analog to HD-CVI output.

In the video below, we review configuration of the TCX. The camera's web interface is extremely similar to Dahua cameras, with few changes, most notably the image settings page which contains only ROI controls for equalization (see below). Other options remain the same as Dahua models.

The TCX was supported by all VMSes we tested (including camera VMD): Avigilon, Exacq, Genetec, and Milestone. However, in Exacq and Genetec, the camera should be added using the Dahua driver. If added using ONVIF drivers, VMD events do not work. Avigilon and Milestone both received motion events using the ONVIF device type.

The TCX is low resolution, even compared to other thermal cameras, typically 320x240. This is immediately obvious when viewing human subjects, which look like moving blobs beyond short range, making the camera suitable only for detection, not any sort of recognition, with some difficulty even in classifying objects as human vs. large animal.

To demonstrate this, the image below compares the TCX to a 320x240 thermal camera and a 1080p integrated IR bullet in the same field of view. The low resolution TCX provides few details of the subject with which to even classify him as human, while the 320x240 camera clearly shows arms, legs, torso, and head. The 1080p camera is shown for reference, able to provide 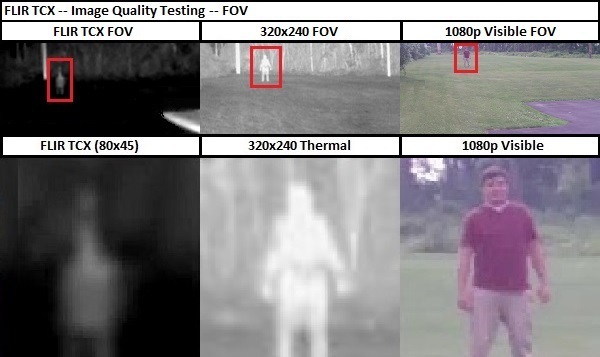 These differences are further emphasized in the video below, showing the TCX compared to a 1080p bullet camera with our subject in motion. He becomes moderately easier to discern as human due to his movements, but still difficult, and with little detail.

The TCX only one image quality control: "ROI." This setting changes the region of the image which the camera bases its greyscale on, improving or worsening contrast. Users should adjust this control according to their scene, as our tests showed it has significant (though visually subtle) impact on detection performance.

For example, the images below show three different equalization settings: full screen (default), ground, and center 25%. To the human eye, there is little diffence between each of these settings, with the human subject only minimally visible in each. However, the slight increase in contrast provided by the center 25% equalization setting results in much better motion detection performance, as the camera is able to pick up more subtle changes. 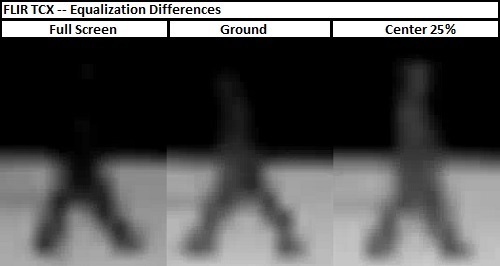 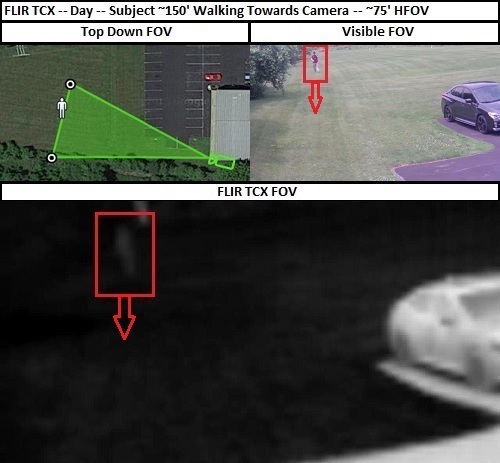 Range was even greater when the subject moved across the FOV, with reliable detection at ~185'/56m. 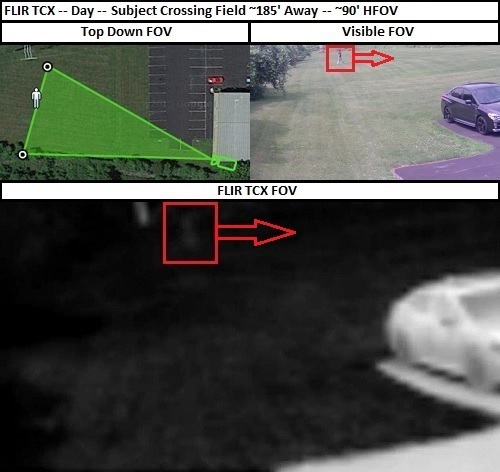 Note that this test was done on a hot summer day, ~90° F with high humidity, making background objects nearly the same temperature as our human subject.

Nighttime performance was similar, though slightly reduced compared to daytime, 140' distance/70' HFOV. This may be due to increased humidity (due to a storm front moving in), reducing contrast and clarity. 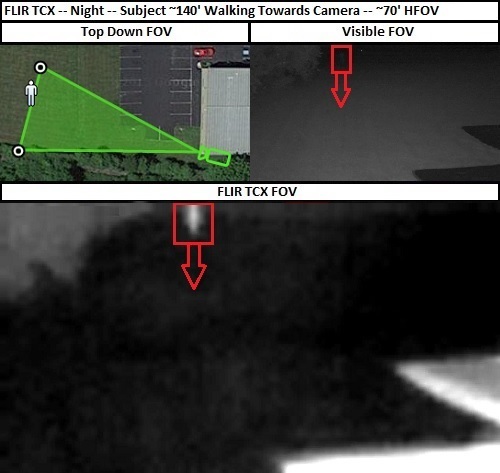 The T4325BN was not prone to false motion activations due to environmental factors (moving foliage or debris) nor due to digital noise common in visible cameras.

As an example, this screenshot shows the timeline for both the TCX and a 1080p IR bullet in Exacq, from 12AM to 1AM. While the 1080p IR camera records for nearly the entire hour, despite no actual activity in the scene, the T4325BN does not activate at all.

Analytics cameras such as the Avigilon H3A performed better in false alarm rejection, with 3-4 alarms per night, though still slightly higher than the FLIR TCX.

The TCX worked poorly with Avigilon's analytics, running on a Rialto I4. Detection performance was reduced by ~50' distance/25' HFOV seen in the images below. Because the Rialto classifies objects as human using geometry and movement characteristics, it was unable to determine these using the low resolution TCX video until the subject is nearer, while the TCX's internal VMD simply looks for pixel changes. 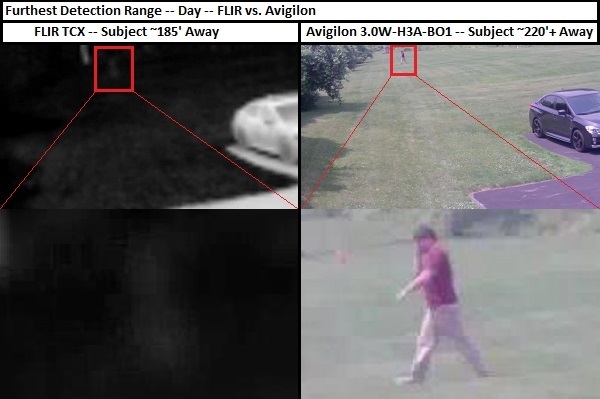 However, at night, TCX detection range remained about the same, while Avigilon's dropped significantly. In a ~3 lux scene with IR on, the 3.0W-H3A-BO1 was only able to detection our subject reliably at ~85'/~42' HFOV. 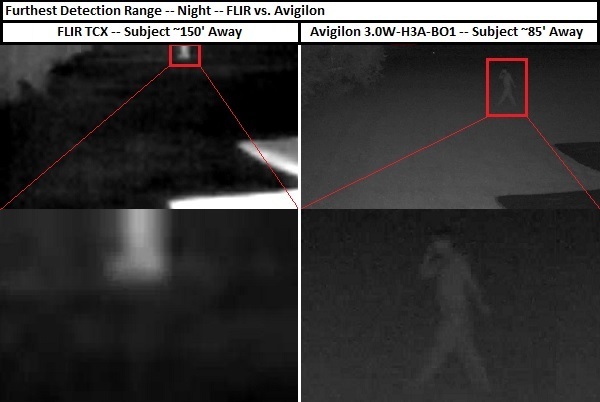 Firmware versions used for this test:

FLIR Launches Saros on May 01, 2018
Has FLIR solved the video intrusion / remote monitoring problem or have they...
Comments (27) : Subscribers only. Login. or Join.