Though FLIR has killed the DVTel brand, they are aggressively moving the VMS forward. This is a major shift for FLIR, who historically has been a leader in thermal cameras and, more recently, expanding into lower end cameras / kits (via Lorex).

However, until now, FLIR has never had an enterprise VMS to pull together an end-to-end solution.

In this report, we share our test finding of FLIR's Latitude VMS, examining its strengths and weaknesses in great detail.

On the plus side, FLIR offered 3 features not commonly found in VMSes, including screen recording, image stitching and advanced mobile phone streaming.

On the negative side, FLIR's setup is (unnecessarily) complex and may be daunting for inexperienced or infrequent users without training. Additionally, everyday operations may be more difficult for inexperienced users as the client presents many UI elements to the user by default.

Here are a number of specific limitations that we cover inside the report, summarized:

Compared to our previous test of Latitude's 6.0 version, version 7 is more stable and did not experience the resource issues, even with just 1 or 2 issues, seen in that test. Note, in this test, we used 8 cameras (including 4MP, 5MP, or 4K), about 40 Mb/s total throughput at any given time. We did not test Latitude's scale.

Also note that many of our findings (setup complexity, novel advanced features, etc.) remain similar to the 2010 version.

There are three tiers of Latitude VMS:

Live viewing in Latitude is similar to many VMSes, with the typical navigation tree on the left/camera panes on the right layout. However, there are some key points to note:

Note that this client allows users to view video from not only Latitude, but Horizon and Meridian NVRs, as well. All three recorder types may be viewed simultaneously.

We review live monitoring in this video:

Latitude includes an event and alarm list in the client, displaying events as they occur (and pushing video to armed tiles). This is similar to some VMSes, such as Genetec, though others do not include any event management functionality or require separate clients to monitor events.

Latitude allows users to playback and export multiple cameras simultaneously, with a standalone player executable (actually a compact version of Control Center). Users simply select cameras in their query and push the "sync" button to launch a new synchronized playback tab. Note that multiple clips may be played back in a layout unsynchronized, as well, simply by dragging and dropping the desired clip into a viewing pane.

Adaptive Streaming On DVTel Cameras Only

Configuration of Latitude may seem more complex to many users, with numerous available server roles, settings spread across multiple tabs for each camera, multiple views (physical, logical, servers, etc.) of the same system data, and more. Additionally, DVTel uses some confusing terminology, with schedules referred to as "coverage" instead.

These issues may make configuring a Latitude system difficult for users who have not been trained or who do not frequently administer the system.

We discuss these issues in this video:

DVTel supports a limited number of manufacturers (Axis, Sony, Panasonic, FLIR, DVTel, etc.) via direct drivers, with others supported via ONVIF, as shown in their supported devices list [link no longer available]. ONVIF integration complexity varies, with some cameras supporting I/O, audio, and even camera motion detection via ONVIF, while others may support only streaming video.

We review device discovery in this video:

The TruWitness mobile app allows users to send video from iOS/Android devices to Latitude Control Center. This feature was simple to set up in our tests, essentially just needing to be switched on and mobile video allowed. Once enabled, users log in to the TruWitness app (a free download) and may send video or video with an alarm: 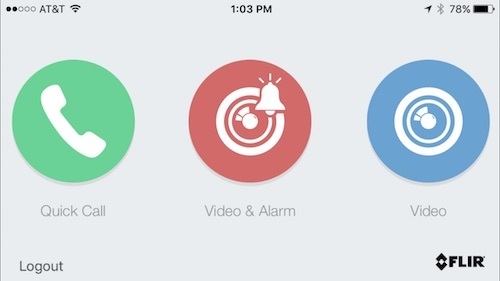 This video is displayed in Control Center along with their real time GPS location, which may be displayed on a GIS map. Users may also search a specific area of a GIS map to see all video/alarms which were sent from that area.

We review these features in this video:

Note that TruWitness requires that the Latitude Gateway server be connected to the internet if 3G/4G mobile use is desired. Manual port forwarding is required. No cloud setup is available.

SceneTracker allows users to stitch multiple cameras into a single view, intended to make tracking subjects across a wide area simpler than keeping cameras in separate views. Up to eight cameras may be stitched together, with up to three repositionable digital zoom windows possible in each SceneTracker view.

Setup can be moderately time consuming, requiring users to select multiple points in each camera's FOV which are then matched to the other camera or cameras in the layout. At times in our tests, stitching did not function properly, with images stretched or warped out of proportion. These issues could be remedied by removing the problem point and re-adding a new one, but added additional time.

Once configured, the SceneTracker view may be added to a layout as any other camera, either full screen or split screen, and used for live and playback as seen in the video below. Users should note that SceneTracker does consumer extra CPU compared to simply viewing its composing cameras, also discussed in this video.

Latitude includes a screen recording application called Mentor, which allows users to view all or part of a given PC's desktop. This may be used to record operator actions for auditing or training purposes.

Note that few VMSes include screen recording like Mentor as a built in feature, with most requiring additional software plugins or hardware.

Directory Of 120 Video Management Software (VMS) Suppliers on Aug 30, 2018
This directory provides a list of Video Management Software providers to help...
DeskCamera ONVIF Screen Capture on Jan 05, 2017
Recording PC screens have historically been an expensive proposition,...
FLIR Expands Enterprise Distribution Through ADI on Aug 22, 2016
FLIR and Hikvision have been the two top-stocked video brands at ADI,...
Comments (12) : Subscribers only. Login. or Join.