Hikvision is well known for being a low cost leader, but our recent Camera Price Comparison Report showed an unexpected challenge from FLIR, one of Dahua's top OEMs, and one of ADI's favorite vendors.

We tested these models against Hikvision to see how they stack up in day, night, and WDR image quality, bandwidth, and other features.

Though FLIR's models offer slight to moderate price advantages over main low cost rival Hikvision, these cost savings come with some disadvantages. Daytime and nighttime image quality were slightly worse than Hikvision models in our tests, and Hikvision has significant bandwidth/storage advantages over FLIR in all scenes tested due to their recent addition of the H.264+ smart CODEC (see our test).

Additionally, FLIR includes some quirks or missing features not present in other cameras, ranging from problematic (no automatic disabling of WDR at night) to annoyance (such as requiring software to change I-frame interval). These issues require workarounds or extra configuration not found in other models.

The N437VEW is similar in size and features to other IP66 rated outdoor domes. Notably, the camera includes a zoom/focus control on the camera itself, so users may easily adjust these settings with a test monitor or laptop without needing to access the web interface. While other cameras include this, as well, we found the 437's larger joystick more responsive and easier to use.

The N133BD is similar to other compact bullet models, in size and features. The image below compares its size to the Hikvision 2022, which it is only slightly larger than. 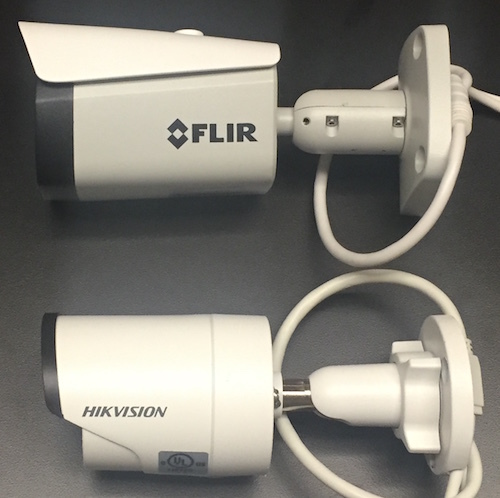 The FLIR web interface will look very familiar to those used to Dahua IP cameras (or their OEMs), even down to the color scheme.

However, in one strange omission, users cannot adjust I-frame interval from the web interface, and in both models this value was fixed at 60 (6 seconds between I-frames at 10 FPS). The FLIR Cloud Client (below) must be used to change these options.

Also note that the 437's WDR is either always on or always off, with no option to automatically turn it off when the camera switches to night mode. Users may turn WDR using a nighttime profile, but this requires manual configuration, not necessary in other models.

We provide a brief overview of the Cloud client in this video:

During the day, the 437 performs similarly to other models tested, though with slightly more digital noise around our subject's features, though he remains easily recognizable. The test chart is slightly more legible than the Hikvision 4132, which is overexposed past line 5, though slightly less legible than the Axis Q1615, evenly exposed down to the bottom line. 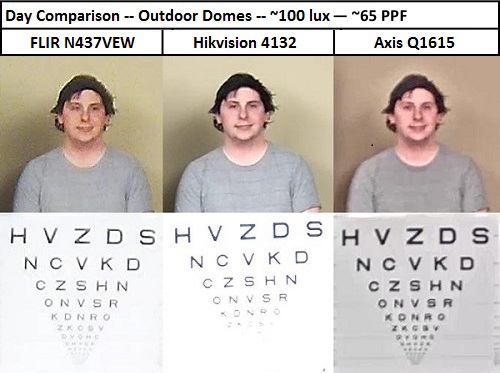 Users may also create day and night profiles to switch WDR on and off, with the camera switching between the two based on a schedule. See our Trend: Day/Night Profiles for IP Cameras report for more information. 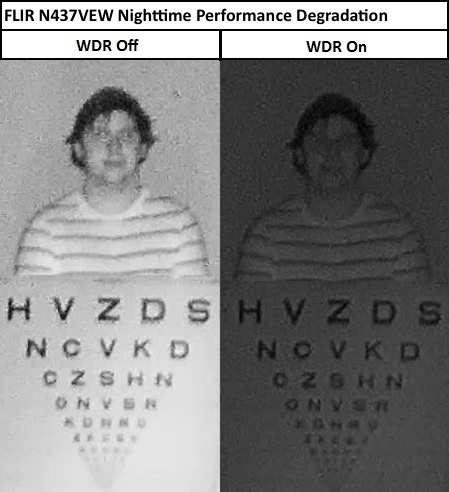 With IR turned off, the N437VEW performs similarly to the Hikvision 4132, with the subject evenly exposed. However, visible noise is moderately more noticeable in the 437, reducing details slightly. The Axis Q1615 is omitted here as it lacks integrated IR. 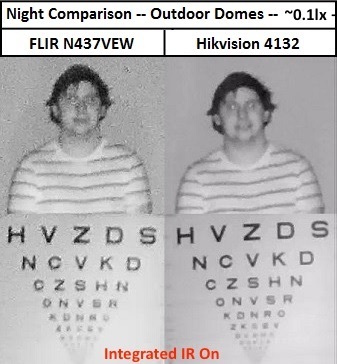 The FLIR N437VEW produced slightly less detail of our test subject than the Hikvision and Axis cameras in both light and dark areas of the scene. Details are still solid against the outdoor scene, but weaker in the dark area beside the door. 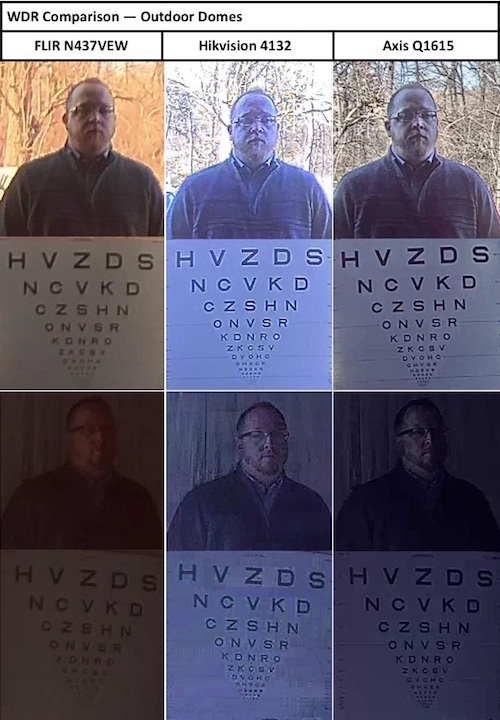 In full light, the N133BD performed similarly to the other low cost models tested. All three cameras provided roughly similar details of the subject, and chart legibility down to line 5. 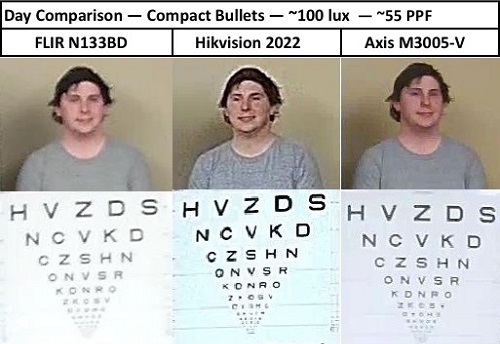 At night, the N133BD suffered from increased digital noise compared to the Hikvision 2022, with slightly worse details of the test subject and chart. The Axis M3005-V was unusable at this light level. 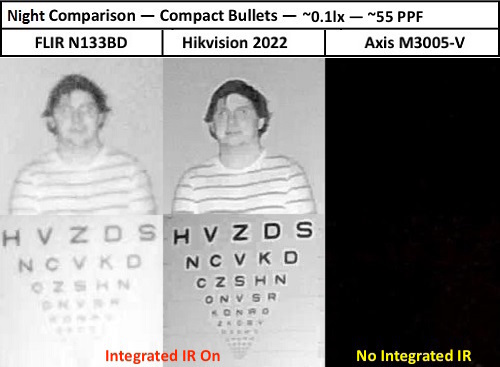 The N133BD does not include true WDR, only digital "WDR"/contrast adjustment; nor does the Axis M3005-V. However, the Hikvision 2022 uses true multi-exposure WDR, like its higher resolution counterpart (see our 4MP Shootout).

Because of this, the Hikvision 2022 outperforms both FLIR and AXis, with better details of our subject against the bright backlight of the open overhead door, and visibility of the chart and subject in the dark area beside the door. The FLIR camera is moderately better than the Axis M3005, which produces no usable images of the subject in the dark area of the scene. 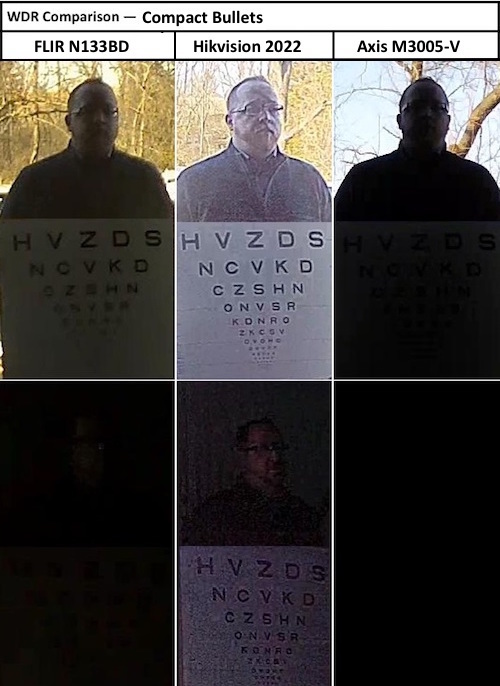 Compared to the other outdoor dome models tested, the N437VEW's bitrates were much higher, as it lacks smart CODECs found in competitive models from Hikvision and Axis. For example, using H.264, 10 FPS, and quantization around 28, the N437VEW's bitrate was over 6x that of the Hikvision 3MP model during the day, and over 4x at night. 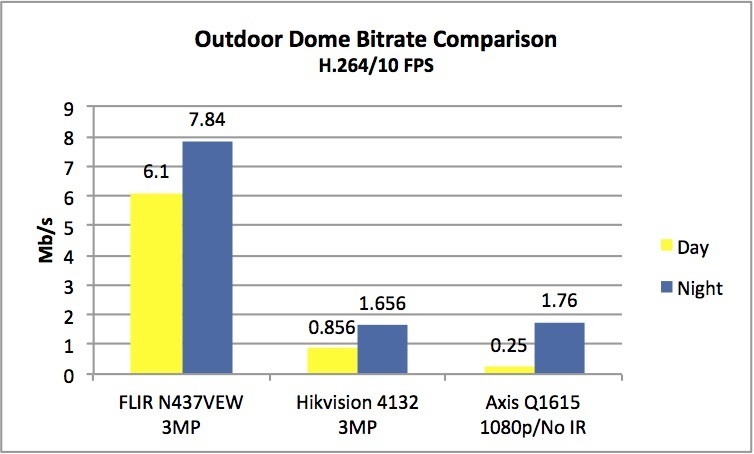 Bitrates of the FLIR N133BD were also significantly higher than the Hikvision 2022 with H.264+. The N133BD was only slightly higher than the Axis M3005-V during the day, though the M3005's nighttime bandwidth dropped at night as it produced no usable image. 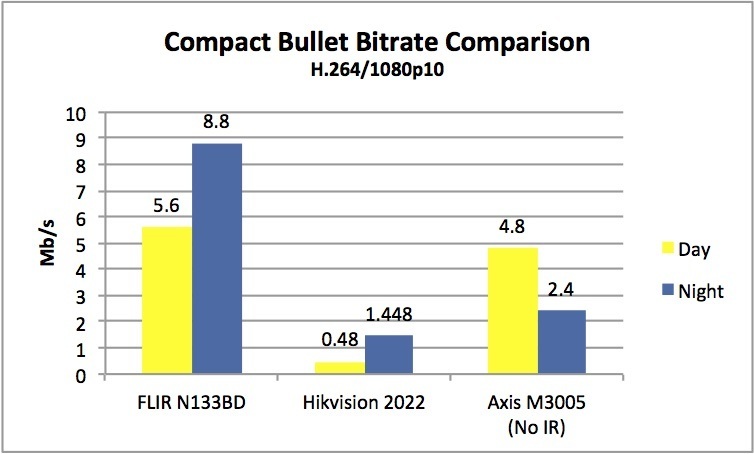 Bosch Divar NVR Tested vs Dahua on Oct 05, 2017
Bosch has a partnership with Dahua. But what type of partnership is it? How...
Comments (3) : Subscribers only. Login. or Join.