Monitoring criminal hotspots, where graffiti, drug transactions, and dumping are taking place is a common need of municipalities. However, this can be challenging as criminals often target areas where lighting is poor, and infrastructure may not exist.

One offering, the Q-Star FlashCam, is gaining traction, with multiple [link no longer available] news releases [link no longer available] highlighting its use. While the FlashCam does solve the issue of infrastructure, however, it presents an additional set of critical drawbacks. In this note, we look at these issues, compare to other solutions, and provide our recommendations for alternative solutions.

The FlashCam system consists of a vandal-resistant outdoor enclosure equipped with the following:

Two models of FlashCam are available, the 880k and 770k. Both models share all of the above features, though the 880k features wireless (Wi-Fi only) download capability, where users of the 770k must retrieve files from the camera itself. Dummy cameras are also available, using the same enclosure as the FlashCam, without any electronics. Q-Star recommends users move the real FlashCam to another area once incidents have stopped at the current location, and put a dummy camera in its place to deter further occurances.

Pricing for the FlashCam ranges from just over $5,000 for the 770k to $6,000 for the 880k via the GSA schedule. With municipalities being a target market for Q-Star, and likely their biggest vertical market, we expect the GSA schedule is used often.

Here's what it looks like - a big square box: 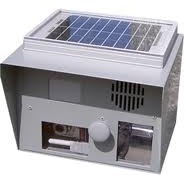 Advantages to this Approach

The main advantage of the FlashCam is that it requires no infrastructure to run. Users mount the camera in the desired location, which requires no power or network connectivity. This saves the expense of installing power and data at each location. Depending upon the location, installing AC power may run well into the thousands of dollars. Additionally, the camera's 12MP resolution is far greater than the great majority of IP HD cameras, which theoretically could provide more usable image captures at greater ranges.

For its advantages, however, the FlashCam does have drawbacks relative to typical surveillance cameras, which may be critical to some users:

We believe the key challenge for the FlashCam is the assumption that post-event still images will be sufficient for investigation and prosecution. With even high-resolution still photos in hand, authorities have little to go on in order to investigate a subject's identity, aside from posting these images, asking for the community's help in locating him or her. Even if a suspect can be found, we suspect many of these cameras are viewing too large an area to be used for evidentiary images.

For users seeking to add surveillance to areas where graffiti, dumping, or vandalism are an issue, but infrastructure may not exist, users are better off turning to system which offer real-time alerting capability, so that acts may be interrupted and criminals apprehended. Additionally, review of these alerts by a human operator greatly reduces the number of nuisance alarms generated. Authorized users may also be distinguished from unauthorized.

We see two products, both with their own advantages and disadvantages, which are reasonable alternatives in applications at which the FlashCam is targeted: