One offering, the Fike SigniFire IP camera [link no longer available], has a different design approach to detection than traditional photoelectric or heat sensors. The SigniFire uses a visual image to determine the presence of smoke or fire. In this note, we look at this camera and competitively compare it to other fire detection solutions.

The SigniFire [link no longer available] is a box format, indoor-rated camera equipped with the following:

Here is an image of the camera:

Pricing for the SigniFire is $3,000 USD list price per camera including lens.

The video below is an example of Fike's visual detection system in use:

The biggest advantage of this product is the multipurpose ability to detect both smoke or fire at distance in a single unit. Traditional detectors need to be hung close (within 30') to an ignition or smoke source in order to alarm, while video detection is able to alert to a fire even when the camera is hung a considerable (100 ft) distance away. The detection analytics are contained on board the camera, and the unit can be integrated into most fire alarm systems via the included dry contact outputs. While the camera has SD resolution that may result in poor surveillance quality, this resolution provides a very precise method of determining when and where smoke or fire has occurred compared to nonvisual sensors. For large, open facilities like warehouses, stadiums, hangars, or industrial plants, the video detection technology permits earlier alerting of an alarming condition than traditional sensor technology.

A number of drawbacks exist: 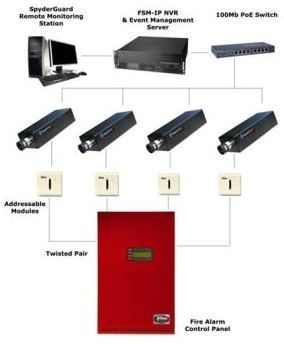 The pairing of fire and smoke detection with cameras is not uncommon, but other options have marked differences. Products like Vumii's EyeSec FD are considerably more expensive and intended for long-range outdoor applications only. Several products, including those from DTEC, are appliance (DVR) based analytics intended to be used with new or existing analog cameras. Because the analytics are sold in groups of channels, the overall cost per detection channel might be lower but the total acquisition cost is higher.

Other analytic products, like InnoSys [link no longer available] and ASL Vision, commonly only address a portion of the total equipment solution  and rely on quality of the associated camera for effectiveness. When implementing a system like the above, the performance of the system is greatly affected by the quality of the camera it is associated with. The integration of an alarm event into a fire panel remains a problem solved by purchasing the analytics installed onboard additional hardware modules.