Do your security measures help or hurt first responders?

The bulletin was created from an analysis of 12 (both successful and unsuccessful) attacks, including the Discovery hostage situation in 2010 and the Wisconsin Sikh temple shooting [link no longer available] in 2012.

The bulletin says agencies need to train for "scenarios to account for building security measures likely to be encountered" and that response plans may address using a building's CCTV for situational awareness and to assist with accountability and evacuation.

The bulletin is light on details and is likely part of a larger analysis, says a DHS official I spoke with.

"If they explicitly listed all the ways that someone could hinder first responders, [then] that would be worse if it was posted online," he said.

The bulletin, dated December 6, classified building security into three tiers (Open, Controlled, Restricted) that look to be based on level of access.

Open campuses characteristics are intrusion alarms, CCTV and key cards for after-hours access, but nothing that could physically stop first responders from entering.

Controlled campuses are labeled as commercial buildings or office buildings that require keycard access for entry, on-site security and a central mail room for packaging and screening.

Restricted access areas refers mainly to government buildings that have “strong restrictions” like armed guards, personnel screening, armed security and required photo ID for entry. These types of facilities are likely to have more physical barriers like bollards and standoff distance between the building and accessible roadways.

Here is the diagram that they include: 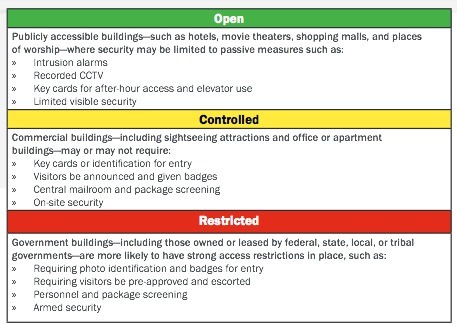 I contacted DHS and the FBI to learn more about the impetus for the bulletin, but neither agency will comment on “For Official Use Only” documents that get leaked to the public.

This leaked bulletin is likely just part of a larger analysis of these incidents, but what is worth noting from the part available is that after looking back on the 12 incidents, a common thread was found: In some way building security systems played such a role in changing how the authorities were able to respond. The impact was enough that DHS recommends adjusting security exercises to account for these systems. However, that are some provisions that already exist to address some of these:

For example, security measures like bollards and standoff distance mean a building has protection from car bombs and more time to respond to an incoming threat, however, police/paramedics/firefighters have to stage farther away as well. This concern could be addressed through removable or retractable bollards.

Firetrucks or ambulances will stage near loading docks or overhead doors when possible if there is going to be equipment moving in and out.

For access, products like Knox Boxes that are designed to assist first responders with rapid entry to a facility by providing keys or codes for access. Fire departments and emergency services will usually have a master key for the boxes in their jurisdictions. A 'master' access card is usually already issued to guard staff, and many systems allow you to unlock a door manually in the management software if needed.