Determining the right manufacturer to provide storage for your surveillance system is a fundamental, yet complicated choice. The choice significantly impacts cost, reliability and scalability of the overall system. However, there are many different types of storage to choose from and an incredible range of vendors, both from the general IT market and for surveillance specifically.

In this report, we share our survey results of 100 integrators internationally on what manufacturers they most prefer for providing surveillance storage. This is the question we asked them:

The breadth of potential options are vast:

Integrators cited 35 unique storage providers with 6 of those manufacturers standing out in the top grouping. Inside, we break down those specifics.

In some of the most fragmented results in our surveys so far, integrators answered with 35 unique responses to their favorite provider of storage for surveillance (contrast this with results from questions such as favorite camera or VMS, where leaders had much stronger showings.). These results varied from use of on-board storage provided by DVRs and NVRs, through NAS options, to large SAN systems. However, a few responses stood out. 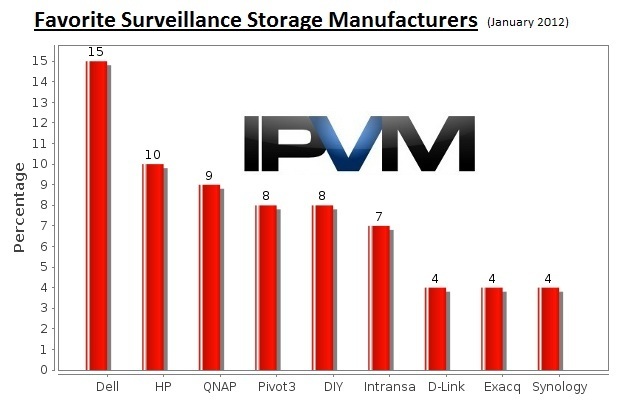 With Dell and HP garnering the highest percentages of responses, 15% and 10% respectively, standard, general IT storage products are still more often used in the surveillance industry, as opposed to surveillance-focused providers. A number of other non-surveillance focused providers, including NexSan, Promise, DDN, and EMC, were also represented, making up over 30% of responses. We suspect that this is due to these manufacturer's stability and reputations, as most have been recognized names in the storage industry for far longer than surveillance-centric options.

Some comments on these providers from respondents:

Behind the options above, typically SAN providers, manufacturers of inexpensive NAS units were the next most common response from integrators. QNAP led this category, with 9% of responses, followed by D-Link and Synology, both with 4%. Given their lower cost relative to SAN appliances, NASs are likely candidates for expanding smaller, more budget conscious surveillance systems. Many of these options also provide built-in basic video management for no additional charge, making them a simpler, and more cost effective choice for standalone SOHO/small business surveillance systems, as no server or VMS licenses are required.

After the NAS providers, surveillance-focused storage appliances were the next most preferred group, with Pivot3 gathering 8% of votes, and Intransa close behind with 7%. Given the large amounts of marketing money these two companies' pour into the surveillance industry, these are disappointing results. HP and Dell being more popular than Intransa and Pivot3 is not surprising despite their limited marketing, given their position in the IT industry and among consumers at large. For smaller, relatively unknown NAS providers, who likely spend little money on marketing, to be preferred by respondents, instead of these surveillance-focused manufacturers speaks to the confusion in the marketplace regarding their actual value proposition.

Here is what respondents had to say about Intransa and Pivot3:

On the negative side, however, multiple users cited issues with Intransa deployments, echoing some of the concerns raised in our review of Intransa vs. Dell:

Among integrators whose average deployment is 20 cameras or fewer, preference for NAS increases. The best example of this: 100% of respondents with a preference for QNAP and D-Link were from this segment. No other manufacturers were this strongly represented dependent on system size, with HP and Dell evenly distributed. Even Intransa and Pivot3, often mentioned as being less cost-effective than COTS options, were represented in responses from those installing an average of 20 cameras and under.

Obviously, some options mentioned by our respondents were more popular than others. However, it is extremely difficult to name a true favorite or best of in the category of storage, given the lack of consensus from our integrator respondents. Any number of additional factors also need to be considered, such as size, recording platform, manufacturer sales and support models, and more. Personal preference also carries weight in these favorites, with some integrators simply preferring one manufacturer's hardware or user interface to another.

That being said, Dell and HP seem to be reasonable choices for those seeking the "safe" option, as their names and support structures lend a certain credibility to their products, regardless of whether they are the lowest-cost or highest-performing choice. For those seeking less expensive NAS products, offerings from QNAP, D-Link, and Synology are likely the best starting points.

Video Surveillance Statistics Directory Vol 2 on Mar 18, 2012
In this report, we aggregate and present numerous statistics about how...
Comments : Members only. Login. or Join.