What are the favorite access control software platforms? Is it the elder incumbents like Honeywell, Lenel and Software House? Or can newer providers like Brivo, Genetec or S2 make a dent?

Just like we did with favorite IP cameras and favorite VMS software, in this report, we take the first ever look at integrator's preferred brands for access control.

No Clear Favorite or Top 3

Of the 85 responses, 36 vendors were selected by integrators. And, unlike most manufacturer integrator surveys, in this one, there was no clear top choice or even top 3. Here's what the distribution looked like: 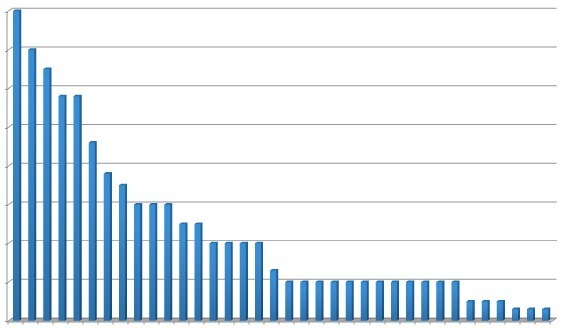 The 5 'top' manufacturers combined did not even receive 40% of the votes, showing that there is no dominant choice / favorite amongst integrator surveys.

The 5 with the highest votes received were:

Rounding out the top 10 were:

Our detailed analysis and integrator commentary follows in each section below.

Another clear favorite is S2, who integrators cited as a leading favorite because of IP-based controllers, web-based management, and products for both small systems and enterprise level deployments. Several integrators mentioned S2 is versatile enough to use for both enterprise or small systems.

While not flashy, RS2's reputation among our responders is simple installation, ease of use, and wide number of integrations with video, intrusion, and stand-alone lock vendors.

The US based company is best known for it's no-frills, straightforward platform that uses Mercury Security hardware and can be integrated directly with DMP's line of intrusion panels.

While a UK company, Paxton had a significant number of votes from outside Europe, including US integrators. Most recognized as an IP-based system, integrator responses claimed system integration options, low cost, and license-free software as advantages over other systems.

An 'older name' in Access, best known for it's serial based controller architecture, the brand's wide, unrestricted availability in national distribution and competitive pricing make it popular among US integrators especially:

Another huge multinational brand, Lenel's reputation for strong technical support, broad integrations, and enterprise stability make it prominent among it's VAR base:

Surprisingly, Lenel did not receive the number of 'favorite' mentions of other major brands, although the platform was frequently cited as the major competitor of other systems, including:

Another Tyco product, Kantech is an established platform with a large group of installing dealers. With limited, but simple integrations (including Exacq for video), the line is most popular among integrators reporting small average system deployments, leaving large enterprise systems to Software House.

While Honeywell offers a number of access control products, the most popular among them is not the venerable Pro-Watch platform, but the small business platform often installed as expansion modules into VISTA intrusion panels were mentioned as one of the most favored platforms:

Rounding out the Top 10, Avigilon Access is a favorite among the brand's dealer channel, who cited simple pricing, third-party controller compatibility, and no software maintenance as keys to the line's popularity:

When Avigilon bought RedCloud, it was a little-known platform with tiny revenue and minimal market share. Clearly, the loyal Avigilon dealer base has already started to respond to this added offering.

Many integrators have more than one preference for access, with multiple platforms depending on job size and level of integration needed with other systems.

Another ~35 brands or platforms received at least a token mention. Among those were access incumbent brands AMAG, Stanley, and DSX, who despite substantial dealer channels were not cited enough to break the top 10.

Favorite Products on Aug 01, 2020
Security integrators periodically report on their favorite and worst products...
Favorite Access Control Manufacturers 2016 on Oct 25, 2016
Integrators told us "What is your favorite access control management...
Worst Access Products 2015 on Feb 18, 2015
100 integrators told us which access product lines gave them the biggest...
Access Interoperability: Going Nowhere on Nov 11, 2014
The dream was simple: access control interoperability.  You know; the ability...
Best Manufacturer Support 2014 on Jul 28, 2014
Integrators told us who the best and worst manufacturers are at providing...
Comments (22) : Subscribers only. Login. or Join.