Reusing existing coax for IP cameras can cut installation costs dramatically. However, there are endless numbers of Ethernet over coax adapters available, all with differing price points and feature sets, so choosing the right ones can be daunting.

To find out what works best in EoC applications, we bought five models of popular Ethernet over coax adapters, including: 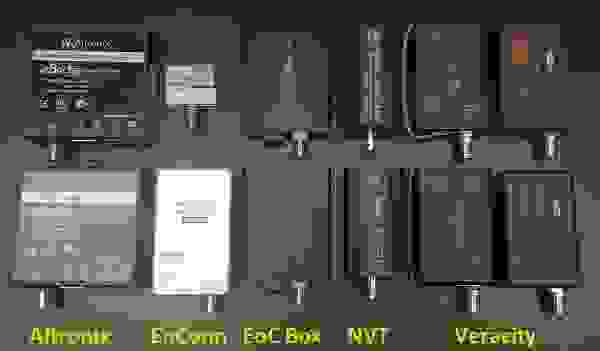 Testing each in these key areas:

This chart sums up the comparitive performance of tested EoC adapters in key areas:

Note: the EnConn Mini-Power's throughput could not be tested like other cameras (see our tests below), but operated only in 10 Mb/s mode at 1000'.

All EoC adapters tested were able to connect and stream a single camera reliably at up to ~1,000' using RG-59, longer than the vast majority of analog camera runs they would replace. Additionally, all units (besides EnConn) were able to achieve speeds over 50 Mb/s (up to 85 Mb/s) at these ranges, more than enough for a single or even multiple cameras.

Because of these factors, the main considerations in most EoC updgrades become price and required featureset:

Based on our tests, we do not recommend Veracity's older generation HighWire units, as they have simply been outmoded by the newer PowerStar model, which adds PoE up the coax, PoE pass through, and advanced troubleshooting LEDs at a moderately lower price.

Additionally, while the EnConn Mini-Power was priced second lowest and worked reliably at short ranges, it's limited bandwidth (10 Mb/s instead of 100) and range (1,000' max) make it the most limited of all units tested. Further, it may not be used with non-PoE devices (such as PTZs using low voltage power), and limitation no other adapter had.

Regardless of which adapter is selected, we strongly recommend testing the model in place with the switch/midspan and camera model to be used. Due to variations in cable quality and the potential (albeit limited) for power issues at the far end, this testing may relieve potential unexpected issues.

EoC adapter pricing varies depending on features, with the EoC Box lowest cost at about $70 per pair (not including 12VDC power), though this model does not pass or supply PoE and requires local power at both ends. Units with more advanced features such as Veracity's PowerStar adapters which include status/troubleshooting LEDs or NVT's 4:1 multiple-camera connectivity, are higher in price.

PoE Up The Coax vs. Local Power

Of the five units tested, three support PoE power up the coax, requiring no power supply at the camera end:

Neither the EoC Box nor the older Veracity HighWire support PoE up the coax, requiring low voltage power at both ends of the cable run.

In order to test functional range, we connected each set of EoC adapters at either end of an RG-59 (20 AWG) coax run, from 500' to 2,000'. We then used this link to connect a camera and VMS to see if the camera could connect and stream (pass) or no link was made (fail).

Only the EoC Box and NVT units functioned at 2,000'. The Altronix eBridge worked without issue up to 1,500', but failed beyond, either dropping significant amounts of packets or simply not connecting. Both Veracity units functioned at up to 1,000', but not beyond.

Note that while performance varied, no manufacturer overstated their maximum range, listed below. Maximum range specs varied widely, from ~1,100' using Veracity to a whopping ~8,000' using the NVT EC1700E. All specs below use RG-59:

While the EoC adapters functioned at the ranged listed above for the majority of cameras, we did encounter occasional issues in testing, where some cameras did not power up at certain ranges or at all. For example:

According to manufacturers we spoke to, this is likely due to improper or malfunctioning PoE circuitry requesting more power than is truly available, with no fix other than using local power for the camera.

Because of these issues, we strongly recommend testing your chosen combination of PoE switch/midspan, EoC adapters, and camera on the actual run of coax to be used, as bench testing short lengths may not reveal these issues.

Next, we tested the maximum throughput of each unit at distances up to 2,000' (where applicable) using Iperf, a tool which transmits actual packets between two computers to measure throughput, shown here:

The two Veracity units and Altronix eBridge achieved the fastest speeds in our throughput tests, all 80 Mb/s or higher, while NVT and the EoC Box were lower, ~50/60 Mb/s respectively at short distances, with NVT dropping to ~47 Mb/s at 2,000'.

Most of the EoC adapters tested are approximately the same size, about 1.5" x 3". Notably larger is the Altronix eBridge Plus, about a 3.5" square, while the base unit of the EnConn Mini-Power is smallest, only about 1.5" square. The adapters are shown side by side in this image: 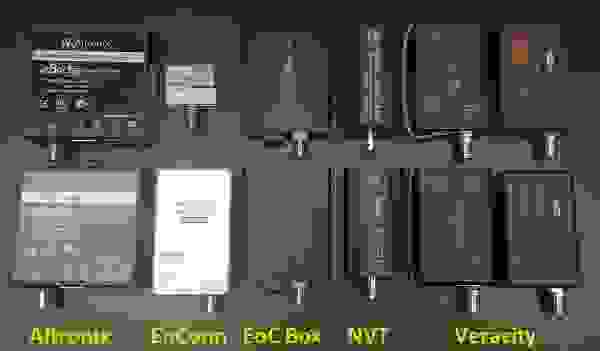 The Altronix eBridge Plus, EnConn Mini-Power, EoC Box, and Veracity HighWire PoE included no advanced features, simply converting Ethernet to coax and back with basic status lights, if anything.

However, the NVT NV-EC1701 and HighWire PowerStar both include features not found in other adapters

The NV-EC1701 includes the ability to connect up to 4 transceiver to a single base unit, i.e, four cameras to one receiver. This is accomplished using a 4:1 BNC splitter, sold individually or as part of a 16 channel rack mount (below). Other adapters are 1:1 only. 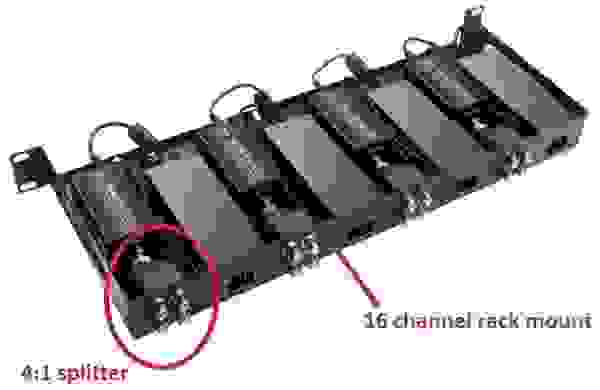 The HighWire PowerStar includes status and troubleshooting LEDs not found on any of the other adapters tested. These LEDs show link status for the coax connection, Ethernet status at both base and camera end, and maximum PoE wattage available at the far end. 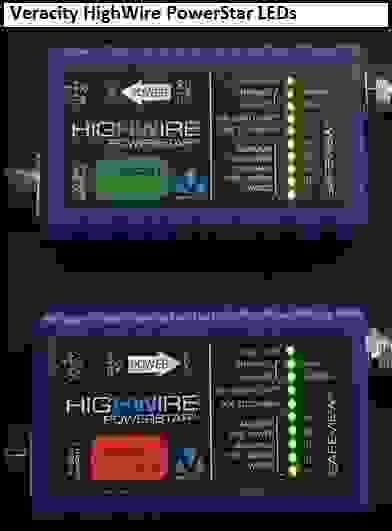 In addition to these LEDs, the PowerStar offers the most flexible options for power in our tests, either passing 802.3af/at PoE from a midspan or switch or powered locally via 44-57VDC at either one or both ends. Others supported local power or PoE pass through, not both.

IP Network Hardware for Surveillance Guide on Dec 27, 2021
IP networking equipment is critical to an effective video surveillance...
HD Analog vs IP Guide on Jul 16, 2019
For years, HD resolution and single cable signal/power were IP camera...
Powerline Networking For Video Surveillance Advocated By Comtrend on Jun 08, 2018
Powerline networking, using existing electrical wiring, has been around for...
Comments (68) : Subscribers only. Login. or Join.