The most popular consumer camera has suddenly become one of the most hated.

In this note, we examine the four main complaints and what this means for the consumer market.

Dropcam first came to market ~5 years ago in 2010, using an Axis cube camera. However, it was not until 2012, when they launched their own HD camera, that they really started to take off. And Dropcam quickly gained rave reviews, across the Internet and on Amazon. Combined with major funding and massive marketing, it lead to a $555 million buyout from Google / Nest.

Now, the first new 'Dropcam', post-Google acquisition, has been released. The Dropcam brand was killed, replaced with 'Nest Cam'. As our Nest Cam test results showed, the 'new' camera is 90%+ like the old camera, with the biggest improvement being enhanced analytics and secondarily 1080p max instead of 720p.

Indeed, the most recent customer reviews show a string of angry customers: 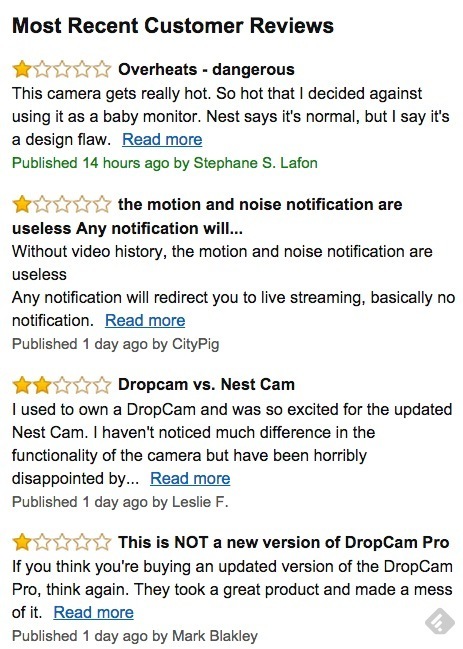 Google is famous for its scheming to never let customers speak to a Google employee. Nest evidently is not much better:

Many complained about Google / Nest trying to more tightly integrate / depend on their other products.

Worse, many of their most loyal customers, who had been buying Dropcams for the past few years are angry and upset, due to a combination of the degraded support, lost features and issues migrating:

Though this is not fundamentally new with the Nest Cam, the complaints about having to pay to get alerts or recorded video look to be building:

Indeed, the Nest Cam hardware itself costs ~$199 USD, which is at the high end of the market for consumer cube IP cameras.

Google / Nest's poor service and desire to more tightly integrate it into the Google ecosystem have clearly killed the momentum of the former consumer favorite.

Moreover, the rest of the market is catching up and now there are numerous options that provide similar setup / access to Nest Cam at similar price points.

On the plus side for Google / Nest Cam, none of these companies have really delivered a great solution so far, but none of this is rocket science. Plus, since this is a large and growing market where rivals can take advantage of SD card recording to reduce or eliminate recurring costs, means the consumer IP camera market is wide open now.

Dropcam and Nest CEOs Fight, Alarm System Coming on Mar 24, 2016
The Information, a subscriber only Silicon Valley technology site,...
Angelcam Cloud Video Tested on Oct 13, 2015
With the cloud getting more and more hype plus with early market leader...
Comments (29) : Subscribers only. Login. or Join.