Drones are all over the press, both good and bad, for their use around the world. Given their surveillance abilities, it would seem a natural fit for physical security. However, so far, this is not happening.

We went to the annual AUVSI 'drone' trade show, and learned about integrating drones into physical security and the keys to a good aerial video platform. The key findings we explain inside are:

They Aren't Legal for Private Companies to Fly in the U.S. Yet

"In the United States, companies can't yet fly the systems, so they can’t be incorporated into security systems," said AUVSI spokeswoman Melanie Hinton. Law enforcement and public entities can get a permit from the FAA to fly drones. Even then, they have to be 25 pounds or less, are limited to flying 400 feet or lower and must remain in line-of-sight of the operator.

The line-of-sight requirement is because most unmanned systems lack sense-and-avoid technology that would help them avoid collisions if flying in the same airspace as manned aircraft. Here's an online video demo of what sense-and-avoid looks like:

The FAA's drone permit is not available to commercial entities. However, the FAA has approved two specific models of UAVs (Puma and ScanEagle) for commercial use. "A private company that seeks to fly an unmanned aircraft in unrestricted airspace must obtain a special airworthiness certificate from the agency," reports AINonline. Energy company ConocoPhillips is the only company that had been approved so far and will be using ScanEagle to do ice surveys, wildlife surveillance and oil spill monitoring in remote areas.

Drones used by the Department of Defense use jet engines. They can fly for hours, sometimes days. The small drones that law enforcement are using run on batteries. "The small, battery-powered systems typically don’t have the endurance required for extended surveillance of small areas. The systems that do have the endurance are generally more useful for monitoring large areas, such as crops or national parks," Hinton said.

"Larger vehicles are still cost prohibitive for surveillance of a site," said the senior engineer of a company that makes unmanned helicopters. "You don't really need highly trained operators for static PTZs. You have a lot more consumables and higher trained personnel with unmanned vehicles." One unmanned helicopter and support staff could cost as much a whole surveillance system.

Areas where UAVs could win out over traditional security would be surveilling remote locations. "We think these would be more cost effective in things like monitoring pipeline or telephone line surveillance, places where it's not always easy to put up cameras or have people going out to check." Still, situations like these may need larger more expensive UAVs that have the endurance to travel to remote sites and back.

An engineer with another company that also produces unmanned helicopters says it is unlikely unmanned systems and video surveillance systems will be integrated anytime soon because their vastly different roles and cost of equipment. Surveillance systems are used to collect evidence to use later, he said, but much of the worth of a UAV comes from being able to get high quality images live and provide surveillance in places where surveillance does not already exist.

For smaller systems being eyed by local law enforcement, the cost per system starts at around $10,000 and in most cases these can be made to order based on what kind of communications set up and cameras an agency wants to use. The cost per hour for unmanned systems is $25-75 per hour. The cost per hour to operate a manned aircraft is around $200-$400.

Here is a model of quadracopter, the most common type of UAV, from Microdrones. These start out at around $10,000: 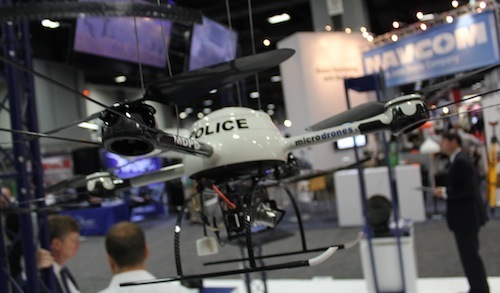 However, companies are popping up all over the Internet and at trade shows with bargain prices. A lot of these are just beefed up RC systems. See below: 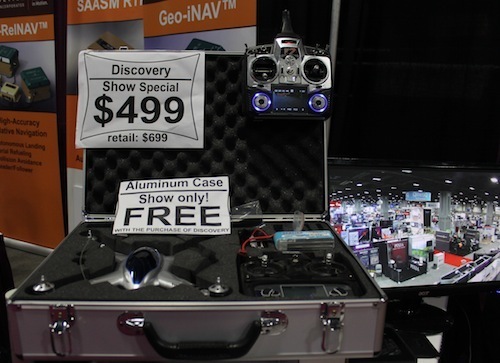 Camera Stabilization is Key to A Good System

"The development of the stabilized gimbal is really the key to us," the same engineer said. "You can have a camera that does everything but if you shake the heck out of it, it's not going to be that great. Camera stabilization right now is a bigger concern than just camera technology. If you take that a step further, mechanical stabilization is very important. You can't always have hi-tech video stabilization on board. That high level of processing isn't available on at lot of the payloads today."

Below is a gimbal made to stabilize point-and-shoot cameras. The photo on the right shows where a camera would be mounted on a larger helicopter UAV.

Some of the more common proposed applications:

More companies at the show were marketing for agriculture than I have seen before. Said one exhibitor, “This is something farmers have already being doing for years with their own planes or with RC planes. We’re giving them more capability than an RC with less the hassle and cost of owning a plane.”

Drones are already being used for perimeter security in some countries. They can be used to watch areas where guards are unable to go and supplement areas lacking surveillance cameras. Drones used in this application can be set to follow a pre-planned route, and can be watched lived or the video retrieved later depending on what an organization is using to capture footage. The quadracopters produced by Microdrones can be customized to mount a variety of cameras including point-and-shoots, GoPros and DSLRs.

Less Government at the Show

It seems that predictions on sequester having an impact on trade shows [link no longer available] may have come into play at this year’s show. Part of sequestration included limiting travel for government employees. One thing that seemed to be missing in the exhibit hall this year was a heavy presence government employees. "Sequestration did play a role in some of our government vendors not having a presence this year," the AUVSI spokeswoman said.

Another interesting thing about this show was that state government’s bought booths to try and attract drone manufacturers to their areas in hopes of benefitting off the drone boom that comes when the FAA gets all its stuff cleared up. Ohio estimates the economic impact on the state could reach $264 million annually [link no longer available]. There are more than 50 applicants from 37 states hoping to be selected for drone test sites. The FAA Is hoping to select six sites by 2014. From what I heard around the show floor, Oklahoma is a shoe in.

Every year a number of new companies spring up in the small drone space. According to AVUSI numbers, there were around 50 more exhibitors (550) at the show than last year and more than 100 since the show in 2011. If/when drones get approved to fly commercially in the U.S. there will be tons of companies waiting to put their products on the market. A key factor will be what companies are weeded out and which survive over the next few years as lawmakers go back  [link no longer available]and forth about what to do with them. Moreover, it will be interesting to see not only how they are integrated in the airspace, but how they are integrated into the security industry in general. Will drone integrations become an offering alongside video surveillance, intrusion detection and access control?