The plan to merge two second-tier door hardware and access control companies may give birth to a new giant. Europe-based Dorma and Kaba plan to join forces and instantly challenge the scope and depth of the biggest incumbents in the market.

What does this announcement mean for the global locks and access market? We analyze the deal in this note.

The new company will be called simply "dorma+kaba", evidently lower cased and with no spaces.

In the investor presentation for the deal, total revenues for the merged companies is listed over $2 Billion USD. This places the newly formed 'dorma+kaba' group as the #3 highest grossing door hardware and physical access control manufacturer worldwide. 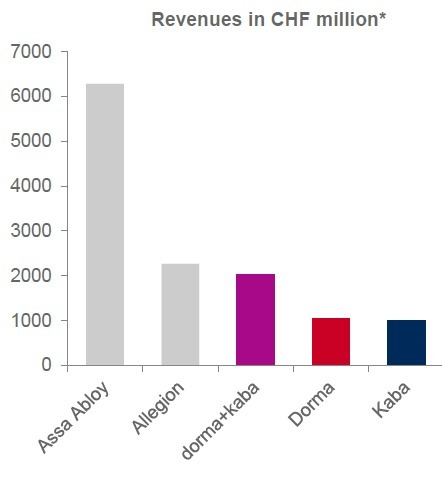 That's not an especially high valuation, however, it reflects the low growth rate overall for both companies historically as shown in this 10-year chart:

Indeed, even going forward, the combined company is only targeting future annual growth in the 6-7% range.

Individually, the companies had roughly the same annual revenue (~1 billion euros) and gross margins in the low to mid 40s.

Both companies are well established in the market, with German based Dorma and Swiss-based Kaba both old companies, claiming more than a century in business each. In terms of the North American market, Dorma is a relative 'newcomer' with less than 20 years of maturity while Kaba claims over fifty.

Here is a breakdown of their regional sales: 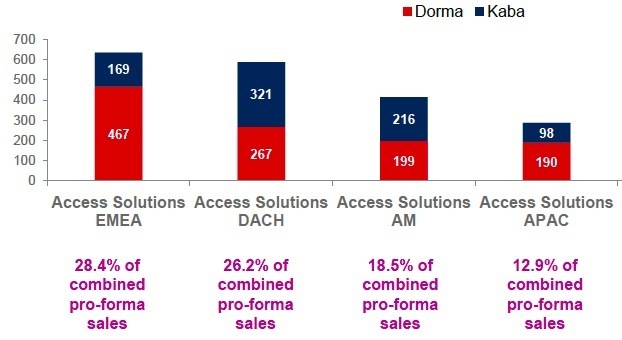 In general, the market focus of the companies have differed:

Together both companies are more relevant to buyers seeking end-to-end solutions. For example, while Dorma has been weak in electronic access, Kaba has strength, recently enhancing offerings by purchasing Keyscan (access control) and RCI (electrified locks and accessories).

The scope of the product portfolio essentially means a 'dorma+kaba' dealer will be able to bid on many of the same packages that previously were only options for Assa or Allegion houses.

However, the deal does not guarantee success. In contrast to Assa and Allegion, the combined 'dorma+kaba' group will still have a more shallow pool of A&E Spec Writers. In the contract hardware market, the debatable practice of manufacturers writing bid specifications is one of the primary methods of winning business.

Historically, Assa and Allegion dealers have essentially competed against only each other. This merger could signal the entrance of another big player.

While those incumbent dealers have benefitted from strict regional sales territory restrictions, both Dorma and Kaba are more liberal with opening new dealers. The merger could precipitate the propagation of a bigger sales channel for both companies than they could achieve separately.