Domes are the most popular overall type of surveillance camera but two main types of domes exist: the 'mini' and 'full size versions:

What are used more? Why? When?

In this note, we share exclusive IPVM integrator survey results that answer these questions.

Integrators use full size domes more than they use minidomes. 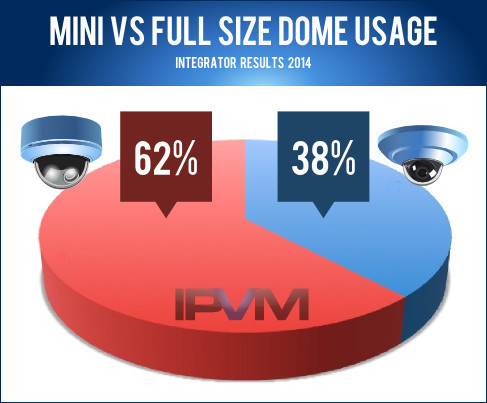 However, minidomes were not that far behind. Indeed, quite a number of integrators use minidomes at least half of the times they choose domes: 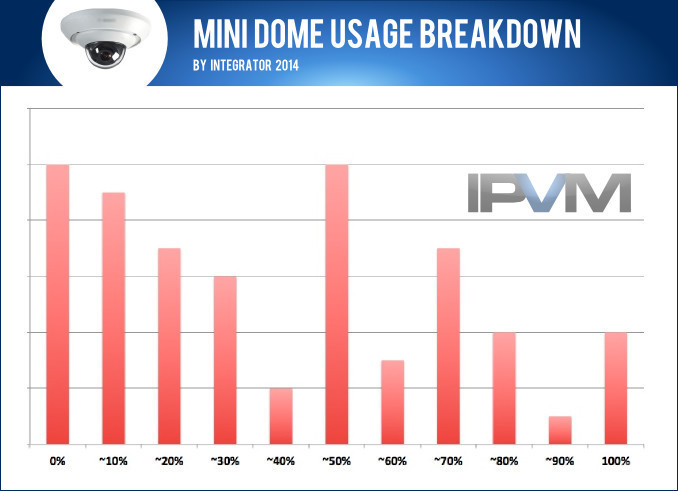 The two main drivers for using minidomes are lower cost and better aesthetics, as multiple integrators emphasized these themes:

The aesthetics aspect is especially important to many users who want to minimize the impact / overtness of cameras for their customers and/or employees.

By contrast, the theme for full size domes was getting more advanced features, with integrators noting that:

The lack of varifocal was the most common complaint against minidomes and driver for full sized domes, with comments including:

Other feature sets, including image quality ones were noted:

The lack of outdoor rating for minidomes also was called out as a driver for full sized domes:

And a few noted installation limitations for minidomes:

These limitations noted, IPVM believe minidome use has been on the rise and will continue to do so, simply because more and more suppliers have enhanced their minidome offerings over the past 3 years.

Indeed, a number of integrators see their minidome use rising:

Testing Varifocal Minidome (IQeye) on Jul 02, 2014
Minidomes are increasing in popularity, as IPVM statistics show. However, the...
Comments (0) : Subscribers only. Login. or Join.