Few markets are as technologically stagnant as PERS, or Personal Emergency Response Systems, yet with mobile technology advancing and increasingly aging populations, an opportunity for major disruption exists. A startup named Amulyte has attracted strong backers positioning the company to raise millions. Does the company indeed have a winning, market changing product? In this note we examine Amulyte and contrast it with existing offerings.

Amulyte is backed by Y Combinator (YC), the most respected Silicon Valley incubator known for selecting top technical teams. While YC backing is no guarantee of success, the investment company has many backed many winners, and has a powerful network of investors / followers that essentially guarantees serious investment for Amulyte from outside funding sources. This 'sure thing' in raising capital will allow Amulyte to focus on solving business development issues in the short term, rather than becoming distracted by seeking capital.

Essentially, Amulyte expands the 'Internet of Things' concept to include the elderly and infirmed. The end user wears a small battery powered device with a single button: 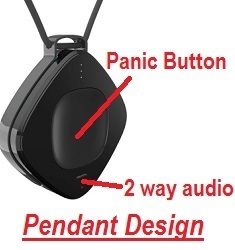 If the wearer encounters trouble, like a fall or disorientation, they press the button and a predefined list of phone numbers are called or text messages sent for assistance. In addition to calling, a web based portal allows others to 'check-in' and observe real-time activity of the pendant.

While the final design is still in process, the current plans call for bidirectional audio to be hosted on the pendant as well, so a responding party can directly communicate with the wearer. In addition to the 'panic' feature, the device is also slated to include:

Amulyte is not the only PERS device on the market, but the concept does have a number of advantages compared to current offerings, including:

No Physical Restriction: Unlike traditional PERS, the addition of cellular radios means that Amulyte is active wherever the bearer may be. Most PERS use a phoneline-connected base unit in home or facility, and the call button must be within local wireless range to be active. Amulyte claims a much larger operational range, and is active wherever mobile phone service is available.

Mobile Monitoring: A cloud based portal allows user to peer-in on the device at any point, revealing activity of the wearer. Traditional PERS are limited to audio interface only, while Amultye includes data from other onboard sensors, allow for passive observation or exception reporting to be noted anywhere web access is available. A concept screenshot of the app is shown below: 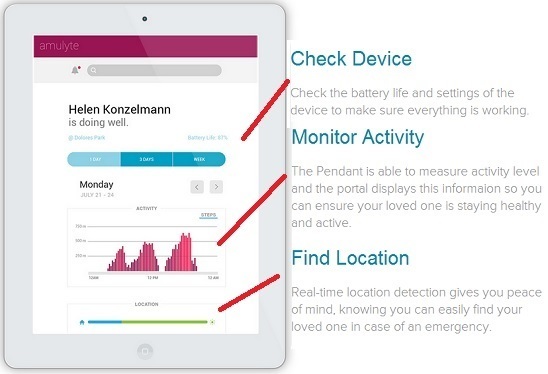 No Base Station: Unlike traditional systems that require buying pendants and base stations, often costing $300 or more, Amulyte is a self-contained and 'baseless' system that requires no additional equipment or phone utility for use.

Simplified Design: Once a pendant is enrolled, it remains active all the time, only requiring the onboard batteries to be recharged weekly. Unlike traditional systems that are codependent on power and phone utility, Amulyte is an entire system in a device.

Design In-Process: Amultye's hardware design is incomplete and the product is not shipping. One of the more substantial challenges appears to be fitting all of the features into a small, wearable form factor. Ultimately, the success of the platform only comes with the agreement of end users to wear/use the platform, and the matters of size, weight, colors, styling, and user interface design are not trivial and still have yet to be executed.

Producibility: Even wildly successful fundraising campaigns are fraught with problems in development and production. While early speculators are bullish on Amulyte, the company still is wading through significant platform design and operational issues. For example, there is no final decision on how emergency numbers like 911 are included in the call tree, app design is not beyond beta in any platform, and no concrete shipping dates for the product have been released.

Smartphone Duplicity: Amulyte's features can be found in most modern smartphone platforms, and alternative offerings simply leverage an app [link no longer available] onto hardware already being carried by many users. While a significant chunk of the intended market is the elderly who may smartphones too expensive and complex, those who do carry a smartphone will find no need to spend additionally on Amulyte.

Incumbent PERS providers sell product in a number of ways:

Amulyte most closely represents the 'DIY Option', although no relationship with a central station monitor has been announced. At the current time, only individual phone numbers are expected to be programmed into response lists. As a result, this leaves little opportunity for a reseller/integrator for RMR, although the company claims a volume discount structure is being developed for large sells.

However, Amulyte has a good chance to impact the PERS market, because of its increase range, web check-in portal, and simplified setup. While the product still in R&D, the founders of the company have engineering [link no longer available] and software development backgrounds, which improves their chances of execution compared to a catchy idea championed by a salesmen or marketer.