Dome cameras are the most widely used type professionally but many note that dirt, dust, rain, and scratches can cause image quality problems, especially with integrated IR.

We tested an integrated IR dome with these very issues to see how it impacted images day and night, testing the dome with light and heavy fingerprints, dust/dirt, and finally slight scratches, shown as best as possible below. Note that to the eye, some of these issues were not noticeable unless carefully inspecting, and could easily go overlooked in the field.

See our full results and recommendations inside.

In our tests, even slight smudges, dust, or scratches had significant negative impact on image quality at night with IR on, reducing details and blurring portions of the FOV, even if these issues were not present during the day, or visible on the dome itself.

Users should be careful when handling and cleaning domes to prevent similar issues, clean only with scratch-free wipes/clothes, and domes should be cleaned regularly to prevent build up of substances.

Note that in our tests, very little force was required to scratch the polycarbonate dome. Domes which are dropped on hard surfaces or even grass may easily be scratched. Users should keep protective coatings on domes as long as possible to try and prevent damage, and dropped domes should be carefully inspected, and possibly replaced.

We used a typical IR dome, the Hikvision DS-2CD2542WD-I, which includes IR LEDs under the same dome as the lens (though physically separated, shown in our IR Camera Reflection Test), and dirtied the dome as shown above, prior to cleaning and retested. A separate dome cover was used for the scratch test, as it could not be cleaned/repaired.

All of the issues above significantly reduced image quality at night with IR on, mainly due to the infrared reflectance caused by particles on the dome, which reflected IR back toward the lens, even when no debris was present directly in the camera's FOV. We show the full FOV of the camera with each of these issues below:

The comparison below shows the impact on subject/chart details. Even though some of these issues were barely noticeable on the dome itself, all had significant impact on nighttime image quality. Most drastic were the dome scratches. Despite being small/shallow, they degraded low light details to the point of providing only detection. 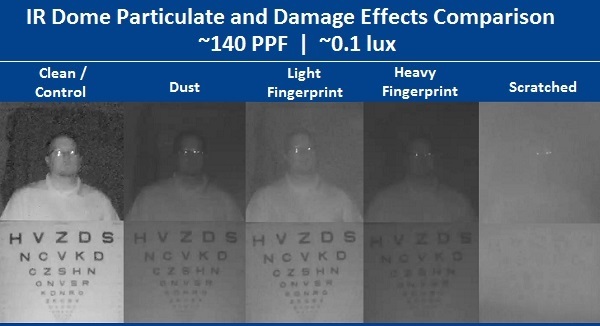 Daytime image quality was less severely impacted, in most cases adding a "fog" effect. Even the scratched dome that was unusable at night was was able to provide usable images / evidence. The animation below shows the mild to moderate impact of each:

Note that these effects may vary depending on dome and IR illuminator layout, though in our tests, any dome which covers both the lens and IR LEDs may be impacted by these issues. Bullet cameras and turret style domes which separate the IR illuminator and lens (e.g. Hikvision EXIR 1.0) are less likely to be affected.

How do you handle them? Tell us in the comments below.

Camduster Camera Cleaning “Robot” Tested on Nov 23, 2022
The Camduster Cleaning robot claims to automate lens cleaning, removing the...
Video Surveillance Cameras 101 on Feb 25, 2020
Cameras come in many shapes, sizes and specifications. This 101 examines the...
IP Camera Installability Shootout 2019 - Avigilon, Axis, Bosch, Dahua, Hanwha, Hikvision, Uniview, Vivotek on Dec 09, 2019
What are the best and worst cameras to install? Which manufacturers make it...
Pole Mount Camera Installation Guide on Apr 11, 2019
Poles are a popular but challenging choice for deploying surveillance cameras...
Camera Form Factor Guide on Mar 16, 2018
When selecting surveillance cameras, users may choose from a number of...
Dome Versus Turret Camera Usage Statistics 2017 on Aug 07, 2017
Turret cameras are a growing segment within video surveillance. Indeed, many...
Comments (22) : Subscribers only. Login. or Join.