Almost everybody in the security industry has a horror story of a "low bid" system installation that has gone terribly wrong. Many city, county and state government entities are avoiding those pitfalls with a "design-build RFP" approach to procuring video surveillance and access control systems. In this note, we examine the reasons why, take a look inside the design-build process, its potential and pitfalls.

A couple of key drivers exist:

The process starts by assembling a team from within the organization that includes a representative from each department that will be involved with procuring, using, managing and maintaining the system. A city team usually includes project management,  attorney's office, purchasing, IT, security/police, facilities and maintenance. On larger projects, this team usually includes a consulting engineer in a different role than a bid project with responsibilities to develop a project budget, produce generic project drawings as needed, assist with developing design objectives and produce performance-based specifications. The consulting engineer also plays an important role in the proposal review process, but generally does not have a vote in the selection process.

The team defines the objectives of the RFP, project schedule, the contractor's responsibilities, the responsibilities each department has in the project's implementation, and response scoring criteria are determined. The purchasing department includes this into a standard boilerplate design-build RFP template. The RFP is usually broken down into separate pricing and technical sections. Usually, the pricing and technical sections of the proposal are weighted differently (ex. 60/40), but the team can determine how they wish to categorize, weight and judge the responses and the criteria are included in the RFP. Here is a good example of a design-build RFP from the City of Tampa, FL.

The Tech Details of a Design-Build RFP

The technical details specified in a design-build RFP can vary but differ from traditional RFPs in the following key ways:

Responding to a Design-Build RFP

Responding to design-build RFPs is much more involved than a standard bid project which is usually a price sheet and a couple of legal forms. Most of the time, what constitutes a typical bid response makes up only part of the pricing section of a design-build proposal. A typical design-build RFP response for a large project is a major undertaking, requiring submitting multiple copies of a binder full of information in tabbed sections as outlined in the RFP.

One key element of the RFP response is the technical narrative, this is where the respondent technically describes their approach to the project, offers their recommendations for hardware and software, and explains in detail how the system in will function and operate.  This is where the technical committee will focus their attention.  The technical people are the gate-keepers, nobody gets past them without approval, but they usually aren't the final decision makers.

Here are some suggestions for integrators to consider when preparing a design-build RFP response. 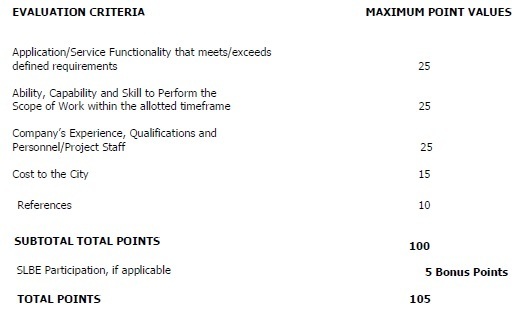 Each agency has strict law and rules on how RFPs are issued and how the responses are processed. They can vary greatly, but here is an example of how some of them work. Just after the response deadline, a quick public opening takes place where the proposals are unboxed and a list of responders is generated, no pricing or other details are revealed or discussed. After this public opening, the purchasing department and city attorney will review each response to verify that it contains all of the required information and legal qualifications are met as listed in the RFP. If a proposal does not include the required information, it can be labeled as unresponsive and be rejected.

The selection committee generally focuses on the non-technical parts of the proposal such as the responder's experience, references, insurance/bonding, D&B ratings [link no longer available], company financials and system cost. Financial and experience reviews can be key factors on large projects, to ensure that a company can complete the project. The selection committee meets to score the reviews based on the criteria in the RFP, tabulate the scores and ranks the responses.  This meeting often takes place weeks after the RFP response due date. Here is an example of a winning RFP response for a project in the City of Hagerstown, MD.

Many times the committee does not declare a winner at this review and scoring meeting. Often times, they will "short-list" the three highest-ranked proposals and schedule a presentation and interview meeting where the responder has a period to formally present their proposal and present a product demonstration if requested and the committee has a period to interview the responder and ask questions. Most design-build RFP's include this short-list option. After the interview process, the committee will make their selection from the short-listed responders.

Most competent integrators prefer the design-build approach as it allows them to compete with a more focused holistic approach and not just on price. They are typically not low bidders and shy away from most bid projects. Design-build also allows them to select equipment that they are familiar or certified on as well as using design approaches that they specialize in. The design-build format favors them as the responses are detailed, technical and require a significant amount of man-hours to complete, which is a luxury most smaller companies do not have.

When done properly, the risks in design-build are lower than with than traditional bid projects. However, there are bad RFP's that get released frequently that have problems such as: