The Blacklist Clause, which bans Hikvision/Dahua/Huawei users from doing business with the federal government, goes into effect on August 13 and the best hope that it would be delayed - a Senator's amendment - has failed. 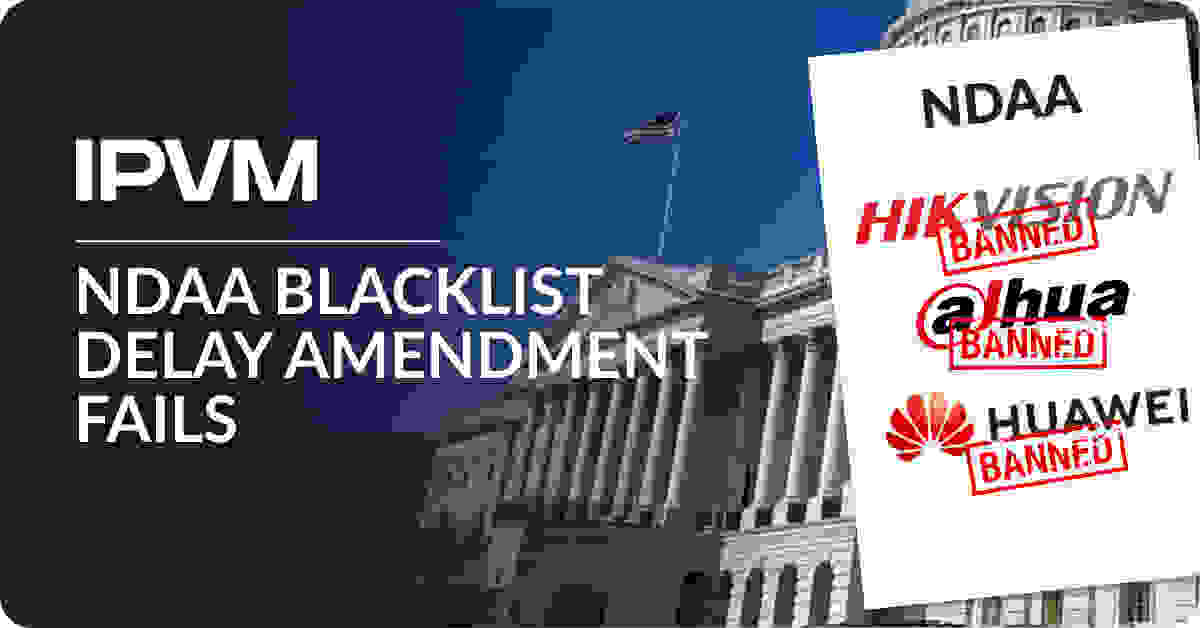 In this post, we examine the impact of this latest development.

And now we take you live to SIA headquarters:

In all seriousness, my problem with SIA et al's response is that this has been public and known for 2 years now. Axis and Hanwha and Bosch and many others knew they needed to take steps to comply and they did.

How many years notice does SIA need? Let's be honest. There's a lot of people in the industry who have aimed not to comply with this impending law because they just want the easy money to roll.

I take issue with the article's conclusion. While the reporting is excellent, and accurately indicates the letter of the law, the reality is probably quite different.

How will this be enforced?

Will a Federal government employee come to my office to check for Dahua cameras?

Will my Federal clients get a letter in the mail from the government telling them the cameras must be removed? Will they then try to hold me financially responsible for the removal and replacement?

Who is supposed to pay for the removal and replacement of this banned equipment?

When I told one of my Housing Authority clients (HUD funded) about some banned equipment that was just recently installed by one of my competitors, the Director replied rather curtly: "We know about the ban, and we are not installing any more of his equipment, but we will replace the already installed cameras when the Federal Government sends us the money to do so."

I suppose that they will eventually add a line to some Federal form, that the contractor must sign, pledging that they don't use banned equipment. But of course with no mechanism for enforcement, many will just lie.

And this whole idea of Blacklisting is flawed on its face because it is inherently un-American. It is an embarrassing leftover from the era of McCarthy. The people who might become blacklisted will sue, and most likely prevail.

Plus the obvious giant loop hole in this. Go ahead and Blacklist Bob's company, and he will just dissolve the corporation and reconstitute the business in his wife's name. Duh.

If the Government wants these cameras gone then fine. But put the responsibility on the Federal agencies themselves, or the federally funded organizations, not on the integrators.

There is a big difference between banning Chinese cameras (perhaps a good idea), and Blacklisting Tax paying American small businesses. (definitely a bad idea and actually impossible to do)

Thanks for reading this far.

The US government's message is clearer than ever: comply now or face blacklisting.it’s clear they’re sending a message.

it’s less clear what the message is.

for example, the GSA says

but do they really want a contractor to immediately remove working equipment from government facilities?

do they get to keep it then? throw it away? who replaces it, and at whose cost?

2 years into this thing you think they would have nailed these questions down.

It is federal government property. You can't keep it. They inventory everything. It will go to IT heaven until they do a purge, usually after the next inventory cycle, when they recycle it, etc.

It is federal government property. You can't keep it.

so then you don’t owe them for it, i suppose.

can you just swear to not use Hikuawei ever again and at the same time sell them a new Axis replacement?

2 years into this thing you think they would have nailed these questions down.

Well, this is still the Federal Government after all. Give them a decade or two, along with a few billion dollars and they will have a two thousand plus page "document" that will detail how this is supposed to work.

Thanks for the comment! I've examined the new DoD guidance, here's some highlights:

Existing delivery contracts will include the FAR clause for orders issued on or after August 13, 2020. That means no leeway or loopholes for existing contracts.

Contracting officers shall, in accordance with FAR 1.108(d), modify— Existing indefinite delivery contracts to include the FAR clause for orders issued on or after August 13, 2020, prior to placing any such orders; and Existing contracts, task orders, and delivery orders to include the FAR clause if executing a modification to extend the period of performance, including exercising an option, on or after August 13, 2020

For extending contracts, DoD "should" provide contractors "with adequate time to comply". No details on how much time that actually means, and "should" is only a recommendation (as opposed to "shall").

When executing a modification to extend the period of performance, including exercising an option, on or after August 13, 2020, contracting officers shall obtain the representation and should provide a sufficient amount of time to both provide notice for exercising the option and to provide contractors with adequate time to comply with the clause and provide the representation.

If a contracting officer doubts a contractor is being honest in their representation, the officer shall "consult with the program office" and "legal counsel". Not many details beyond this, but it's an indication that the DoD is preparing for some contractors that file dishhonest representations in order to keep their government business.

System for Award Management still not updated. The SAM update should provide more details to the many questions contractors still have about the blacklist clause. However, this update is still in the works and DoD did not provide a specific timeline.

If the DoD contracting officer can't determine whether the contractor actually uses covered equipment/services, then the award shall not be made.

If the contracting officer is unable to make a determination [...] then award shall not be made to that offeror unless a waiver is granted.

We had a meeting with our legal and outside council on this. The language of this law is not as clear as we would hope for but that does not surprise me. We have requested some additional guidance.

Yes, the details can be quite unclear. FYI, GSA is hosting a webinar on August 12 and says you can still ask questions before August 5th: