One of the most important access control alarms is also often ignored.

"Forced Door" provides a vital and even critical notification against security risks, but many users simply dismiss them as too minor for a response.

Why is this the case? How can the situation be corrected? We examine these key factors inside:

Despite the dramatic name, a 'forced door alarm' almost never means an external threat has pried open a door. 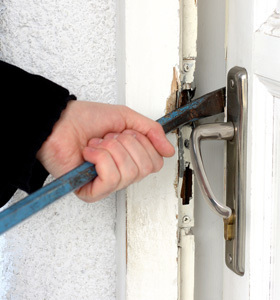 Instead, when a guard or security operator is dispatched to check out the alarm, often what is discovered is an otherwise locked and perfectly functioning door.

Coupled with its rather frequent occurrence, many quickly learn to dismiss the notification as 'noise' and choose to focus on more urgent and likely threats.

However, ignoring these outright presents a huge problem. While the risk may be low, being promptly notified when someone forces open a door is a core value of EAC. Letting a system malfunction persist and dismissing it as a 'nuisance' is shortsighted and can result in disaster.

Despite the same alarm message appearing on different doors, the actual root cause can differ. Inspecting the door, lock hardware, and access devices for tampering is the first step; if nothing appears out of the ordinary, then observing user behavior through the door is next.

The most common sources are: 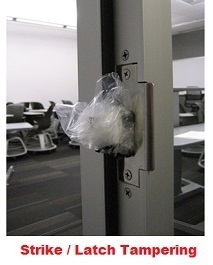 Due to simple mechanical wear or malicious tampering of latches and sensors, an EAC system may mistakenly send 'forced door' alarms. The first aspect to troubleshoot is checking that all locks (electric strikes/ drop bolts / maglocks) are free of tampering and are in proper alignment. Especially around doors commonly used for break areas (eg: smoke break lean-tos, cafeteria access) hardware tampering is a prime culprit. Taped down latch bolts, trash inserted into strike boxes, and copy paper stuck between armature and magnet can result in doors being closed but not secured.

Aside from tampering or wear, the RTE devices, specifically PIR sensors, are the biggest cause of forced door alarming. The timing of the sensor is often different than the delay periods programmed into the access system, and if the operation of the two elements is out of sync, alarms can result. 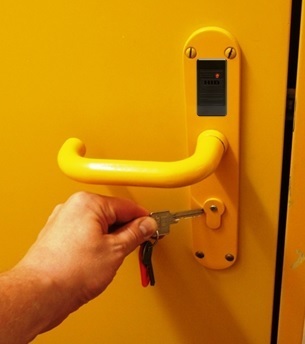 When no mechanical issue is found, the root cause is often 'outside' the system via unauthorized use of mechanical keys to open doors. Users sometimes 'rebel' to gain entry and continue the habits of unlocking doors without using electronic credentials.

Other more specific causes may be present, such as malfunctioning or improperly configured sensors with the door controller or discrepancies in programming logic of the EAC system.

Fortunately, correcting these issues is typically simple and inexpensive:

Not Required, But Useful

Many end-users choose to disable or do not use 'forced door' notifications altogether. Facilities that do not actively monitor system status, or only passively respond to events often just leave those features unconfigured. Since EAC system status alarms are only useful if actively dispatched against, the feature would be ignored regardless of accuracy.

[Note: This guide was originally written in 2013, but substantially updated in 2018.]

VergeSense Presents People Tracking Sensor on Jun 04, 2020
VergeSense presented its people tracking sensor and social distancing insights at the May 2020 IPVM Startups show. A 30-minute video from...
FLIR A Series Temperature Screening Cameras Tested on Jun 04, 2020
FLIR is one of the biggest names in thermal and one of the most conservative. While rivals have marketed fever detection, FLIR has stuck to EST...
"Fever Camera" Show On-Demand Watch Now on Jun 03, 2020
IPVM has successfully completed the world's first "Fever Camera" show. Recordings from Both days are posted at the end of this report for on-demand...
Cobalt Robotics Presents Indoor Security and Access Robots on Jun 03, 2020
Cobalt Robotics presented indoor security robots at the May 2020 IPVM Startups show. Inside this report: A 30-minute video from Cobalt...
Dahua Sues Ex-North American President, Says Legal Typo on Jun 03, 2020
Dahua's former North American President Frank Zhang claims he is owed almost $11 million but Dahua counter claims it is just a "scrivener's error",...
Smart Entry Systems Presents Cloud Multi-Tenant Access Control on Jun 02, 2020
Smart Entry Systems presented Cloud Multi-Tenant Access Control at the May 2020 IPVM Startups show. Inside this report: A 30-minute video...
Genetec Drops Support for Dahua and Hikvision on Jun 01, 2020
Genetec has dropped support for Dahua and Hikvision, citing US blacklisting and ONVIF conformance blockage, the company informed partners in an...
Dotty "Hot Or Not" Elevated Body Temperature App Tested on Jun 01, 2020
What if you could take an existing phone or tablet and transform it into "fever camera"? That is what DottyAR is doing with their strangely named...
Optris "Fever Screening Systems" Examined on Jun 01, 2020
German manufacturer Optris has been building temperature measuring instruments for industrial manufacturing for over 15 years, and thermal cameras...
Fever Camera Sales From Integrators Surveyed on Jun 01, 2020
Fever cameras are the hottest trend in video surveillance currently but how much are integrators selling them? 220 integrators answered the...