A simple and common misunderstanding in specifying pushbuttons can kill people trying to escape burning buildings. Furthermore, determining buttons that are 'safe' versus 'deadly' can be difficult to detect unless you check how they are implemented. We explain this issue and options to resolve inside.

RTE by the Books

Most Electronic Access Control systems must comply with national/ international code books. We examine the subject in our "Request to Exit Tutorial", a helpful primer on the subject. Perhaps the broadest authority is the IBC (International Building Code) part 1008.1.4.4 that affirms:

Notice among the key requirements are two key elements:

Failing to conform with these two items can result in trapping people trying to escape in a emergency.

In the example door below, the access control installer is using maglocks to secure a busy perimeter opening. The customer asked the installer to use some extra 'Push to Open' pushbuttons instead of agreeing to buy the proposed RTE buttons as part of the access system. Not wanting to lose the sale over an inexpensive component, the installer agreed to use the extras in place of RTE pushbuttons, and considering the button language is very close to what normally is printed on RTE, the installer felt confident in the slight change. 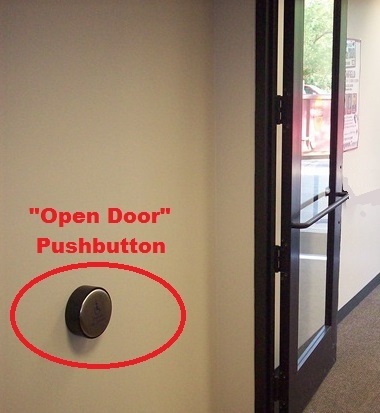 However, this installation missed a key point of the code: the latching delay, or timer function of the button. Why is this function so critical?

In the example above, the maglock loses power as soon as the button is pushed. However, as soon as the button is released, power is returned to the maglock, relocking the door. Consider that even in a panic situation, it would take several seconds between pushing the button and reaching the unlocked door, and left 'as-is', the door could become a grim example of how escapees are trampled or trapped as they hurriedly rush a locked emergency opening.

The key feature that is missing is a timed 'open' feature of the contacts. A proper RTE pushbutton would include a mechanical or electric timer that would continue to drop power to maglocks for a certain length of time, typically 30 seconds. This allows adequate travel time between pushing the button and passing through the door in an emergency.

Not All 'RTE Labeled' Buttons Timed

The mythical situation above would not pass code for a variety of reasons; including the fact that an ADA wheelchair "door open" button cannot be substituted for RTE Pushbuttons based on verbiage and visibility, aside from function. Those buttons are used to activate automatic door openers and would not likey be used in conjunction with maglocked doors to begin with.

However, finding untimed RTE buttons is common in the mass market. These buttons are useful when combined with external timers or other building management systems where a momentary contact is required to release door locks. Although if improperly installed, these buttons have the same illegal function as the ADA pushbutton, and using them often requires additional equipment or local AHJ exceptions to the IBC code in order to be used.

For Electronic Access Control, RTE buttons with an integrated timer typically takes one of two types:

In either case, the button is not intended to be wired as an input into a door controller to use the access control system to break contact for 30 seconds. The RTE buttons must be directly installed to the lock, so that a malfunctioning system cannot potentially cause harm. The button must be installed as if it worked to physically sever power to the lock under any circumstance.

While the IBC Code is very clear on the installation and function of these buttons, many local exemptions that override the IBC are not as well defined. Commonly, local code exceptions are ratified to clarify superficial requirements (ie: instead of green "Push to Exit", buttons must be red, lit, and bi-lingual "EXIT/SALIDA" buttons) but they fail to address the critical timed portion of the IBC requirement.

Due to an impartial understanding of this feature and why it is so important, many AHJs might unwittingly accept half-measure substitutes. Because local codes often do not describe devices well enough, it is incumbent on Access Control designers and installers to prevent a tragedy before it happens.