But HD analog recorders are pretty simplistic and underwhelming.

Moreover, many want to use HD analog cameras with their established, higher end VMS software systems.

Now, Dahua has released 4, 8, and 16 channel 1080p HD-CVI encoders, which should make it easier to connect HD-CVI cameras to VMS software.

We tested the Dahua NVS0404HDC-A [link no longer available], a four channel model, with multiple fixed and PTZ cameras, attempting to integrate with Avigilon, Exacq, Genetec and Milestone VMSes:

Here are our key findings from our test of the Dahua NVS0404HDC-A:

The NVS0404HDC-A provides a reliable means to add HD video to VMS systems in existing analog installations, at a price lower than IP only systems. These encoders also do not suffer from the performance issues seen when using analog HD DVRs with VMS systems.

However, it is not fully compatible with all VMSes. Users should carefully review which features are and are not supported in their chosen VMS, as key items such as motion detection and multistreaming may not work.

In this video, we review the physical construction of the Dahua NVS0404. Notably, it is much larger than many encoder models, built in a 1U rack mount form factor, instead of the compact desktop/wallmount form seen in most 4-channel models.

Those experienced with Dahua's DVRs will find the web interface of the NVS0404HDC-A similar, with few changes. We cover the basics of configuration in this screencast:

The NVS0404 connected with few issues to Avigion, Exacq, Genetec, and Milestone, though the number of licenses (and number of devices required) varied, as seen below: 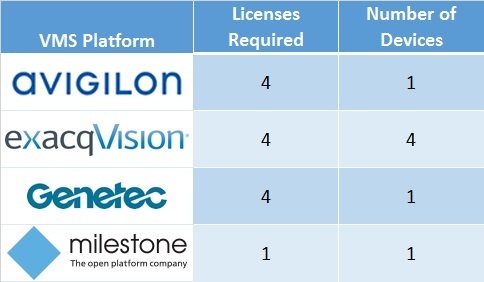 Advanced encoder features such as motion detection, PTZ control, multistreaming, etc. were not supported in all VMSes, with most supported only in Security Center and XProtect.

In the chart below, we summarize which features worked and which did not, based on our tests:

This video reviews VMS integration for these VMSes, including adding the device, licensing, features supported, and more.

As we found during our testing of Dahua HDCVI DVRs, they may also be used as encoders, with RTSP streaming and limited ONVIF support.

However, in contrast to Dahua's HDCVI encoders, VMS compatibility using ONVIF was spotty, with some VMSes connecting and streaming properly, others not connecting at all, and Exacq freezing and crashing when trying to connect. Additionally, no advanced features such as multistreaming, motion detection, I/O, etc., functioned properly. RTSP streaming from DVRs to VMSes worked without issue.

The following HDCVI cameras were used for compatibility testing:

Axis HD Analog Encoder Tested on Oct 11, 2019
Two years after declaring "Everything is IP", Axis has released their first...
Dahua Finally Has A US Distributor on Oct 08, 2015
Finally. Billion dollar Dahua is the 'smaller' of the two mega Chinese...
$100 True WDR Camera Tested (FLIR CVI) on Jul 31, 2015
True WDR has traditionally been quite expensive. And HD analog has so far...
Comments (25) : Subscribers only. Login. or Join.