A strong initial reception but can it repeat?

We tested two 1080p bullet cameras, the motorized zoom HAC-HFW2220RN-Z [link no longer available] and the compact HAC-HFW2220-SN, along with the HCVR7216S, a "tribrid" recorder supporting HDCVI, SD analog and IP cameras. 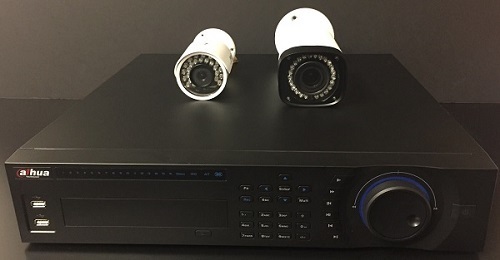 Can Dahua repeat or will this be a dissapointment?

In this test we examine:

These are the key findings from this test:

Pricing for the HDCVI models used in this test is as follows:

Note that due to Dahua's limited availability in North America, these prices reflect quotations from online suppliers. Pricing may be lower depending on quantity or supplier.

Compared to Gen I

Pricing of the HAC-HFW2220S is approximately the same as its first 1080p generation counterpart, the HFW2200S [link no longer available].

As with first generation models, this pricing is substantially lower than these cameras' IP counterparts. For example, while the 1080p HDCVI bullet sells for ~$75, a comparable Dahua 1080p IP bullet is ~~$150.

As with all of the analog HD over coax cameras we have tested, Dahua's second HDCVI generation offers HD image quality while reusing existing cables, at a price point lower than IP. However, for those looking for top WDR or low light performance, HDCVI still falls short of leading IP models.

The HCVR7800 series Tribrid DVRs are a good choice for those looking to upgrade to HDCVI while looking to maintain existing analog cameras or who wish to use IP cameras in select applications (such as low light or WDR scenes given the limitations above).

Finally, as mentioned previously, Dahua's lack of a direct North American channel presents challenges in product procurement and tech support. Integrators must seek out product through one of Dahua's OEMs or forgo technical support.

The Gen 2 HDCVI cameras were tested against previous generation HDCVI and IP integrated IR cameras in our interior test scene: 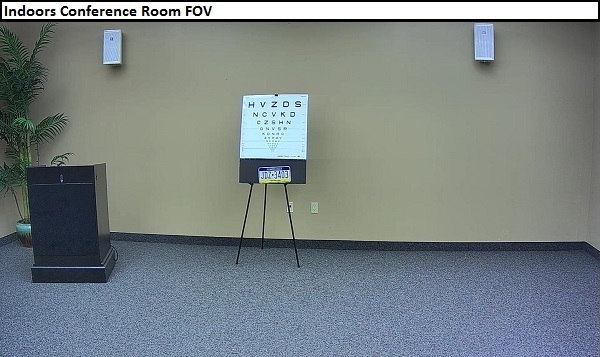 In full light, contrast of the new Gen 2 cameras (HFW2220RN-Z and HFW2220SN) was slightly better than the previous generation HDCVI camera, improving details of the subject's features. White balance was notably bluish, but this was not a practical issue. 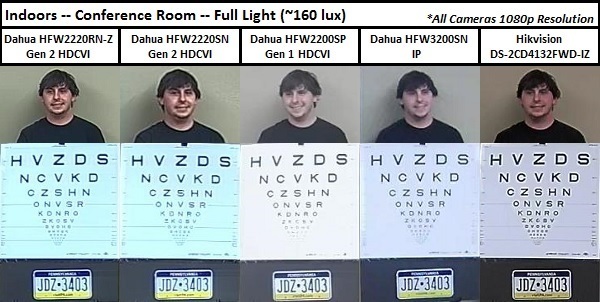 In low light with IR on, both new generation HDCVI bullets were noisier than other cameras. Additionally, IR coverage was uneven, with a strong center hotspot and notable weakening at the edges of the field of view. Both of these issues may be seen here: 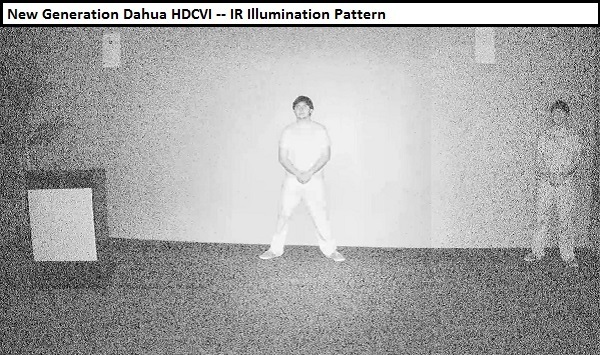 This increased noise decreased image quality compared to other cameras in the test, with details of the subject obscured. 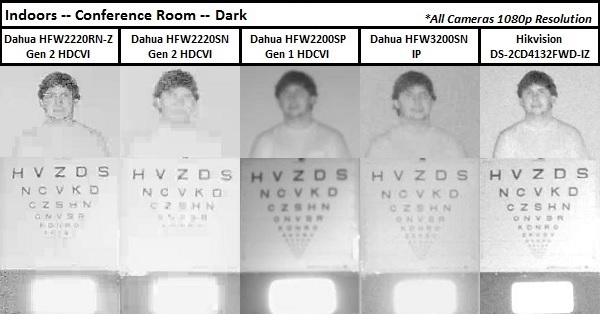 Both new generation HDCVI cameras default to WDR off and it must be turned on via the camera's OSD menu. We review differing WDR settings in this screencast:

With WDR off, details of the subject against strong backlight are difficult to discern, and he is completely undetectable in the dark area beside the door. With WDR on at its default setting (3), details are visible against strong backlight, and the chart legible. He also becomes visible in the dark area of the scene, and the chart legible. With WDR set to maximum levels, details are improved and the subject easily visible next to the door, though visible noise increases greatly. 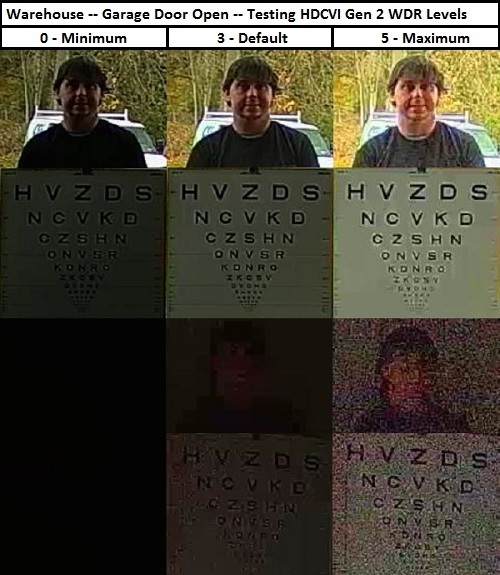 The HFW2220RN-Z and HFW2220SN are far superior to Dahua's previous HDCVI and IP cameras in both the strongly backlit and dark areas of the scene. Performance against backlight is compared to top WDR models such as the Axis Q1615 and Samsung SNB-6004 is also strong.

However, due to the increased noise of high WDR settings, image quality is poor in the dark area of the scene compared to top WDR models. 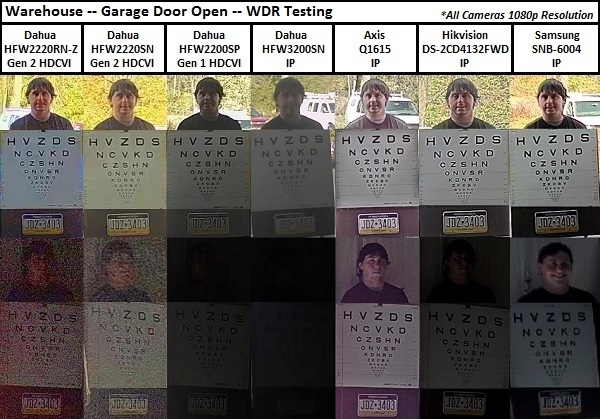 Due to their greater digital noise, both second generation Dahua HDCVI bullets consumed more bandwidth than HDCVI Gen I and integrated IR IP cameras in the same scene. Only the non-IR Axis Q1615 and Samsung SNB-6004 were higher in low light.

The chart below shows bitrates in full light and low light, taken at 10 FPS (all cameras 1080p). Note the drastic increase in bandwidth between Dahua's Gen I and Gen II HDCVI models, more than triple the bandwidth at night.

The HCVR78XXS DVRs are compatible with HDCVI, analog, and IP cameras. Detection is automatic for HDCVI and analog cameras and requires no manual switching. Users manually select which channels will be IP with changes from HDCVI/analog to IP and back requiring a reboot. The following video shows all three types of cameras attached to the recorder, and the process for configuring channels.

The tribrid DVR includes support for 1080p IP cameras via ONVIF and a small number of direct camera drivers (Dahua, Axis, Sony, and more). ONVIF and Dahua cameras are automatically detected on the local network.

We had no issues connecting to cameras from Dahua, Hikvision, Sony, Axis, Avigilon, Bosch, Samsung, or others during testing. However, note that motion detection is supported only on Dahua IP cameras. Only continuous recording is available for other manufacturers.

All cameras were tested using default settings with the following exceptions:

HD Analog DVRs With Exacq, Milestone and Genetec VMSes Tested on Aug 23, 2016
HD analog offerings have proven to deliver HD video at radically lower...
SD Analog is Finally Dead on Oct 19, 2015
Good news. For years, industry people have hoped for the demise of NTSC and...
Dahua Finally Has A US Distributor on Oct 08, 2015
Finally. Billion dollar Dahua is the 'smaller' of the two mega Chinese...
$100 True WDR Camera Tested (FLIR CVI) on Jul 31, 2015
True WDR has traditionally been quite expensive. And HD analog has so far...
Samsung Goes AHD, Sets Battle with Dahua and Hikvision on Jul 20, 2015
HD analog continues to grow. One of the biggest problems so far is the lack...
Ranking The Lowest Cost Outdoor Cameras 2015 on May 14, 2015
Outdoor cameras can be expensive. In our last study of this segment, the...
HD Analog Usage and Rejection Statistics 2015 on May 11, 2015
Non-IP HD cameras are one of the most notable new trends in video...
Testing Honeywell HQA HD-CVI on Apr 22, 2015
HD analog support continues to expand, with Honeywell now releasing its own...
Honeywell Launches HD-CVI on Apr 01, 2015
Honeywell becomes the biggest western surveillance manufacturer to release HD...
Axis vs Hikvision vs Sony Encoder Test on Mar 18, 2015
In this report, we share test findings of three popular four port analog SD...
Dahua vs Bosch and Axis 4K Cameras on Mar 02, 2015
4K is here, but not without issues. High prices and poor low light...
Dahua Attacks Hikvision on Dec 26, 2014
Things are getting ugly between the two biggest surveillance manufacturers in...
Hikvision HDTVI VS Dahua HDCVI on Dec 10, 2014
With super low cost and full HD video, Analog HD has the most potential to...
Major Moves - Security Manufacturers 2014 / 2015 on Dec 08, 2014
This guide summarizes the biggest moves of security manufacturers in 2014 and...
Testing Dahua Cameras 2013 on Jul 08, 2013
You may not know Dahua, but you should. They are the 'other' big Chinese...
Comments (4) : Subscribers only. Login. or Join.