IPVM has validated, with testing, and from Dahua, that many Dahua cameras have a wiretapping vulnerability. Even if the camera's audio has been disabled, an attacker can still listen in unauthenticated.

Inside this report, we examine how it works, how it was originally found in an OEM partner's product, what Dahua has done and not, to date, to fix it.

Here is what we have determined so far:

We have not determined what of the dozens of Dahua OEM partners are impacted, outside of Amcrest, where this was originally found, but given that Amcrest and Dahua branded cameras are impacted, it is likely that many others have this vulnerability as well.

Dahua Security Team and R&D Team have conducted an emergency investigation, and the preliminary results are as follows:

Compatibility is a common problem faced by manufacturers in the industry, and we are working hard to solve this problem. [emphasis added]

The vulnerability was first reported to Dahua in May 2019. Research Engineer Jacob Baines of Tenable uncovered a vulnerability within an Amcrest (Dahua OEM) camera's firmware (PoC found here, CVE-2019-3948), which allows unauthenticated access to the audio stream. The endpoint, /videotalk, can be accessed unauthenticated.

First, we targeted a Dahua camera (specifically the 4K Starlight box camera, IPC-HF8835F tested here) with the script used to exploit the Amcrest camera. The gif below demonstrates connecting the to the endpoint and the download starts.

The output file not created due to either a flaw in the original PoC or format/protocol mismatch between Amcrest (alaw) and Dahua.

The next method was using VLC media player to open the stream, again without being prompted for credentials. It appears that VLC is not playing the audio, however using wireshark shows the data stream immediately upon the sending the VLC command. Our test workstation is 172.20.128.117, and the camera is 172.20.129.132 below.

Then we were more simply able to hit the /videotalk endpoint in a browser and initiated the audio stream / download.

Disabling Audio Does Not Resolve

IPVM originally tested the camera after factory defaulting it (audio is defaulted on) and was able to gain unauthorized access. However, even after disabling audio within the camera's web interface, we were still able to get access via all of the methods outlined above. 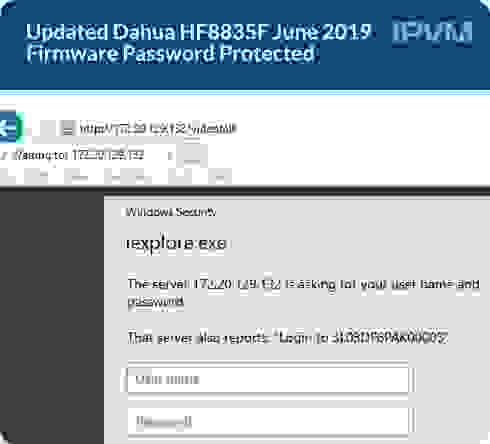 There are no release notes available with the firmware explaining that a known vulnerability was fixed, nor is there any evidence that this was communicated in any other way.

Amcrest's response was also problematic and confusing. The vulnerable firmware is a higher revision (2.5xx) than the patched firmware version (2.4xx), which is atypical, to say the least.

On our first call, we explained the vulnerability and confusion about the firmware release and our desire to verify that information is accurate. Amcrest hung up on us. On our second call, we were told that the firmware addressed compatibility with chrome and email alerting improvements, but had nothing to do with audio. The release notes mention vague "Additional security enhancements." but no clarity about the specific vulnerability at risk.

While video vulnerabilities have definitely increased in awareness and attention, audio is even more sensitive as laws tend to be stricter about audio being recorded without consent. These Dahua vulnerabilities enable wiretapping. While most IP camera users do not use audio, that this can be exploited without any such use or even if explicitly disabled, raises real concerns.

As problematic is Dahua's lack of response and disclosure. Dahua has known about this for nearly 3 months (reported on May 8th, today is August 2nd). Yet despite that, they have not issued a public notification nor given any clarity about what specific models are or are not impacted and, by their own admission, still have another vulnerability to fix.

This is not a new problem for Dahua. In 2017, when they had their massive backdoor, they struggled for many months to properly and clearly communicate and fix what was vulnerable.

Given their US government ban, Dahua may be understandably reticent to call attention to new vulnerabilities. However, if they do not and are caught, as they are here, it further decreases trust.

UPDATE: Dahua has issued a security advisory today August 2, 2019 - "VideoTalk function of some Dahua products have security risks", in which they say they knew about this in 2018 yet never disclosed this.

Dahua Broken Access Control Vulnerability on Jan 25, 2022
Just 4 months after Dahua admitted 2 critical vulnerabilities, Dahua is...
Dahua New Critical Vulnerabilities 2021 on Sep 07, 2021
Dahua has admitted two new major vulnerabilities, discovered by cybersecurity...
Directory of Video Surveillance Cybersecurity Vulnerabilities and Exploits on Jul 29, 2021
Cybersecurity vulnerabilities have escalated over the past few years and...
Dahua USA Holds On, Hikvision USA In Crisis on Jul 28, 2021
In the US, both Dahua and Hikvision face an existential threat, however,...
Dahua OEM Directory on May 05, 2021
Updated for 2021, this directory includes US Government-banned Dahua OEMs for...
ADI Secretly Relabels Dahua on May 05, 2021
ADI has started to secretly relabel Dahua with Huawei chips inside, IPVM has...
Milestone Denies Dahua "Joint Value Proposition" on Nov 11, 2020
Just days after Dahua's racist Uyghur tracking was revealed, Dahua ran...
Dahua Critical Cloud Vulnerabilities on May 12, 2020
Dahua has acknowledged a series of cloud vulnerabilities that researcher...
China DVR/NVR Backdoor Discovered, Huawei Refutes on Feb 07, 2020
A backdoor was found in Chinese-produced DVRs and NVRs that secretly allowed...
US DoD Comments on Huawei, Hikvision, Dahua Cyber Security Concerns on Oct 16, 2019
A senior DoD official said the US is "concerned" with the cybersecurity of...
Dahua New Critical Vulnerability 2019 on Sep 23, 2019
Dahua has quietly admitted 5 new vulnerabilities including 1 critical...
3 Weeks Later, Honeywell Still Cannot Say Whether They Are Vulnerable To Dahua Wiretapping [Now Admits] on Aug 27, 2019
The Dahua wiretapping vulnerability and Dahua's decision to delay disclosing...
Honeywell Speaks On NDAA Ban, New Non-Banned Cameras and Cybersecurity on Aug 06, 2019
For years, Honeywell has depended on Dahua, a company with a poor...
Comments (52) : Subscribers only. Login. or Join.