Falling overboard to die alone in a dark cold sea is terrifying. Video analytics might solve this, but cruise operators are wary of false alerts.

In 2010, to deal with this, the US government passed the Cruise Vessel Security and Safety Act (CVSSA) making surveillance systems mandatory in cruise ships to capture crimes and people falling overboard. Most ships have cameras now, but the industry is still trying to find a reliable man overboard system. We examine a recent U.S. Government Accountability Office report and talked to the largest cruise industry association to find out more about what’s holding things up.

The GAO audit examined the progress of CVSSA compliance. The law includes 15 provisions (below) and requires cruise ships to report crimes to the FBI and the Coast Guard. 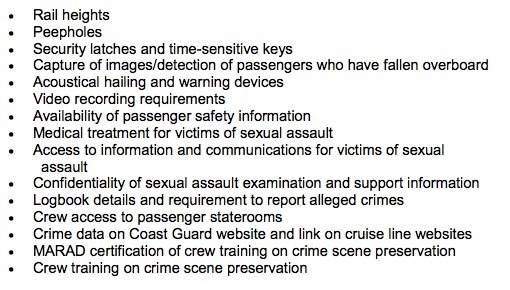 If you’re wondering how the U.S. can make regulations for ships flagged and operated from other countries, see the regulatory structure diagram below. If a ship comes into a U.S. port, it must follow U.S. regulation regardless of country of origin. 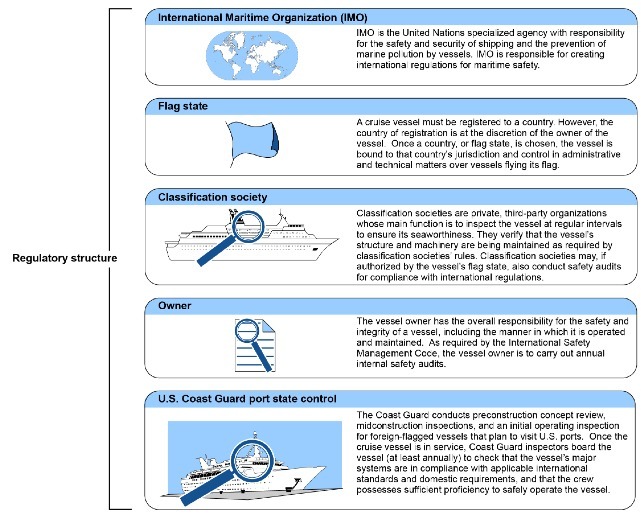 The GAO found that 11 of 15 of the provisions from the CVSSA have been implemented, but three of the four remaining deal with technology. They are:

The U.S. Government has yet to provide any kind of system standards or enforcement for these remaining provisions.

The CVSSA says a “vessel shall integrate technology that can be used for capturing images of passengers or detecting passengers who have fallen overboard, to the extent that such technology is available.” And as of right now, it is not, says Cruise Lines International Association (CLIA).

“It’s still an emerging technology,” said a CLIA spokesman in a phone interview. He says cruise ships have been testing these types of technologies since 2006, but haven't found anything reliable enough. Currently at least five unnamed cruise lines are testing different versions of the technology, according to the GAO report.

A recent ABC report features a system from Radio Zeeland that incorporates cameras and lasers for man overboard detection. The company markets it's system for cruise ships, but in the news segment, they demonstrate it on a yacht in still water in a boat that is not moving. The president of the company tells a reporter that he has no idea why cruise ships wouldn't want to adopt the technology.

Here is the full segment:

However, in developing the technology, he should be aware that false alerts can be an issue. And if he is in contact with the cruise industry, he would know false positives or failure to alert are primary concerns about the technology.

From the GAO report:

“CLIA stated that the technology exists to reliably capture images of people falling overboard through closed circuit television, thermal imaging, and so forth. However, the technology to reliably detect persons as they are in the process of going overboard does not presently exist. CLIA believes the technology is not yet reliable in a maritime environment because of the movement of a vessel, weather and sun glare, and lens encrustation caused by saltwater, among other things.”

“A beach towel goes flying over the rail and the man overboard technology picks it up. Or maybe its a sea gull or whatever, but there are a lot of false positives,” the spokesman said when we talked to him. And ships don’t have the resources to respond to the number of potential false alerts, he said.

One cruise line official said if they are going to spend money on this type of technology, "they want to be sure it does not produce inaccurate results that could result in increased operational costs such as conducting unnecessary searches or disrupting an itinerary, among other costs,” the report says. The cruise lines interviewed for the report also said they worried that if the system didn’t alert when a person went overboard they would be exposed to litigation for not conducting a search.

Cruise victim’s advocacy groups say ship security should be monitoring the cameras at all times so passengers can be seen going overboard in real time, not just after the fact. Two cruise lines said because of the large number of cameras on board continuous monitoring would not be feasible.

Because people falling overboard on cruise ships is relatively rare, and the risk of false alerts is real, the business case is challenging to justify.

For every 1,650,000 passengers there is one man overboard incident, according to cruise industry lawyer Larry Kaye. There were 23 incidents in both 2011 and 2012, compared to 20+ million annual passengers.

For an average cruise ship, it can be many years between incidents. In the interim, they must monitor all the false/nuisance alerts generated.

Almost all cruise lines have video surveillance now, according to CLIA. The organization says it hopes the government will provide guidelines on video standards times that are “risk-based” and take into account ship size, layout, design and passenger demographics rather than “arbitrary standards.”

We think it is unlikely the government is going to issue system design standards based on all those variables, and it will likely use more blanket rules like “cameras covering all exits” or “cameras that can watch the entire length of the bulkhead.”

CLIA says the government should limit video retention to seven days because the average cruise length is seven days. One cruise line said short retention times don’t cause issues because 95 percent of crimes on ship are reported within 24 hours. Another cruise line interviewed by the GAO said they already retain video for 14 days and doubling that would be a one time cost of $21.7 million.

A more realistic guideline from an evidence retention perspective, and being pushed by advocacy groups, is 30-90 days.

The Coast Guard hopes to release a Notice of Proposed Rulemaking [link no longer available] by June, but told the GAO that the regulation will likely be "performance based—focusing on what must be achieved—rather than prescriptive.” There is no time table when the final regulation will be released.

Additionally, two bills (S. 1340 and H.R. 2800), trying to establish surveillance requirements on cruise ships ahead of the Coast Guard were introduced in the House and Senate. The bills would put cameras in all common areas, establish rules for signage, and require video to be retained until 30 days after a voyage. Neither say anything about the man overboard technology.