Deploying delayed egress right is tricky even when codes allow it, and making sure you meet all the rules requires carefully picking product. Areas like California and Chicago have stringent rules when using delayed egress, because if employed improperly deaths or injury can result. A maglock from Securitron claims to solve those code pitfalls at the factory, and do it in a single device for thousands less than most delayed egress solutions. In this note, we examine the iMXDa Maglock, how it aims to meet code, and its cost compared to other solutions.

As noted in our Delay Egress tutorial, this is used to keep people in an area for a short period before allowing passage. In most jurisdictions, this period is not permitted to be longer than 15 seconds. If someone needs to escape an area, they must delay for this period as it counts down.

This control technique is useful in nursing homes, infant nurseries, or retail, where undelayed egress through emergencies exits can result in loss, theft, or lack of facility control. However, its use is not always permitted due to fears it may trap people inside buildings. This means that use of delayed egress is highly conditional and regulated, with several large jurisdictions permitting it only when certain conditions have been met. In the US, California [link no longer available] and Chicago are large markets with highly restricted use of Delayed Egress.

Rather than a kit composed of an exit device, countdown timer, alarm siren, or other multiple hardware pieces, the iMXDa is a single conventional sized maglock. The lock itself measures ~12"X3"X2", and is small enough to mount on a single door equipped with a closer without installation interference. The hold force is rated to 1200 pounds, and is dual voltage (12/24VDC).

The unit is built with a door position sensor and a springloaded armature that detects 'pressure' when the door is pushed while locked. The amount of gap the door can travel before alarming is adjustable, between 1/8" and 1". Unlike standard maglocks that do not allow any movement between the magnet box and armature, the iMXDa features a floating design. The image below shows this detail: 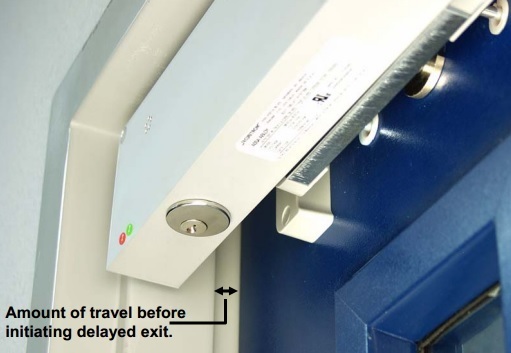 In order to release the maglock, the door only needs an open attempt. Depending on configuration, up to 2 seconds might need to expire before the 'delayed countdown begins - this is called the 'nuisance delay' to frustrate tampering or 'pranking' the door. The internal alarm begins to sound, drawing attention to the opening attempt. Once the delay period expires, the magnet automatically releases and allows unrestricted egress.

The unit is field programmable, using dip switches for a number of variables. However, some of the local codes include 'shall' and 'must' language that requires unit settings be fixed to certain points with no potential for adjustment. For California and Chicago, two variants are available with performance 'factory fixed' according to the matrix below: 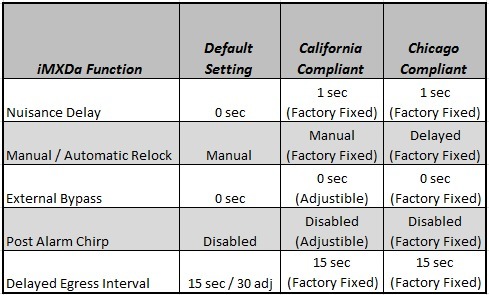 The number of other configurable functions means the default unit can be tweaked to customer's liking in the field. For example, if the customer found a two second nuisance period was more suitable for an area securing children, the unit could be switched. Unless the attribute is 'factory fixed', it has the option to be changed subject to local codes or use.

Aside from delayed egress function, the iMXDa can be used as a traditional maglock, connected in standard fashion to electronic access control systems, RTE devices, and fire alarm systems.

The maglock is less expensive to purchase and install than a traditional exit device delayed egress solution, like this ~$1300 example from Detex.

However, other 'smart maglock' products, like the SDC 'Exit Check' series are available for ~$600, although their acceptance by some AHJs in strict areas may not be approved because variables like 'Delayed Egress' interval, nuisance delays, and relock time are all subject to improper configuration.

Delayed Egress Access Control Tutorial on Feb 04, 2020
Delayed Egress marks one of the few times locking people into a building is...
Comments (1) : Subscribers only. Login. or Join.