Access control hardware cannot defeat a gunmen; but it can slow them down and buy precious minutes for responders to arrive. Locking classroom doors is one way to do this, but traditional hardware presents life safety issues. In the past decade, a newer style of lock - the 'Classroom/Intruder' Lock - has emerged as a key tool to slow down an attacker, yet stay code compliant. In this note, we examine this hardware and an example where it saved lives.

While most classroom doors in the US are made to lock, this is typically accomplished at the end of the day or when the classroom is emptied. The teacher or room monitor secures the door from outside the classroom (in the hall) before leaving. In an emergency situation, the teacher needs to physically exit the classroom in order to lock the door - exposing the teacher and students alike to a potentially deadly situation.

Existing hardware types are not able to address this vulnerability: because of the occupancy rating of a classroom, the 'traditional' thumbturned deadbolt feature of residential locks is not permitted by code. In an emergency egress situation, the thumbturn must be first used to retract the deadbolt before the door can be opened, conflicting with the 'unimpeded egress' safety codes that require only a single action to open a door (eg: turning a lever handle).

Because of the limitations of traditional locks in an emergency situation, locks with an entirely new mechanical function were created - the 'Classroom Function' lock: 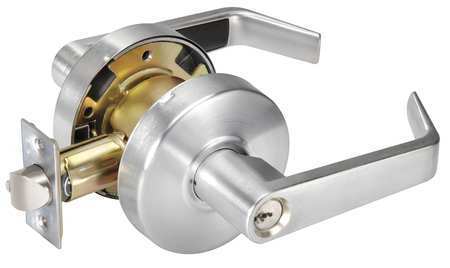 This lock resolves historical shortcomings by permitting the door to be locked from the inside. This is done by having key cylinders on both sides unlike traditional locks that only have on the outside. Additionally, a person seeking to exit, even when locked, simply turns the lever handle and can instantly leave the room if needed.

This lock function is often mistaken for "Entrance/Office" locksets [link no longer available]. However, the critical difference is that a "Classroom" function always requires a key to be locked, compared to "Entrance/Office Locks" that can simply be locked from the inside by pressing a button or turning a small knob.

Requiring a key ensures that only authorized users (i.e., teachers or school staff) can look the door. If schools attempt to use other types of inside-locking hardware, students are able to maliciously (or accidentally) lock classrooms out through bumping a knob button. Lock-outs would be very common and problematic.

Typically, the door is only locked when a teacher detects a problem - gunshots, threats, etc. This can be a vulnerability, since the teacher must have a key and enough presence of mind to engage the lock. Plus, the first classroom to be attacked may not have enough time to lock the door. Alternatively, they can keep the door locked at all times during class. However, this creates operational problems like letting people in who are late, are returning from the bathroom, etc. As such, this is rarely if ever done.

Typically, the additional mechanical complexity and added locking cylinder of the "Classroom" feature results in a cost difference of $50 - $100 per lock.

Take the example of the same Schlage ND series leverset below:

The main cost downside is that almost all schools have existing working locks, requiring the school to replace equipment in working order. Moreover, re-selling those removed locks is difficult or unlikely to capture significant value.

However, given the cost of implementing electronic access control that typically cost upwards of $1500 per door, applying "Classroom" function hardware is one of the least costly forms of physically protecting school rooms against intrusion threats.

With shrinking budgets being the most significant problem facing schools, any money committed to security improvements need to proven its value.

In 2008, the San Mateo school district voted to spend $263,000 to [link no longer available] outfit all classroom doors in the district with the ANSI F84 "Classroom Function" type. The cost of the proposal, which involved 581 doors, cost just over $450 per lock, including installation cost.

In 2009, a school in that same district had these measures tested when a student detonating pipe-bombs and armed with knives entered his High School with the alleged aim to kill and maim at random. Several teachers locked their doors during this event, preventing the active threat from entering classrooms and detonating bombs where students were huddled together. From an article detailing the event [link no longer available]:

"Gilbert also praises San Mateo Union High School District Superintendent Scott Laurence's decision to install locks on classroom doors for preventing [attacker] from getting to any of the students.

"In times of budget crisis you have to make some tough decisions but he felt like it was really necessary," Gilbert added. "Teachers can lock the doors and secure from the inside. That's something we drill on. When I got to the hallway yesterday, looked down, and saw the smoke in the hallway from the explosions, I saw two teachers reach out, check the door from the outside and pull it shut and locked it. So the locks worked. The teachers worked and everything worked out."

In this situation, the difference in hardware (and teachers responding accordingly) was directly credited in preventing a tragedy.

The classroom lock is one of the least expensive and simplest improvements schools can make. Unlike spending hundreds of thousands for new card reader or video systems, classroom locks are a far lower cost and more likely means to delay and hinder those attacking schools.

Barricade Locks - Pros vs Cons on Dec 03, 2015
The most basic rule of access control is 'never lock people in', but is the...
Classroom Closer Lock Illegal on Oct 28, 2014
Keeping classrooms locked against intruders is one the most urgent security...
Comments : Subscribers only. Login. or Join.