Where is Cisco going in the physical security market? In this note, we provide answers both to their overall strategy and to their specific announcements at the ASIS 2011 show.

Cisco held a major presentation this morning. Here is a slide from the presentation overviewing the general strategic shift: 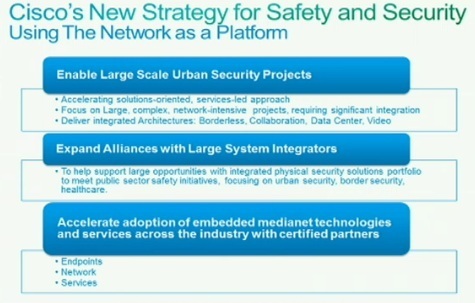 The Cisco announcement we believe has the greatest potential impact on the surveillance marketing is Cisco's opening of their MediaNet platform to 3rd party surveillance manufacturers (like camera and VMS suppliers).

For background on Cisco's physical security products, make sure to read:

This is a fundamentally different approach to the surveillance industry than pretty much anyone else (analog incumbent or IP video provider). Here are the key issues we see here:

For years, significant discussion has existed among the surveillance industry about what Cisco would actually do to or in the surveillance industry. As the years passed, their path is crystalizing. Cisco is not going to become a mass market surveillance products provider (short of a radical change in strategy). It is not simply that Cisco needs more time to build a 'regular' surveillance products portfolio, they are just not motivated to do so. The opportunity / threat for Cisco is for very large sale projects. While they are very few in number, they are large in total revenue, especially as they drive networking product sales.

Of Cisco's 4 new physical security announcements, the one we think has the most potential disruptive impact is opening of MediaNet to third party vendors. MediaNet aims to reduce the complexity and risk of deploying networks using video, one of the most common challenges in large scale IP video surveillance deployments. Until now, MediaNet was only available with Cisco's very limited number of IP cameras and their own VMS system (see our review of Cisco MediaNet). Now, Cisco plans to allow other IP camera manufacturers and VMS suppliers to integrate with MediaNet.

As part of the announcement, Cisco disclosed VideoIQ, a company they invested in, as already joining the program. It is possible that companies like Axis or Genetec could join in the future but no other companies besides VideoIQ were announced today.

What's In It for Cisco?

Cisco's primary driver is selling network infrastructure (routers, switches, etc.). MediaNet is a competitive advantage for its products and only available on Cisco networking devices. To the extent that users find value in MediaNet, the greater likelihood of selling more Cisco networking products.

Cisco generates far more revenue in a surveillance deployment from the sales of networking products than from cameras so if they can expand network sales, even without camera ones, it is still attractive.

What's In It for Other Surveillance Manufacturers?

The two strongest potential drivers are:

We see three major questions on the impact of this approach:

Given Cisco's rocky path in the surveillance market over the last 5 years, while we think it is worth tracking, we definitely want to see how much actual progress this initiative makes. 2 years ago, the big news was the Cisco / Pelco partnership and that has not had much of a practical impact. Will this be any different?

Cisco Surveillance Problems - Case Study on Nov 14, 2011
An end user recently came to us with a detailed report about the challenges...
Winners and Losers Fall 2011 on Sep 25, 2011
Now that the dust has settled from the new announcements of the last month,...
New Surveillance Products Directory Fall 2011 on Sep 21, 2011
This report provides a summary of key announcements and news being made...
Cisco Restructuring Physical Security Business on Sep 17, 2011
After a rough 5 year period in the physical security industry, Cisco will be...
Comments : Subscribers only. Login. or Join.