When contrasting 'Western' and 'Chinese' camera manufacturers, cost is the most obvious but not the only differentiator between the two.

Integrated IR has emerged as an important advantage at the low end, combining with cost to deliver clear advantages.

Using the IPVM Camera Finder, we analyzed how dominant Chinese manufacturers have been here.

Looking at integrated IR cameras under $200, out of 91 cameras, 85 are Dahua, Hikvision, or their OEMs. Only six models are by others, with four of those consumer-focused cameras from Foscam, D-Link, and Samsung.

Much of these two manufacturers' dominance is a result of the growing HD analog trend, with IP comprising only a third of these models under $200.

Until only a year or two ago, integrated IR illuminators were seen as a "cheap" or "gimmicky" feature by many manufacturers. Many incumbents, such as Axis, Bosch, Sony, etc., added IR to their line late, and included it only as a high end feature in expensive models. For example, Axis' first P series integrated IR domes sold for $900+, while Bosch's first model was the specialized NEI-30 long range imager, with a whopping $2,000+ price tag.

Even today, these manufacturers' integrated IR models sell for significantly more than low cost models from Hikvision, Dahua, and their OEMs. The lowest cost IR model from Axis, Bosch, and Sony:

These prices are 2-3x more expensive than low cost IP models from Dahua/Hikvision, generally in the range of $100-120. HDCVI/HDTVI models further widen this gap, selling for as little as $30-40.

Clearly, the market has taken to integrated IR.

In our surveys, integrators answered that a third of the cameras they deployed included integrated IR. 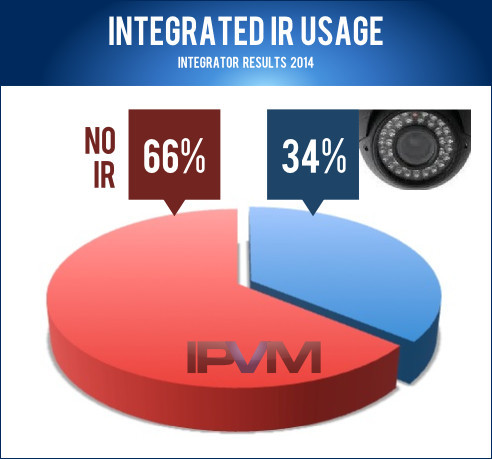 Morever, many respondents answered that nearly all cameras they used were integrated IR, and even those who did not regularly use it commented that it was a growing trend.

By choosing not to compete with Dahua, Hikvision, and others in this market, many manufacturers are simply surrendering this segment.

Low-Cost IR "Good Enough" For Many

Some have pointed out issues with integrated IR found in low-cost models, such as hotspots, uneven coverage, and overstated range. In our testing, we have found these issues to be true in many cases.

However, without IR, many low cost models from both western and eastern manufacturers, are essentially "blind", unable to produce a usable image at even 1-2 lux. This image, taken from a recent test, demonstrates this: 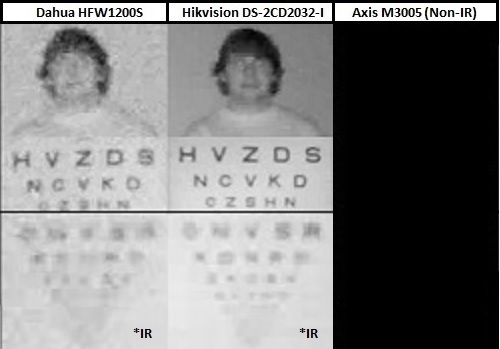 With this in mind, while improved features such as super long illumination range or adaptive IR are desirable, clearly there is a market for low cost IR as well.

For the foreseeable future, we expect Dahua/Hikvision dominance of low cost integrated IR to continue. Some others, such as Samsung (with their Wisenet Lite series), ACTi, and D-Link, have released lower cost models in the past 1-2 years. But based on new products seen at ISC West and otherwise, majors such as Axis, Bosch, Sony, etc., do not seem aggressive at competing here.